In March 2017, the London Stock Exchange Group (“LSEG”) announced a new debt multilateral trading facility (“MTF”) targeted at institutional and professional investors, the International Securities Market (the “ISM”). The ISM was officially launched on 8 May 2017, and the first securities were admitted to trading on the ISM on 15 May 2017.

The ISM was introduced to provide greater choice for a variety of fixed-income issuers, by granting access to London’s pool of global capital and international investor base. The ISM is an exchange-regulated MTF (rather than a regulated market), and, as such, is positioned as a direct competitor to other popular European exchange-regulated markets, Euronext Dublin’s Global Exchange Market (“GEM”) and the Luxembourg Stock Exchange’s Euro MTF market.

Two years on from its launch, we look at how the ISM has developed, as well as recent changes to legislation and the ISM Rulebook.

What is the ISM, who is it for and how does it differ from the main market?

When announcing the launch of the ISM in 2017, the LSEG noted that the ISM had been developed to meet issuer and investor demands to improve the effectiveness and competitiveness of the UK primary debt markets. With a customer-centric approach towards applications for admission to trading of bonds on the ISM, and less onerous disclosure requirements than under a Prospectus Directive-compliant EU regulated market, such as the LSEG’s Main Market, the LSEG aims to provide an efficient and expedient process for listing applications on the ISM.

The introduction of the ISM has also sought to bolster the LSEG’s efforts to curb the decline in recent years of corporate bonds being listed on the LSEG’s markets and the perceived switch of a number of issuers and securities to other exchanges in the European Economic Area with increased options for debt securities, in particular the Luxembourg Stock Exchange and Euronext Dublin (previously, the Irish Stock Exchange).

In addition to plain vanilla debt offerings, the ISM holds itself out as an attractive market for more specialized and complex products, including:

The ISM operates alongside the LSEG’s other markets for fixed income securities, including the main market and the professional securities market. The majority of debt securities listed in the United Kingdom are listed on the LSEG’s main market, a regulated market, and are admitted to the standard listing category. The listing of these securities on a regulated market requires a prospectus to be reviewed and approved by the UK Financial Conduct Authority’s UK Listing Authority (the “UKLA”) for compliance with Prospectus Directive requirements. The UKLA review process can often be time consuming and may become more burdensome following the entry into effect of the remaining provisions of the new Prospectus Regulation on 21 July 2019.

The admission of securities to trading on the ISM is outside of the scope of the EU Prospectus Directive (and, with effect from 21 July 2019, the EU Prospectus Regulation) and the EU Transparency Directive, although (as with other MTFs in the European Economic Area) issuers with securities listed on the ISM are subject to the EU Market Abuse Regulation. Securities admitted to trading on the ISM are not listed on the Official List maintained by the UK Financial Conduct Authority, with admission to trading and approval of the admission document by the London Stock Exchange only.

A summary of certain key differences between the process for listing debt securities on the ISM and the main market of the London Stock Exchange is set out in the following table: 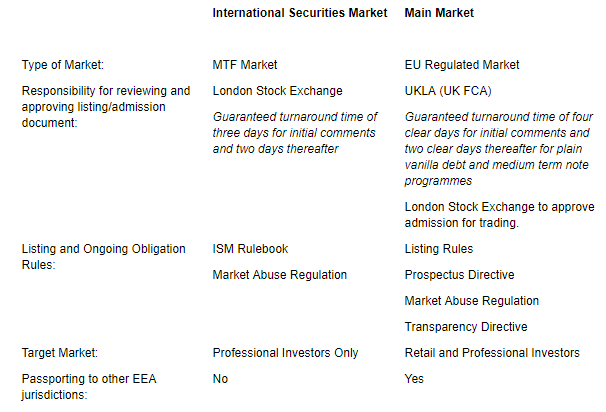 How successful has the ISM been to date?

Since its launch in May 2017, bonds from issuers across different continents and industry sectors (including energy, financial, government, healthcare, industry and utilities) have been listed on the ISM and, as at 7 March 2019, a total of 56 instruments were listed on the ISM, with a total principal amount of US$18.5 billion. The currencies of instruments listed on the ISM to date include Australian Dollars, Euros, Fijian Dollars, Ghanaian Cedi, Indian Rupees, Indonesian Rupiah, Japanese Yen, Philippine Pesos, Pounds Sterling, Swedish Krona and U.S. Dollars.

While the ISM has a considerable way to go to challenge the market dominance of the well-established GEM and Euro MTF markets, with 18,524 listed securities on GEM as of 9 May 2019 and listings on the Euro MTF accounting for approximately 40 percent of all securities listed on the Luxembourg Stock Exchange, the LSEG is maintaining an exerted effort to market the ISM to new issuers and groups of investors across various asset classes.

One of the principal potential challenges of the ISM identified on its launch was that it did not benefit from the same UK withholding tax advantages as the GEM and Euro MTF markets, as it was not listed as a “recognized stock exchange” for the purposes of Section 1005 of the Income Tax Act 2007 and, accordingly, did not fall within the “quoted Eurobond exemption”. In order to appeal competitively in a cross-border context, it was necessary for a level playing field to be established between the ISM, GEM and the Euro MTF. In response, the definition of “quoted Eurobond exemption” has, with effect from April 2018, been widened to apply to securities admitted to trading on an MTF operated by an EEA-recognized stock exchange (which includes the ISM).

Following a public consultation, on 25 February 2019, the LSEG published an amended version of the ISM Rulebook. The amended ISM Rulebook includes, among other changes: (i) amendments to permit the admission of insurance linked securities to trading on the ISM; and (ii) the ability for issuers to incorporate by reference in their admission document any information that has been published in accordance with Article 1 of the Market Abuse Regulation.