According to Article 129 of Brazilian Industrial Property Act (Federal Law 9279/96), a trademark registration grants the owner exclusive rights upon its use within the Brazilian territory. In sequence, however, article 132, III sets forth that the owner of the trademark will not be able to restrain the free circulation/commerce of its product/mark, after it has been placed on the national market by the owner itself or by a third party to whom the owner has given its authorization.

This means that if the owner or any authorized party first sells the product in Brazil, the trademark owner’s rights to control future sales in the country are exhausted/ceased.

Brazil, thus, has chosen the national exhaustion system of Industrial Property rights. After the first sale of the product in the country, the owner can no longer interfere in the free commercialization of its mark inside the national market. However, this first sale must be made by the trademark owner or with its consent. Considering this, parallel import is indeed considered an unlawful practice in Brazil.

Despite that, companies often misunderstand the national exhaustion system. Such confusion is common with companies that remanufacture/refurbish original products and sell the product inside the national market as well (usually through processes that do not follow the same quality patterns and strict controls adopted by the owner of the trademark).

Brazilian courts have consistently warned against unlawful practices of remanufacturing, refurbishing or reconditioning a product through a process which does not remove the original trademark from it, and/or leave behind visual elements that allow consumers to identify the original product, as it may cause brand dilution by obfuscation, and loss of trademark distinctiveness (Appeal No. 994.09.039352-0, 7th Chamber of Private Law of the São Paulo State Tribunal).

In addition, the Brazilian Superior Court of Justice (STJ) - Special Appeal RESP 1207952/AM – with respect to this matter states that: “with regard to the principle of exhaustion of rights, it is certain that it cannot be applied when the company acquiring the products, refurbishes and/or reconstructs them, reintroducing them into the market, harming both the trademark owner and its representative, with whom it has this first exclusive contract, aiming to profit and harming a company that uses resources acquired after years of research and investments in order to commercialize its machines, built with the latest technology, as the case in analysis” (highlighted by us).

This discussion is even more relevant to the segment of tires, as the remanufacturing activity is authorized by all government agencies, generating jobs and taxes. This is similar to the case of the retreaded or “remolded” tires segment and those obtained through the so-called “remold” technique[1]. Specifically, with respect to tires, it means saving and reducing the environmental impacts of its production process.

Therefore, the activity of reusing tires, itself, is not illegal. However, if by the reconditioning, the original trademark is not removed from the remanufactured product, the remold tire is indeed a counterfeit one.

Recently, Bridgestone and its Brazilian subsidiary – Bridgestone do Brasil – filed a lawsuit against a retreading company located in Goiás State (Proceeding No. 1000078-42.2015.8.26.0554), due to the improper use of Bridgestone’s known mark TURANZA, and the tread design of the original tires (trade dress of the original product).

The court issued injunctive relief – which was ratified at the end of the lawsuit –  ordering the Defendant to immediately cease the remanufacturing and commercialization of the infringing tires stating that: “although the retreading process itself is not illegal, with the use of original tires made by the Plaintiffs, the Defendant should change the product, removing the original trademark from it, and replacing it with its own brand” (Appeal No. 200.808.4 /0-00, Judge Ênio Zulliani, referring to the activity of reconditioning used tires)”.

The below pictures of the genuine and infringing tires give a glimpse of the possibility of confusion, as no one could tell them apart: 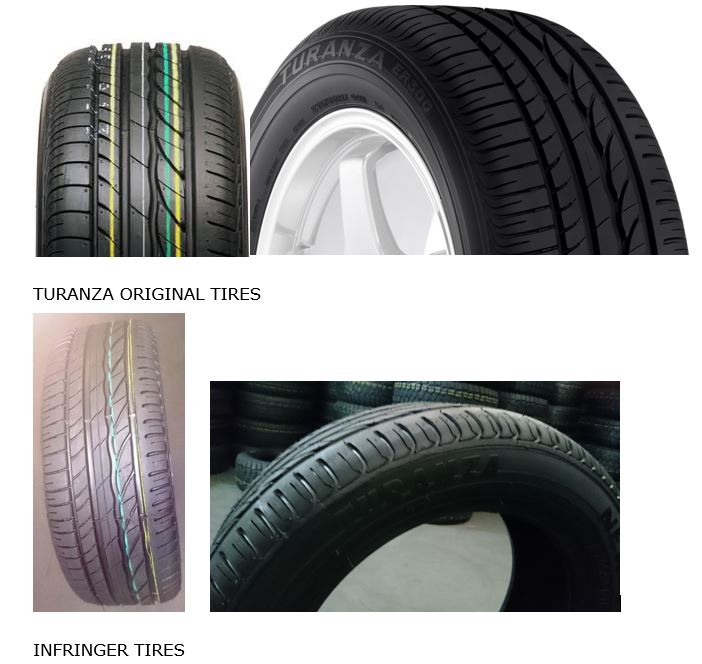 Another similar lawsuit filed by Goodyear Tire & Rubber Company (Proceeding No. 2004.001.127829-4), in which the Plaintiff pursued an injunction to order the Defendant to cease the use of original tires brand on the remanufactured products, the 3rd Corporate Court of Rio de Janeiro ruled, among other things, that: “it is irrelevant, therefore, that the Defendant's tire market is not the new tires market, such as the Plaintiff's, but retreaded tires, since there is a possibility to divert consumers to this market from the Plaintiff’s.”.

According to Professor Celso Delmanto, in Crimes de Concorrência Desleal, USP, 1975, pages 83/84: “‘diversion of customers‘ is perhaps the most frequent of unfair competition crime, in view of multiple ways of fraud, starting as confusion with the competitor's product, in a way that someone may find it confusingly similar with the original brand”.

The remanufactured product will not provide any of the guarantees normally given by the manufacturer company, which in turn has no commitment to the purchaser or indeed profit from the resale. So, when remolding tires, it is not sufficient to merely inform that the product is a remold, as any reference to the genuine trademark and tread design must also be withdrawn. By having the original brand affixed to a remold tire, consumers will have a false idea that it is purchasing the genuine one, which is prohibited by the Brazilian legislation.