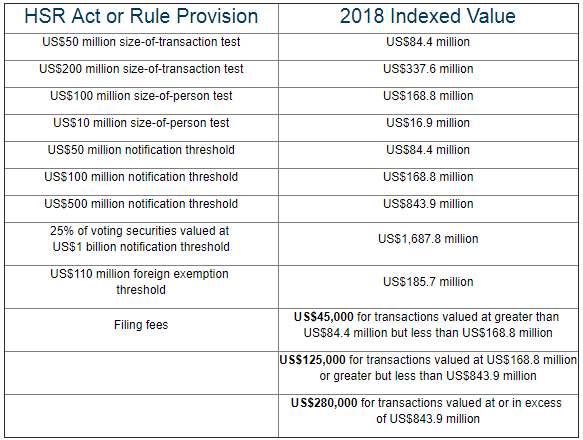 The U.S. Federal Trade Commission (“FTC”) announced on January 26, 2018, that the dollar-based thresholds applicable to the Hart-Scott-Rodino (“HSR”) premerger notification program will be raised about 4.4 percent from the 2017 levels. As a result, the HSR minimum size of transaction threshold will be raised to US$84.4 million from US$80.8 million. Transactions valued above the old threshold of US$80.8 million but below the new US$84.4 million threshold will no longer require an HSR filing. The dollar thresholds that determine the applicable filing fee will also be revised accordingly.

Simultaneously, the FTC also increased the dollar thresholds under Section 8 of the Clayton Act, which prohibits any person from holding positions as an officer or director of competing corporations engaged in commerce, if the corporations meet certain size thresholds. The new Section 8 thresholds will take effect immediately upon publication in the Federal Register.

The maximum civil penalties for violations of the HSR Act are similarly indexed, and have increased from US$40,654 per day to US$41,484 per day, effective as of January 22, 2018, the date of publication in the Federal Register.

The HSR premerger notification program applies to large transactions involving large parties engaged in commerce. Dollar thresholds defining “large” were increased in 2000 from US$15 million to US$50 million and, since 2005, have been indexed to reflect changes in the gross national product (GNP). The following graph illustrates the changes in the HSR minimum size-of-transaction thresholds, as compared to changes in the GNP since 1978, when regulations implementing the HSR Act first went into effect. If the US$15 million minimum size-of-transaction threshold in 1978 had been indexed to changes in the GNP, it would be at approximately US$129.5 million rather than US$84.4 million. 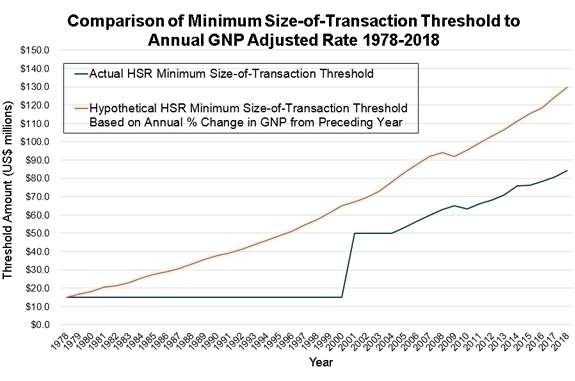 Section 8 of the Clayton Act generally prohibits a person from serving simultaneously as a director or officer of two sizable competing corporations engaged in commerce, unless their “competitive sales” — the gross revenues for all products and services sold by one corporation in competition with the other — are minimal. As with the HSR Act, the dollar thresholds defining “sizable” and “minimal” are indexed to changes in the gross national product. As a result of the most recent indexing, the Section 8 prohibition on interlocking directorates now applies only if each competing corporation has capital, surplus, and undivided profits aggregating more than US$34.395 million. The interlocking directorate prohibition does not apply, however, if either corporation’s “competitive sales” are less than US$3.4395 million. Other “safe harbors” exist that are based on calculating the competitive sales as a percentage of the corporation's total sales.

The FTC’s press release announcing the indexing changes to the HSR thresholds and the interlocking directorates thresholds may be accessed by clicking on the link below. The press release contains links to the FTC’s official announcements.