The long-term vision is that 5G will empower the invention of thousands of new products, technologies and services, increase productivity and allow for new industries to emerge. A global 5G network will unify mobile communication in order to connect individuals and devices to everything through the Internet of Things (IoT), with 5G technologies linking vehicles, ships, buildings, meters, machines and other items with electronics, software, sensors and access to the Cloud. The past few years have shown that 3G and 4G patent holders have controlled how mobile technologies are used in the smartphone industry. Owners of 5G SEPs will likely become technology and market leaders, thus enabling 5G connectivity in various markets. Further, companies will have to use SEPs when implementing standardised 5G technology.

The IPlytics Platform integrates data from worldwide patents, SEP declarations, standards and contribution documents. The database shows patents that have been declared as essential for the 5G standard. Figure 1 illustrates how patent documents, declared SEPs, standards and contribution documents are integrated to allow a thorough analysis in all three connected databases. This approach allows the platform to precisely define whether a SEP declaration is 5G, 4G, or 3G relevant, or relevant for combinations of multiple standards generations. The following analysis is based on standards specifications that exclusively relate to 5G specifications. 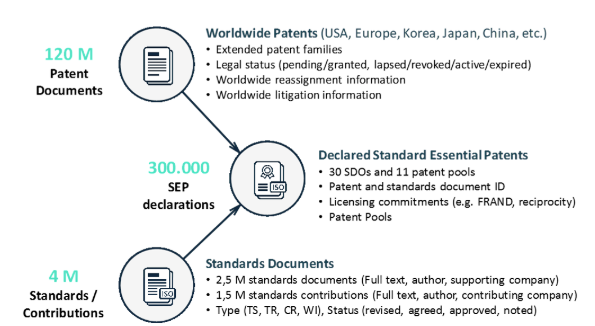 First, the IPlytics Platform’s database and analytics were used to count 5G declared SEP families as to the year of first priority, publication and application. Figure 2 illustrates an increasing number of 5G declared SEP families over the past five years. While the numbers have been increasing since 2015, the truncation effect of patents being published several months after the first application at the patent office must be taken into account. Further, there is a delay in publicly declaring patents as 5G standard.

Figure 2: Yearly number of declared SEP families for 5G as to year of first priority, publication and application (as of IPlytics Platform, July 2019) 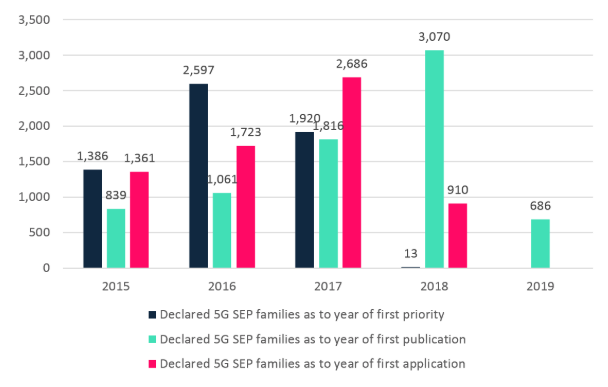 The main impact of the implementation of 3G and 4G was on the smartphone industry, whereas 5G will enable the connectivity of many objects and vehicles across the world through the IoT. Any sector subject to connectivity (eg, transport, energy, manufacturing, healthcare and entertainment) will make use of 5G and therefore use 5G SEPs. Successful 3G and 4G patent licensing programmes have provided evidence that patent royalty incomes are highly lucrative. Further, the target market for licensing 5G patents will increase since 5G patent holders will be able to extend their licensing programmes to permit multiple uses (ie, uses other than smartphones).

When looking at all 5G declared SEP families in the first column of Table 1, the Chinese company Huawei has the largest portfolio, followed by the Finnish company Nokia, the Chinese company ZTE and the South Korean companies LG and Samsung. Qualcomm and Intel are the largest US companies holding 5G declared SEPs, while Sharp and Fujitsu are the largest Japanese companies to do so. The order of patent portfolio size is similar when counting families that have been filed internationally (at the USPTO, EPO or under the PCT). However, when counting granted patent families, Nokia’s portfolio is the largest, followed by Samsung and LG. The Chinese companies Huawei (28%), ZTE (5%), China Academy of Telecommunication and Technology (CATT) (8.5%) and OPPO (16%) seem to have very low grant rates as of July 2019. However, the granting process may take several years. Since 5G is a recent technology, patents may have been filed very recently, but it can be assumed that many of the 5G declared patents will be granted in the future.

Table 1: Top patent owner of 5G declarations as to the number of patent families

In order to get a better understanding of the age of 5G declared patent families, the IPlytics Platform was used to create additional counts of patent portfolios, as presented in Table 2. The first column again shows the total number of 5G declared patent families. The second column provides the average age of the patent portfolio as of the application year. When looking at the average age, Nokia seems to hold the oldest portfolio, which is on average 11 years old followed by Qualcomm with a 5G declared portfolio with an average age of 10 years. The Chinese companies ZTE, OPPO and Huawei all have considerably young 5G declared portfolios, which could also explain the low grant rates of the previous analysis. Also, Intel has rather recently filed patents declared as essential for 5G.

Table 2: Top patent owners of 5G declarations as to the age of the portfolio

According to interviews with engineers that are members of 3GPP, it can be assumed that the main ideas concerning the new 5G technologies were invented in the past five years (ie, after 2012). The IPlytics Platform was again used to calculate the percentage of patents where the priority year (ie, the year when the invention was first sent to the patent office) of the declared patent family was before 2012 (third column of Table 2). Here, Nokia (57%) has a high share of 5G declared patent families, where the earliest priority was before 2012. In comparison, ZTE, CATT and Intel have 5G declared patents that were mostly invented after 2012 (eg, within the time period that is considered the most likely to include new 5G inventions).

Part two of the article “Who is leading the 5G patent race? July 2019 update” will provide analyses on 5G standards contributions as well as 3GPP meeting attendance data.