Who are the patent leaders in blockchain?

On 17 December 2017 one bitcoin was worth $19,783.06. Its worth grew to this from roughly $900 in just 11 months, while ‘bitcoin’ was the second most searched term in Google’s news section that year. Although the cryptocurrency bubble has now popped, a single bitcoin was still worth nearly $5,000 as of April 2019. While its future as a regular payment method remains unclear, it seems inevitable that the underlying technology – blockchain – will find many applications in the near future.

A blockchain is a growing list of records, called blocks, which are linked using cryptography. The birth of blockchain is often incorrectly linked to Satoshi Nakamoto’s 2008 white paper “Bitcoin: A Peer-to-Peer Electronic Cash System”. While he made the term popular, the idea behind it is older. Nakamoto cites Stuart Haber and W Scott Stornetta’s 1991 paper “How to Time-Stamp a Digital Document”, a method that is still widely applied to blockchain technology. Stornetta and Haber chained hashed time stamps and used the two underlying technologies behind blockchain – hash functions and linked (chained) lists.

Hash functions create an output (hash value) of a constant length from any given input. To hash means to chop something into tiny pieces. Hash functions can be likened to a meat grinder for data (eg, just as steak that has been turned into ground beef cannot be turned back into steak, the process of a hash function cannot be reversed). However, unlike this example, the process can be reproduced. Identical data put into a hash function will always result in an identical output. In theory, this means that you can find the input by inserting random data until the used hash function returns the same output. Practically, (for a modern hash function such as SHA256) this process would take millions of years with current computational power. Two very important aspects for the usability of hash functions are that the output of the data should be significantly smaller than the input and even tiny changes in the input data should result in significantly different hash values. For example, a modern website will never save a user’s password, it just saves its hash value. Whenever a user logs into a website with their password, it is hashed again and the resulting hash value is compared to the one in the database.

Another fundamental technology used in blockchain is linked lists, which store and, more importantly, structure data. Every element is linked with the previous element, thus creating a chain. Each chain link consists of data and a pointer (ie, an address to a location in the memory of a computer) – this links both elements together. A blockchain uses a hash value in each element of the chain to point to the next element. This hash value is generated by hashing the data of this element combined with the hash value of the previous element of the chain. Since the hash values are dependent on each other, changing a small piece of data in any of the elements would immediately lead to the whole chain’s consistency being corrupted. This, combined with the fact that the whole chain is saved on multiple computers, makes data that is saved on a blockchain nearly immutable and therefore ideal for contracts and other documents that should not be tampered with.

Who is patenting blockchain?

In order to identify blockchain-related patents, the IPlytics Platform database was used to perform an extensive keyword search of worldwide filed patents in the field of blockchain technologies. The search was based on the patent’s content, making use of state-of-the-art stemming and semantic indexing methods. The extensive full text search revealed 10,134 blockchain-related patent documents which are linked to 5,597 patent families (number of unique patents in the INPADOC database). Figure 1 illustrates the number of patent applications over yearly counts between 2008 and 2019. 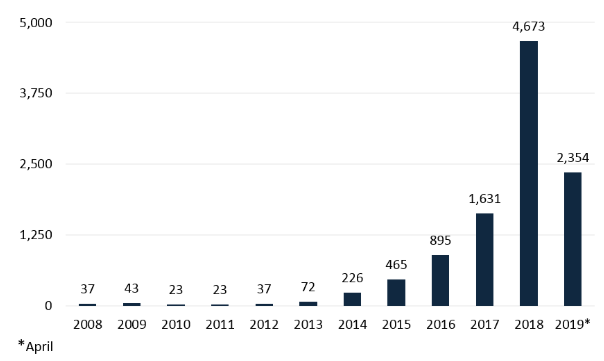 In order to identify patent ownership, IPlytics aggregates patents as to the patent portfolio of each company, making use of entity disambiguation techniques. Further, the patent applications are counted as to the corresponding patent family in order to count the number of unique patented inventions per company. Figure 2 shows that IBM, Intel and MBNA are the three strongest blockchain-related patent holders, measured by patent family size. Out of the top 10 blockchain patent owners, we identified one UK and nine US-based companies. 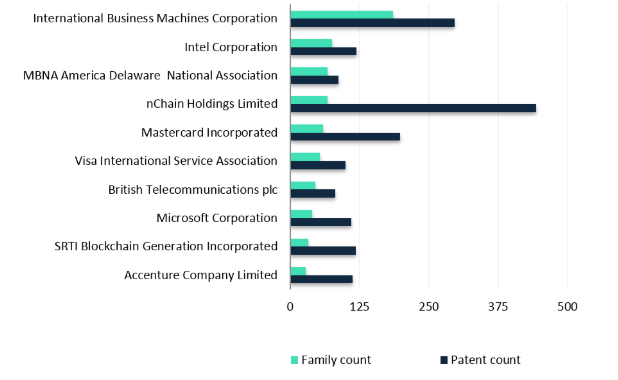 Figure 3: Patent applications as to country 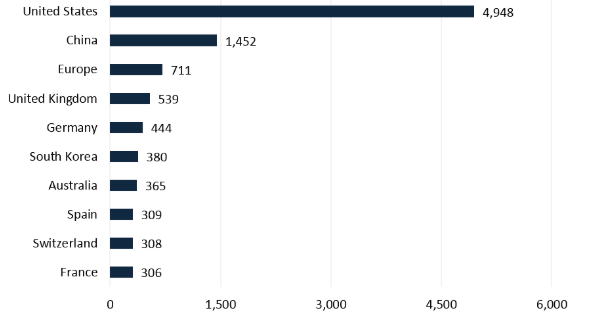 IPlytics makes use of statistical patent valuation indicators to analyse strengths, weaknesses and positioning of patent portfolios. In close collaboration with the Technical University of Berlin, Mines Paris Tech and Northwestern Chicago, IPlytics uses scientifically validated methods to calculate relevant indicators. In total, IPlytics integrated seven indicators, of which two are shown in Figure 4. The market coverage indicator estimates the patent family size by counting each country of a patent family divided by the country’s gross domestic product. The count is normalised and compared to industry averages (using International Patent Classification (IPC) or Cooperative Patent Classification (CPC), year and country). A high market coverage value reflects a global internationalisation strategy and a wide legal market protection. Further, a high market coverage value reflects a high-perceived patent value for the applicant. Patent application and patent maintenance fees create considerable costs at each patent office. The more countries in which a patent has been filed, the higher the perceived international market potential for the patented invention. Table 4 shows that eight of 10 blockchain patent portfolios of the Top 10 patent owners have extensive international coverage (a score higher than one is above average).

IPlytics connects patent data with company profiles, integrating over 4 million company and start-up profiles. A full text search in the companies’ description and website content revealed 2,899 active companies in the blockchain space. Figure 5 shows that the number of new blockchain start-ups and companies has been increasing over time to 777 in 2017. As to Figures 5 and 6, 80% of these companies have been registered in the past 10 years, 25% of which are located in the United States. The data shows that many small start-ups have also started patenting their blockchain-related business ideas.

Figure 5: Number of blockchain companies and start-ups as to the year founded

Figure 6: Blockchain-related companies as to the country founded

With new cases of blockchain use emerging almost every day, we are yet to see where blockchain technology will be applied in the commercial sector. While large corporations such as IBM and Intel have started to build blockchain IP portfolios, most patent ownership is still fragmented. We are seeing many small and innovative startups that file patent applications around their business idea. Senior IP managers and directors that work in industries where blockchain technologies have the potential to disrupt whole industry segments should also monitor and track the blockchain IP landscape. In cases where patent ownership is fragmented, it is important to monitor ownership changes and litigation. Bankrupt start-ups often sell their patents to NPEs, which acquire patent portfolios to assert them against industry players.