Major Operation Against Piracy and Smuggling in Brazil

Piracy and smuggling are grave dangers that haunt the owners of Intellectual Property Rights. According to data from the Organization for Economic Co-operation and Development (OECD), the trade of illegal products worldwide is worth about $ 461 billion annually.

In Brazil, a recent survey released by the Institute for Economic and Social Development of Borders (IDESF) and the Brazilian Association against Counterfeiting (ABCF) revealed that this illegal market registered losses that reached R$ 160 billion in 2018.

Such practices expose the victim companies to a series of incalculable losses, such as financial losses resulting from decreased sales, unsatisfactory consumer experiences with counterfeit products, brand image deterioration, among others.

Authorities have been incisively attacking this problem. In 2018 alone, the inspection of the foreign trade area of ​​the Internal Revenue Service seized R$ 3.15 billion in goods. This number is a historical record, representing a 40% increase over the total seizures registered in 2017 (R$ 2.25 billion).

The City of São Paulo is currently following this same line of confrontation and repression of the illegal goods trade. In 2019, together with the Civil Police - DEIC and the IRS, the city has been acting incisively against such practices, having banned 33 addresses exclusively dedicated to the sale of counterfeit products and taking almost 3,000 tons of fake products out of circulation, valued at approximately R$ 780 million.

In this context, we can highlight the recently concluded Operation Promitheia, performed by the IRS, with the support of the São Paulo City Hall. Over a period of  3 weeks, between September 2 and 20, the operation closed 2 of the largest trade and distribution areas for counterfeit articles in São Paulo, namely Shopping 25 de Março - Brás and Shopping Central (formerly Red Shop), both located in the Brás neighborhood, Central region of the city.

According to our surveys, in addition to the retail sales conducted in the malls in question, these merchants were also active in the wholesale market, supplying the street trade of the city of São Paulo and the irregular trade of municipalities throughout the country. Operation Promitheia was staffed by no less than 70 IRS officials, as well as hundreds of officers from the Metropolitan Civil Guard (GCM) and Mooca Subprefecture support teams, that checked 900 stores and seizure  43,497 bags of products valued at R$ 230 million.

The operation found counterfeit currency in many of the inspected boxes, as well as  attics full of irregular goods and small factories with sewing machines and counterfeit labels, where the products were finished for sale. We had the honor of being part of the select group of specialized offices that supported the realization of this gigantic operation, representing our clients, monitoring the work throughout the operation and providing the necessary support to the authorities.

We would like to recognize the competence shown by the institutions involved in these actions, especially the IRS and the São Paulo City Hall. We strongly believe in the importance of adopting such measures, which are essential for maintaining the activities of companies committed to contributing to the economic development of the country. 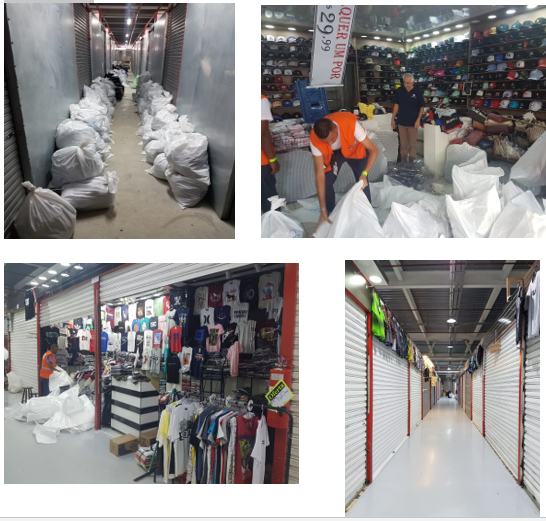