This briefing note is informed by analysis of the transactions on which we advised during 2018, together with other publically reported transactions and market data.

The glut of liquidity that has defined the leveraged buyout (LBO) market over the last 3-4 years continued into 2018, allowing borrowers to drive the market by increasing available leverage and generally securing favourable documentary terms. In a year which was shaped by increasing turbulence in Westminster as Brexit drew closer, we saw a healthy debt issuance in the UK and across Europe, including a number of opportunistic refinancings.

Whilst the loan markets remained in rude health in 2018, total debt issuance across Europe nudged down by 4% on the stellar levels of 2017. Although the LBO market was in fine health, refinancings were down by around 19% compared with 2017. Sponsor related dividend activity fell by around 70% in 2018 to 2.5 billion, bringing it more in line with the volumes seen in recent years other than the standout 2017. However, these trends appear to be principally attributable to the fact that a large number of more attractive borrowers have already taken the opportunity to refinance in 2016/17, rather than because market conditions have tightened.

Buyout activity represented 71% of the total European issuance, making it the busiest year for such activity since 2007. A principal driver for this increase in M&A issuance has been larger deal size rather than an increase in volume, with 2018 witnessing average LBO sizes swell to a record 691 million, up from 447 million in 2017 and 353 million in 2016. 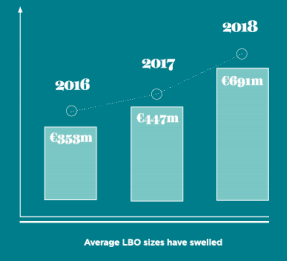 Leverage continues its inexorable march northwards with first lien leverage across all deals hitting an alltime record of 5x (the highest level since records began in 2001). LBO financings reached an average total leverage of 5.5x (the highest level since 2007), and deals leveraged at 6x or higher accounted for 37% of total issuance, the greatest proportion since the 51% recorded in 2007. However, average equity contributions also rose from 44% in 2017 to 48% in 2018, reflecting high purchase multiples.

With a short window to go until the 29 March 2019 Brexit deadline, it seems unlikely that there will be a flurry of new issuance out of the UK in early 2019, as lenders and purchasers are expected to adopt more of a 'wait and see approach'. That being said, our view is that the large amount of dry powder held by private equity and private debt funds which has been raised over the last 24 months is likely to encourage further fresh M&A-driven financing activity in the UK once the terms of Brexit have become clearer.

It should be noted that 2018 was a record year for CLO issuance in Europe (building upon strong years in 2017 and 2016). The funds raised by new entrants to the market, particularly Japanese managed accounts, and familiar names who have raised successor vehicles are likely to drive competition for paper throughout Europe in 2019 and have significantly buoyed liquidity in the market technical dynamics which are likely to keep terms favourable for borrowers and so drive refinancing activity.

Whilst there are significant external factors which may have a negative impact on the finance markets, such as economic turbulence in Italy, political unrest in France, US-China trade policies and (of course) Brexit, the level of dry powder and the expected 2019 deal pipeline which is already starting to fill out, gives cause for optimism heading into the new year.

In 2018 direct lenders consolidated the strong market position that they have been building over the last 3-4 years and they now hold a share of around 50% of the UK mid-market for the first time. When all deal sizes and European jurisdictions are included, that slips to around 35%, which is nonetheless impressive given that most of the largest transactions are still underwritten by investment banks.

Any Brexit-induced economic slowdown could be expected to put a dent in the deployment ambitions of debt funds. However, it could also serve as a stimulus for direct lenders to branch out beyond the UK and strengthen their footholds in other European markets (other than Germany where the direct lending product has matured in parallel with the UK).

It is also important to note that benign fundraising conditions have allowed direct lenders with a strong brand and track record to raise funds of an unprecedented size in 2018. Building scale enables direct lenders to increase ticket size and there are a growing number which are able to hit the 300m mark for a single transaction, strengthening their firepower in competition with the traditional underwriting banks.

Although default rates remain low, 2018 has seen direct lenders having to develop an approach to underperforming borrowers. Whilst there are few statistics given the secretive nature of turnaround and restructuring plans, our direct experience coupled with conversations with other market sources suggests that the fears of some sponsors about the behaviour of direct lenders when it comes to enforcement have not proved well-founded. Generally, direct lenders appear to have been amenable to supporting situations where sponsors/shareholders are still engaged and have not sought to offload credits at the first signs of trouble.

Non-amortising structures (whether traditional bank-arranged term loan B or direct lender unitranche/stretched senior structures) continue to be the preferred solutions for sponsor-backed deals, allowing cashflow to be invested in portfolio company growth rather than servicing debt repayments.

In the bank club and syndicated markets, 88% of new issuances in 2018 were covenant-lite (i.e. contained no maintenance financial covenants), up from 71% in 2017 and 60% in 2016. Whilst direct lenders have, for the most part, resisted the imposition of covenantlite structures and have retained a leverage covenant (at least), 2018 has seen sponsors chip away at the protection afforded by that key covenant in a number of ways:

Buyout represented 71% of total European issuance, making it the busiest year for such activity since 2007

THE END OF LIBOR

As market participants begin to prepare for the abolition of LIBOR, which will occur in 2021/2022 (the FCA confirmed in November 2017 that panel banks will continue to submit LIBOR rates until at least the end of 2021), recent data gathered by the LMA suggests that 18% of lenders are already offering leveraged loans which use the Sterling Overnight Index Average (SONIA) as a base rate, and a further 47% of lenders anticipate that they will be offering such products within 12 months. The FCA has noted that development of 'risk free rates' ("RFRs") so called largely because they are backward looking and do not take account of bank credit risks is likely to eradicate the price differential which currently exists between different LIBOR tenors (i.e. 1, 3 and 6 month LIBOR). Currencies other than sterling will have their own RFRs SOFR, which applies to USD loans, has been published since 3 April 2018 and the European Central Bank is expected to begin publishing ESTER, the euro RFR, in October 2019.

Aside from erosion of the protections offered by a leverage covenant detailed above, 2018 was a year of evolution rather than revolution in the sphere of documentary terms. Some of the key battlegrounds between lenders and borrowers which we observed over 2018 include the following: