The European Union IP Office (EUIPO) and European Patent Office (EPO) have teamed up to present a report on the relationship between IP activity and the growth potential of European SMEs. Such businesses are a critical component of Europe’s economy, producing 57% of the EU’s GDP and employing two out of three employees. The few that are high-growth firms (HGFs) are of particular significance.

While this study acknowledges that the filing of IP rights alone is not enough to trigger growth, it highlights that their ownership can signal a company has a greater capacity to sustain growth. We have gone through the 86-page report to find the top takeaways. 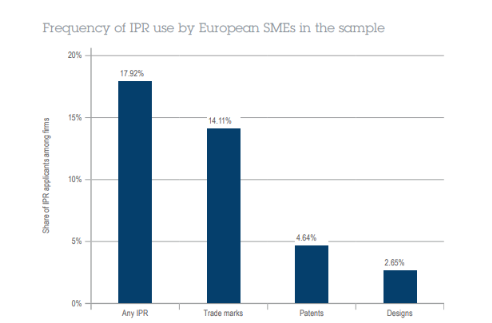 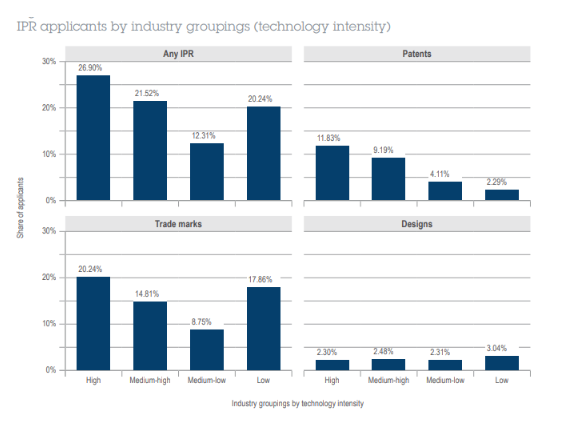 Tech-intensive companies are the busiest IPR filers. Although low-tech SMEs do not file as many patents, they do invest heavily in trademarks which means they are still highly represented.

3. SMEs that file for IPR protections have a higher likelihood of growth

4. SMEs that have filed a European IPR have a higher chance of becoming an HGF

The use of European rights is more strongly associated with future growth. SMEs which have filed for a European IPR have a 17% higher likelihood of experiencing a high growth period, compared to 6% for companies which have only filed nationally. SMEs with one European patent application have a 34% higher chance of becoming an HGF. Interestingly, the possession of only national patents is not found to be significantly correlated with a greater likelihood of high growth.

5. High-tech SMEs with a patent granted by the EPO are far more likely to achieve high growth status

The best way to understand high growth potential in high-tech and low-tech sectors is by analysing prior patent filings. For those in high-tech, the likelihood of high growth is 110% higher for SMEs that have filed one or more patents at the EPO. Since there is a much lower chance of patents being filed in the low-tech industries, those which have filed at the EPO have a 172% likelihood of becoming an HGF.

6. SMEs that have filed for IPRs have a higher median turnover 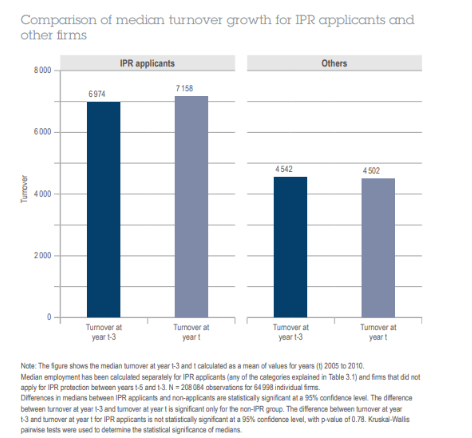 Median turnover for SMEs with IPR protection is about €7 million, which is nearly 50% higher than the median initial turnover reported for other SMEs. Further, the study found that SMEs which invested in IPRs were much larger in size, with an average of 43 employees (at the beginning of the analysis), compared to 33 employees for other companies.

7. Trademarks are a key component of an effective IP strategy 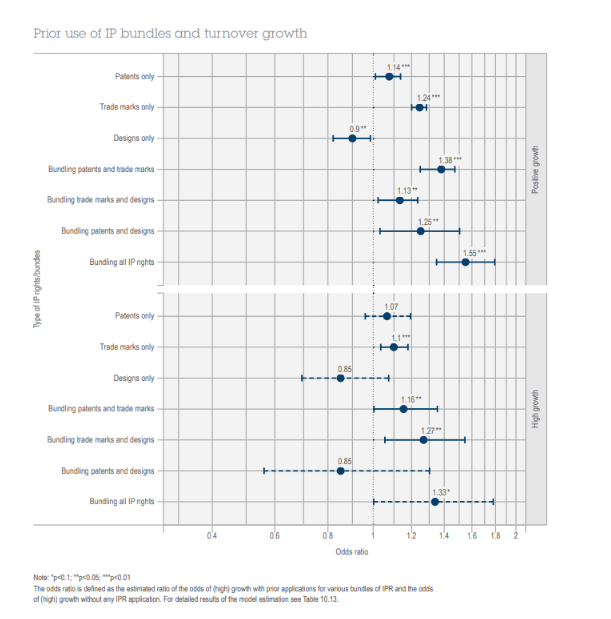 SMEs that file for multiple types of IPRs rather than focusing on a single category are 33% more likely to achieve high growth. Moreover, portfolios which include trademarks as well as another asset outperform other combinations and stand-alone IP rights.

The data analysed covered European SMEs in manufacturing industries from 2005 to 2010, and the conclusions drawn do not denote causal effect but show correlation. All data and images were sourced from High-growth firms and intellectual property rights: IPR profile of high-potential SMEs in Europe.