The Chicago Mercantile Exchange (CME) and the CBOE Futures Exchange (CFE) on December 1, 2017 self-certified contracts for bitcoin futures products with the U.S. Commodity Futures Trading Commission (CFTC).1 Additionally, on this date the Cantor Exchange self-certified bitcoin binary options.2 Subsequently, on December 12, 2017, the CFTC published a dedicated virtual currency resource Web page that the CFTC states will act as a central bank for “Commission-produced resources about virtual currency”.3 These events, together with other recent developments (such as PricewaterhouseCoopers’ November 30 announcement that it has accepted payment in bitcoin for its services),4 have further demonstrated the increasing acceptance of cryptocurrency into the financial mainstream. This Dechert OnPoint focuses on the two recently self-certified futures contracts, as a market in bitcoin futures did not previously exist.

The two Chicago exchanges offer different contract specifications for traders, as well as different pricing methodologies. The CME will use an in-house reference rate eponymously named the Bitcoin Reference Rate (BRR), which aggregates trading information from several major bitcoin spot exchanges in order to derive a daily U.S. dollar price for bitcoin. The CFE will rely on the daily auction price from Gemini, a daily virtual currency exchange run by Cameron and Tyler Winklevoss, who have been involved in the bitcoin markets for several years. Both the CME and CFE bitcoin futures products will be cash-settled.

There are important differences in how the futures contracts are themselves structured.5 The BTC contracts will be traded in five bitcoin units as defined by the BRR. The underlier for the XBT contracts will be one bitcoin. Because the XBT contract will be one-fifth the size of the BTC contract, it will likely attract more non-institutional traders as it will provide less exposure and require posting much less margin to trade each contract.

There are several indications that both the CME and CFE anticipate that bitcoin futures trading will be extremely volatile. Notably, as of the date of the publication of this Dechert OnPoint, the CME had set the initial margin rate for its bitcoin futures at 47% of the notional value of the contract, and the CFE had set the initial margin rate for its bitcoin futures at 44%.6 Initial margin is an up-front payment made by traders prior to entering into a futures contract trade. Initial margin is intended to cover losses in the event that maintenance margin (also known as variation margin) which is posted daily, is not adequate to cover losses. Both of these margin rates are far in excess of initial margin rates for other futures contracts, which usually work out to being set somewhere between 1% and 10% of notional value, or 110% of maintenance margin. Prior to trading beginning in both contracts and in response to volatility in the underlying bitcoin markets, the CME and CFE each raised the initial margin amounts by a substantial amount from the amounts they had originally planned to require. The Options Clearing Corporation will be clearing the XBT contract traded on CFE, while CME will clear its own contract.

Below is a table summarizing key similarities and differences between the BTC and XBT products: 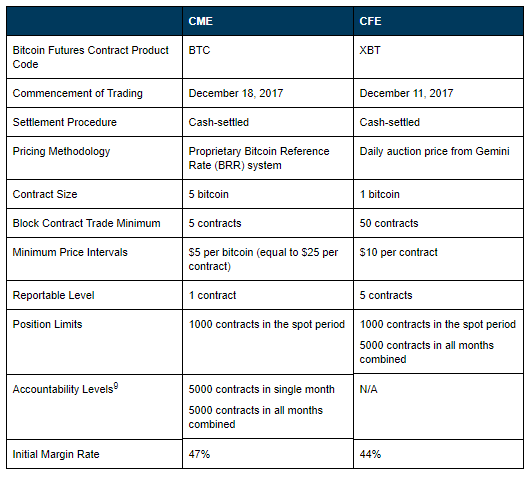 The launch of bitcoin futures trading has important implications for funds, including investment companies registered as such under the Investment Company Act of 1940 (registered funds). No publicly offered funds that provide exposure to bitcoin are yet available. A number of non-registered funds that would have traded on an exchange (ETPs) filed registration statements with the U.S. Securities and Exchange Commission (SEC), but the SEC disapproved filings made by the exchanges that would have permitted those ETPs to list and trade.11 The commencement of bitcoin futures trading may address some of the concerns raised by the SEC in disapproving those filings. Further, those ETPs would have held bitcoin directly and would not have been registered funds for a variety of reasons, including because investment companies must hold at least 40% of their assets in securities,12 and the CFTC has determined that bitcoin itself is a commodity.13 Thus, funds that would hold a substantial amount of bitcoin would not be able to meet the 40% securities test to be classified as investment companies unless they also hold other assets that are securities. However, funds that would trade bitcoin futures would also hold cash and similar instruments (e.g., U.S. Treasuries) as margin for futures trades, thus allowing them to meet the securities test. A number of sponsors filed registration statements in recent months, prior to the commencement of trading in bitcoin futures, for registered exchange-traded funds (ETFs) and non-registered ETPs that would obtain exposure to bitcoin through futures contracts; some of those registration statements were withdrawn on the basis that such filings were premature due to the fact that bitcoin futures contracts were not yet available for investment. However, in connection with the recent commencement of bitcoin futures trading, a number of new registration statements for such ETFs and ETPs have been filed.

Implications for Registered CPOs and CTAs

After bitcoin futures trading began, on December 14, 2017, the National Futures Association (NFA) announced a new reporting requirement for registered commodity pool operators (CPOs) and commodity trading advisors (CTAs) that trade either or both the underlying virtual currency and virtual currency derivatives (which would include virtual currency futures, options and swaps) (collectively, virtual currency products). Effective immediately, upon commencing engaging in trading in virtual currency products in pools or accounts, registered CPOs and CTAs will need to update the portion of their annual questionnaire that addresses firm-level information which is located in the NFA online registration system (ORS), by clicking “Firm and DR Information” in the questionnaire index and answering the following questions, as applicable:

The NFA also announced that beginning with the first quarter 2018, registered CPOs and CTAs will be required to report the number of pools or accounts that executed transactions in virtual currency products during that calendar quarter. This reporting will be due to the NFA within 15 days of calendar quarter-end and will also be accomplished through the annual questionnaire.14

The launch last week of the CFE bitcoin futures contracts and this week’s launch of the CME’s similar futures contracts could have a number of ramifications for the markets, both long- and short-term. First, these futures contracts could allow for a wider base of investors to gain exposure to bitcoin and participate in this market where an understanding of cryptocurrency wallets, private and public keys and similar topics, while helpful, would no longer be necessary. Second, these launches and self-certified contracts, along with recent initiatives such as LabCFTC,15 could be a sign that the CFTC will be taking an increasingly leading role in integrating bitcoin into the overall U.S. regulatory regime. However, serious questions remain as to how the CME and CFE will need to adapt in the weeks and months to come as the market develops.