In the final days of California’s 2018 legislative session, and the end of his term, Governor Jerry Brown has signed into law a variety of employment bills, including a flurry of new legislation seeking to bolster the state’s workplace harassment laws in the aftermath of the #MeToo movement. Conn Maciel Carey LLP provides this summary of key new employment laws impacting California private sector employers. Unless otherwise indicated, these new laws just took effect on January 1, 2019.

Existing law requires that employers with 50 or more employees provide at least two hours of sexual harassment training to all supervisory employees within six months of the individuals becoming supervisors, and at least once every two years thereafter. Covered employers must provide classroom or other effective interactive training that incorporates the topics of sexual harassment and abusive conduct as well as harassment based on gender identity and expression and sexual orientation.

Limits on Confidentiality of Settlement Agreements

Limits on Non-disparagement Clauses and Releases in Employment Agreements

SB 1300 imposes limitations on employment agreements designed to strengthen the protections from workplace discrimination and harassment under California’s Fair Housing and Employment Act (FEHA). Specifically, the law makes it unlawful for an employer to require an employee to release a claim under FEHA, as a condition of employment or continued employment or in exchange for a raise or bonus. The bill also prohibits employers from requiring an employee to sign a non-disparagement agreement or other agreement preventing the employee from disclosing information pertaining to sexual harassment or “any other unlawful or potentially unlawful conduct.” Such agreements are now unenforceable.

However, these new restrictions do not apply to negotiated settlement agreements resolving any underlying FEHA claim that has been filed by an employee in court, before an administrative agency, or through an alternative dispute resolution forum or an employer’s internal complaint process.

In its prefatory declaration of intent, this legislation rejects the federal court decision, Brooks v. City of San Mateo, 229 F.3d 917 (9th Cir. 2000), by asserting that a single incident of harassing conduct is sufficient to deny summary judgment and will result in the case proceeding to trial if the harassing conduct has unreasonably interfered with the employee’s work performance or created an intimidating, hostile or offensive work environment. The legislation also rejects the appellate court decision in Kelley v. Conco Companies, 196 Cal.App.4th 191 (2011), by finding the legal standard for sexual harassment should not vary by type of workplace and that it is irrelevant a particular occupation may have been characterized by a greater frequency of sexually related commentary or conduct in the past.

Limits on Waivers of Right to Testify

Assembly Bill (AB) 3109 provides that any provision within a contract or settlement agreement entered into on or after January 1, 2019 is void and unenforceable, if it waives a party’s right to testify in an administrative, legislative, or judicial proceeding concerning alleged criminal conduct or sexual harassment, even though the party has been required or requested to attend the proceeding pursuant to a court order, subpoena, or written request from an administrative agency or the legislature.

Expansion of Privilege Protections for Communications Regarding Sexual Harassment

More specifically, AB 2770 authorizes a current or former employer to answer, without malice, whether the employer would rehire an employee and whether a decision to not rehire is based on the employer’s determination that the former employee engaged in sexual harassment.

Federal OSHA’s Rule to “Improve Tracking of Workplace Injuries and Illnesses” (aka the E-Recordkeeping Rule) requires small employers that operate in certain “high hazard industries” and all large employers to proactively submit their electronic injury and illness data to OSHA through a web portal – the Injury Tracking Application (“ITA”). California finally adopted an E-Recordkeeping Rule of its own, tracking the federal OSHA E-Recordkeeping Rule. On September 19, 2018, the governor signed AB 2334 largely in response to fed OSHA’s recent proposal to eliminate the requirement for large employers to submit 300 Log and 301 Incident Report data.

Approximately one month later on October 18, 2018, Cal/OSHA then published an emergency proposed regulation intended to temporarily adopt and implement the federal OSHA E-Recordkeeping Rule’s data submission requirements. The Cal/OSHA emergency regulations were approved by the California Office of Administrative Law and officially went into effect on November 1, 2018.

Who Must Submit Injury Data?

Covered establishments are required to submit 300A data through federal OSHA’s ITA portal by the deadlines specified in the emergency regulation. The following workplaces are covered by the rule:

When Must Covered Establishments Submit 300A Data?

California imposed a “catch-up” provision to collect FY2017 300A data even though the rule was adopted after federal OSHA’s deadline for 2017 data. Specifically, covered establishments in California were required to submit FY2017 300A data by December 31, 2018. Covered establishments also have a short turnaround time to submit FY2018 300A by March 2, 2019.

In other injury and illness recordkeeping news, AB 2334 goes even one step further by resurrecting a former controversial Obama-era safety and health rule. Notably, the bill includes a provision that impacts the statute of limitations for issuing recordkeeping citations. Despite the Cal/OSHA Appeals Board decision in Key Energy Services (DAR-15-0255-0256), which held that Cal/OSHA cannot cite employers for failing to record injuries and illness if the violation took place more than six months before the citation was issued, AB 2334 seeks to establish recordkeeping violations as continuing violations, so as to expand the statute of limitations for such violations for the entire five-year period the record must be kept.

Now California has passed AB 1565 to clarify that in order for a direct contractor to withhold disputed sums, the contractor must specify in the contract with the subcontractor the documents and information that must be provided. The bill took effect on September 19, 2018.

SB 1402 extends liability to customers of any port drayage motor carrier (those transporting cargo or equipment to or from a port in California) for labor law violations of the carrier employer. The bill, which adds section 2810.4 to the Labor Code, applies to customers with 25 or more employees and includes customers that directly or indirectly engage a carrier. There is an exception for customers that hire a motor carrier whose employees are covered by a bona fide collective bargaining agreement meeting certain requirements.

Under this new law, the Division of Labor Standards Enforcement (DLSE) is responsible for posting a list on its website of port drayage motor carriers with any unsatisfied final court judgment, tax assessment, or tax lien. Once a motor carrier appears on the list, a customer of that carrier will share all civil legal responsibility and civil liability for services obtained after that date. This means the customer will be jointly and severally liable with the carrier for future labor law violations. While the carrier is subject to notice requirements, a carrier’s failure to provide notice is not a defense to a customer’s liability.

AB 1976 expands existing requirements for employers to accommodate an employee desiring to express breast milk for the employee’s infant child. Employers are now required to make reasonable efforts to provide an employee with use of a room or location (other than a bathroom), in close proximity to the employee’s work area, for the employee to express milk in private. There are additional provisions for temporary lactation locations, for agricultural employers, and for employers who can demonstrate the general requirement would impose an undue hardship.

SB 785 expands the limits on admissibility of a person’s immigration status. Specifically, the bill prohibits the disclosure of a person’s immigration status in open court by a party unless that party requests an in camera hearing and the presiding judge determines that the evidence is admissible. The bill went into effect on May 17, 2018 and remains in effect until January 1, 2022.

Prohibition Against Discrimination of Members of Military to Include the Reserves

SB 1500 expands existing prohibitions of discrimination against members of the military or naval forces. Existing law prohibits discrimination in employment by virtue of being a member of the military or naval forces, performing ordered military duty or training, or accepting a warrant or commission for service. In addition, members cannot be refused entrance to public entertainment, places of amusement, and other specified business establishments because they wear their organization’s uniform. Specifically, SB 1500 amends Military and Veterans Code section 394 to extend such protections to members of the federal reserve components of the Armed Forces of the United States and members of the State Military Reserve.

More on the Equal Pay Front

This bill confirms that employers are not prohibited from asking applicants for employment their salary expectations. This bill also clarifies that employers need only provide pay scales to applicants, upon their request, who have completed at least one interview, and that for this purpose pay scale means “a salary or hourly wage range.”

New Exceptions to Wage and Hour Requirements for the Petroleum, Motor Carrier and Construction Industries

Exception from Rest Break Requirements for the Petroleum Industry

AB 2605 creates a temporary exception from rest breaks required under Industrial Welfare Commission Wage Order 1, regulating the manufacturing industry, for certain employees in safety-sensitive positions at petroleum facilities. The Wage Order, as construed by Augustus v. ABM Security Services, 2 Cal. 5th 257 (2016), requires nonexempt employees to be relieved of all duties during rest periods, including the duty to remain on call or carry radios or other forms of instant communication.

Under this new law, employees holding safety-sensitive positions (as defined) at a petroleum facility need not be relieved of all duties during rest periods, to the extent they are required to carry and monitor a communication device, such as a radio or pager; respond to emergencies; or remain on the premises to monitor the premises and respond to emergencies. Such employees would still be owed a make-up rest period reasonably promptly after the circumstances that led to the interruption have passed or, if circumstances do not allow such make-up period, one additional hour of pay at the employee’s regular rate of pay for any rest break which was interrupted or which the employee was forced to miss.

This law only applies to employees covered by a valid collective bargaining agreement where the agreement expressly meets certain requirements. The bill went into effect on September 20, 2018 and remains in effect until January 1, 2021.

AB 2610 allows a commercial driver employed by a motor carrier transporting nutrients and byproducts from a licensed commercial feed manufacturer to a customer located in a remote rural location to commence a meal period after 6 hours of work, rather than after 5 hours. For this exception to apply, the regular rate of the driver must be no less than one and one-half times the state minimum wage and the driver must receive overtime compensation.

Temporary Carve-out from PAGA Liability for the Construction Industry

AB 1654 creates a temporary carve-out from the Labor Code Private Attorneys General Act (PAGA) actions for employees working in the construction industry under a valid collective bargaining agreement in effect any time before January 1, 2025. The collective bargaining agreement must meet certain requirements and contain specific provisions, including grievance and binding arbitration procedures to redress violations. This law remains in effect until January 1, 2028. 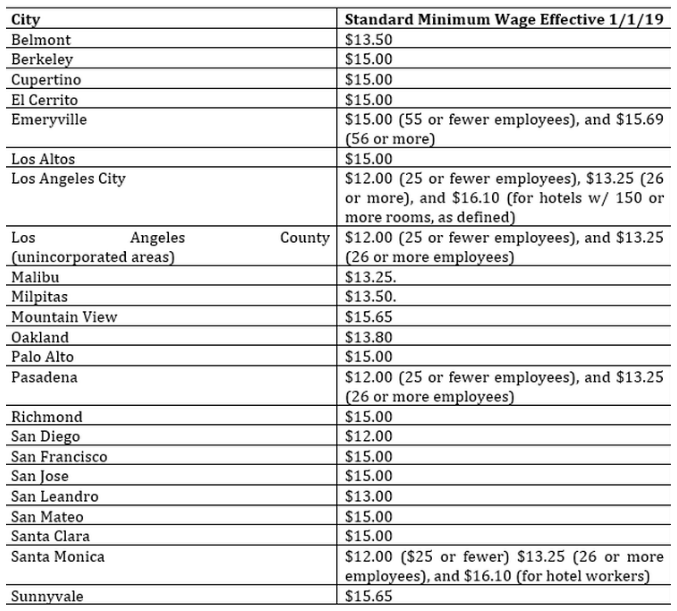 As a result of these legislative developments, we recommend that California employers take the following steps: