Resort Fees are a $2.7 billion issue — a juicy target for Federal and State governments as well as plaintiffs’ lawyers

It is very likely that the Resort Fee issue will present challenges in the near future to all stakeholders in the hospitality industry. The prior articles in this series talked about what Resort Fees are, and key developments that warn of an eruption of government and private claims over Resort Fees.

This article provides a brief history of how Resort Fees have grown to be a $2.7 billion a year issue in an emotionally charged dispute between antagonists. We think this background is important for the correct analysis of problems and solutions involved with Resort Fees.

The emergence of Resort Fees and the government’s failure to take action for many years has apparently led to a dangerous misconception, at least in light of fast-unfolding events. This misconception is that it is OK to advertise room rates (without the Resort Fee) on your website, as long as the Resort Fee is disclosed somewhere — in the fine print or otherwise — before the consumer books the purchase. Some would argue that this was never OK, but recent developments make this a perilous position. This is not OK according to the FTC 2017 Report and other consumer groups. (see the previous article regarding the eruption of government and private claims over Resort Fees)

Hotels have charged various service fees for decades. We found references to Resort Fees in 1997. In 2001, a class action lawsuit was filed against Hilton, Hyatt, and Starwood for imposing mandatory “energy surcharges” to guest bills. In 2006, Wyndham settled an action by the Florida Attorney General over undisclosed automatic surcharges under investigation since 2001. In 2012, the FTC took a series of actions described below in response to consumer complaints of mandatory fees and drip pricing.

On November 28, 2012, the FTC published a press release about a formal warning it had issued to 22 hotel operators notifying them that their pricing may violate section 5 of the FTC Act as fraudulent, deceptive and misleading business practices. The warning letter noted that price quotes for room rates without mandatory fees sometimes had footnotes or separate disclosure of the additional fees, but suggested that this treatment might be inadequate. The letter said, “These practices may violate the law by misrepresenting the price consumers can expect to pay for their hotel rooms.”

Back to unsettled rumblings.

After the FTC actions in 2012, many expected either major litigation or a sea change in the way mandatory fees were handled at hotels. But neither of these events happened.

In the ensuing years, many stakeholders in the hotel industry worked on this issue. Hotel industry leaders thought they had developed an appropriate set of disclosures and presentation for the information to consumers. Many believed that the failure of the FTC to take further action was tacit approval of the procedures adopted by the hotel industry for greater disclosure.

Comfort in the FTC’s inaction may have been transitory.

In any event, mandatory service charges have grown every year since 2009. More hotels are adopting them and those with fees already are increasing the amount of the fees. Consumer complaints have grown. Consumer-oriented trade groups like Travelers United have generated a lot of publicity, encouraged FTC action, pressed for state attorneys general to act and even encouraged legislation to prohibit the drip pricing approach.

The size of the cauldron grows.

Although data is somewhat limited, here are some key figures:

For several years since 2009, mandatory service charges have run about $1 billion per year. They have increased every year, particularly the last few years as shown below. 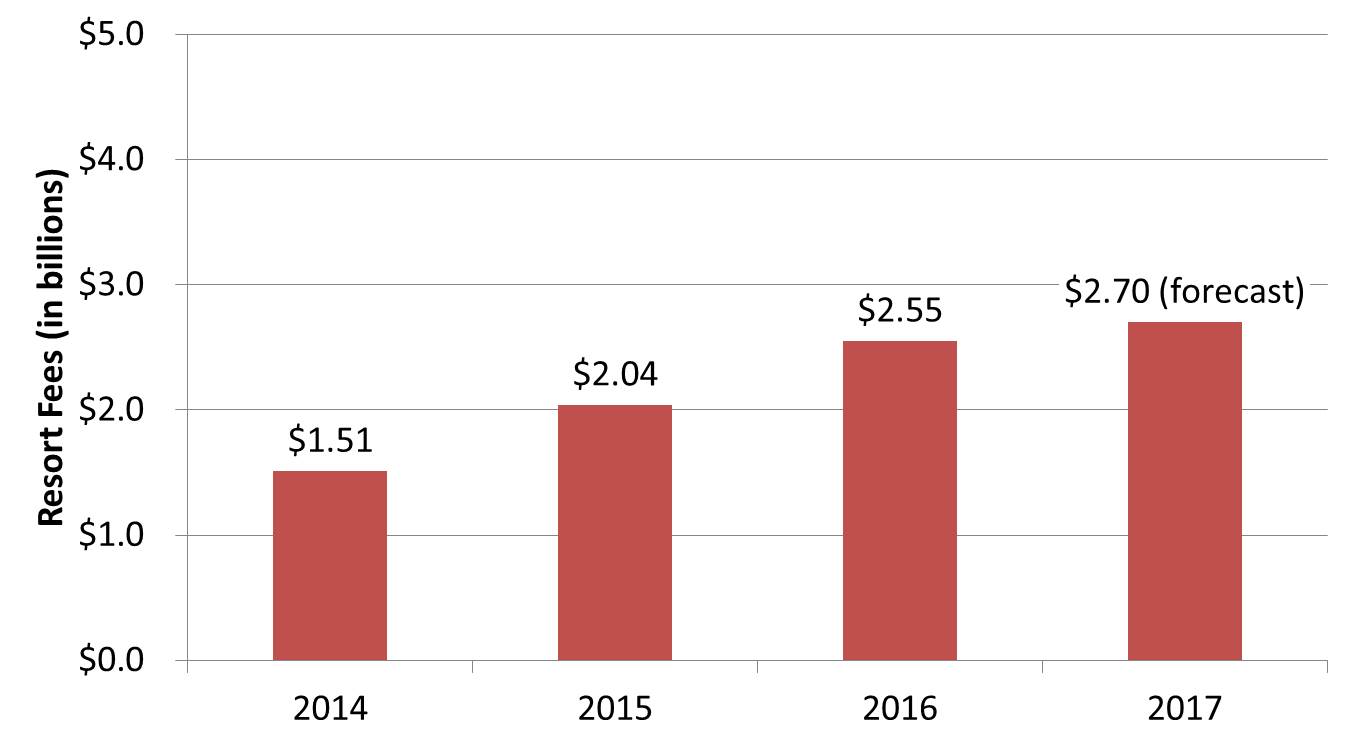 A decade ago, only a few hotels charged the fees. They were generally in resort destination locations such as Florida, California, Hawaii and Las Vegas. According to Travelers United, in 2016 there were 1,671 hotels which charged Resort Fees but did not include them in online advertised rates. In any event, the number of hotels charging such fees has continued to expand, including many urban hotels.

In 2016, in part responding to consumer pressure from a coalition of the National Consumers League and Travelers United (the “Coalition”), Senator Clarie McCaskill (D.-Mo.) introduced the Truth in Hotel Advertising Act of 2016, which would prohibit hotels from advertising a room that doesn’t include all mandatory fees.

The Coalition then targeted state governments, making a pitch to state attorneys general that Resort Fees deceive customers and put honest competitors at a disadvantage. In 2016 this led to the commencement of a major investigation into Resort Fees by a task force of state attorneys general from 46 states and the District of Columbia, who are now actively involved in investigation, litigation and enforcement. (See National task force of 47 Attorneys General goes after hotel Resort Fees)

In mid-2017, the Attorney General for the District of Columbia filed an action against Marriott International to enforce subpoenas related to its investigation. And we are now aware that a number of owners, operators, and brands are receiving subpoenas or inquiries from other State Attorneys General relating to this task force’s nationwide investigation.

Apparently, this continuing consumer pressure also caused the FTC to take a much more aggressive position on Resort Fees than its initial action in 2012. (See The FTC takes aim at hotel Resort Fees — The FTC 2017 Report)

A new level of disclosure is required to avoid major problems.

All of these developments show that appropriate disclosure is the paramount concern, and the failure to satisfy that concern will be a problem. It would appear, then, that the safest course of action would simply be for a hotel to include Resort Fees in its room rates. But this safe course will likely have other unintended economic consequences on the various players in the Hotel Industry which will be discussed in another article.