In this update, we consider certain key statistics, trends, developments and highlights regarding U.K. public M&A transactions governed by the U.K. City Code on Takeovers and Mergers (the Takeover Code) that were announced during the second half of 2020. For a review of the first half of 2020, see our client alert “UK Public M&A Update — H1 2020.”

Implementing an offer by means of a scheme of arrangement remained the most popular offer structure throughout 2020. Schemes accounted for 67.9% of firm offers announced in H2 2020, representing a decrease from 84.6% in H1 2020, but broadly similar to the average for 2019.

H2 2020 was dominated by high-value deals, with over 60% of firm offers valued above £500 million and more than 30% of deals valued above £1 billion. This reverses the trend since H1 2019 of a gradual decline in the number of deals being made with valuations of more than £250 million. As a point of reference for the success of H2 2020:

Also noteworthy is that average deal valuations rose dramatically towards the end of H2 2020, with six deals in December 2020 alone that had an average deal value of approximately £1.37 billion. 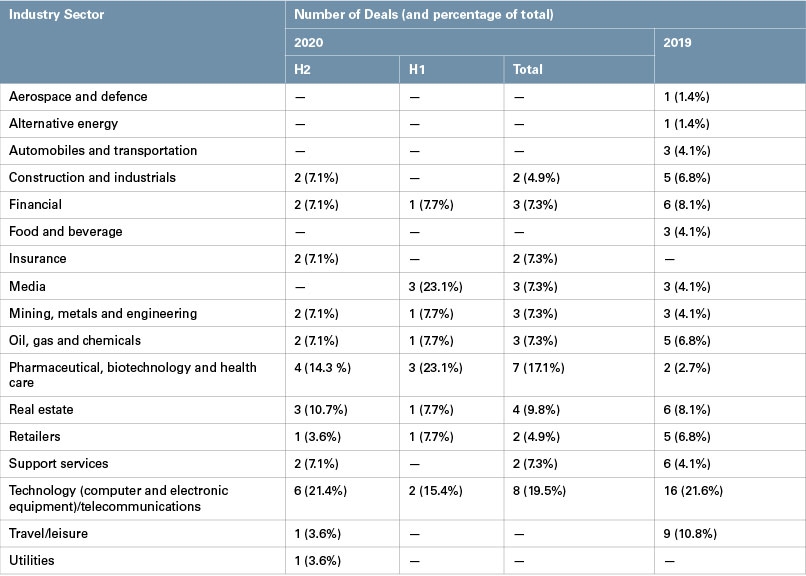 The upward drive in deal volumes and values in H2 2020 highlights a changing emphasis on the industries in which deals were and are being sought and made. The contrast between deal statistics in the pre-COVID-19 environment in 2019 and the post-COVID environment in H2 2020 demonstrates the pandemic’s impact on activity in specific industry sectors, in some cases including a rapid decline. In 2019, deal activity across (i) automobiles and transportation, (ii) food and beverage and (iii) travel/leisure sectors accounted for 21.6% of total U.K. public M&A activity. Each of these industries faced (and continue to face) notable and sustained constraints on their businesses as a direct consequence of U.K. and international restrictions in 2020. In what appears to be a consequence of these constraints, in H2 2020, these three sectors accounted for only 3.6% of all firm offers announced. In contrast, the insurance industry saw two separate deals (accounting for 7.1% of total deal activity) in H2 2020, with a combined deal value of around £8.86 billion, as compared to no deals in 2019 or H1 2020.

Public-to-private transactions (P2Ps), whereby a listed target is acquired by an unlisted bidder, remained constant over 2020, with P2Ps accounting for approximately 46% of firm offers announced in both H2 2020 and H1 2020, representing a slight annual increase as compared to the 43.2% of firm offers that P2Ps represented in 2019.

Can This Momentum Sustain Itself?

The onset of the COVID-19 pandemic induced a rapid and unexpected drop in U.K. markets in the first half of 2020. The significant rise in both the number and value of U.K. public deals at the tail end of 2020 was almost as fast and unprecedented. We expect that the trends that emerged in H2 2020 will likely continue, given that the same circumstances arising from the U.K. and international response to COVID-19, which offer opportunities to some and obstacles to others, seem set to continue in the near term and midterm despite the commencement of large-scale vaccination.

The dramatic changes to everyday life caused by COVID-19 separately appear to have acted as a catalyst for the rise in importance and, as a result, value of technology companies. Many hope that a post-Brexit U.K. will continue to generate domestic technology firms and attract international ones. Potential revisions to the U.K. listing rules following the review of the U.K. listings regime by Her Majesty’s Treasury to encourage more high-growth, founder-led and technology companies to list in London as opposed to overseas would support this trend. As a result, the momentum in the U.K.’s public M&A market may continue to build.

Key Developments and Highlights in H2 2020

Proposed Changes to the Takeover Code

On 27 October 2020, the U.K. Takeover Panel published a consultation paper setting out a number of significant proposed changes to the Takeover Code.

The most notable proposed changes relate to the timetable for an offer and to regulatory conditions. Currently, in relation to U.K. and European Commission antitrust conditions, the Takeover Panel can suspend the timing restrictions under which certain requirements of an offer need to be fulfilled. These recent proposals would extend this ability to impose a suspension to all conditions relating to official authorisations and regulatory clearances. The proposals also provide that the invocation of all regulatory conditions be subject to the same materiality test.

In effect, these changes would require that bidders treat all official authorisations or regulatory clearances consistently across non-EU and EU regulators. This would remove the historical anomaly by which antitrust conditions and pre-conditions relating to the U.K. and the European Commission are afforded special status, and are easier to invoke. As the post-Brexit regulatory environment becomes more defined in the coming months, the decision to remove this historic anomaly may seem self-evident. Nevertheless, this parity breaks from decades of tradition and has been achieved only after a significant pre-consultation process by the Takeover Panel.

The Takeover Panel expects to publish a response to its paper in spring 2021, and has stated that any changes to the Takeover Code would be formally adopted three months after this response.

For more discussion on the changes proposed by the Takeover Panel, see our 29 October 2020 client alert “UK Takeover Panel Proposes Significant Changes to the Offer Timetable and the Treatment of Conditions.”

The Growing Influence of Private Equity

At the onset of COVID-19 in 2020, and even prior to the disruption to the U.K. public M&A market that quickly followed, private equity (PE) sponsors were widely noted to be sitting on record-high levels of dry powder.

Many commentators were surprised that these funds were not immediately deployed in response to significant drops in share prices across a number of major industries and to the desperate need of many pandemic-affected public companies for immediately available capital. PE funds were instead primarily focussed on their portfolio companies throughout H1 2020, and remained relatively risk-averse with respect to new investments amid fears regarding market volatility, inadequate pricing mechanisms and conviction in valuations in the face of unprecedented global market disruption.

Towards the end of 2020, however, private equity investors started to look beyond their portfolio companies and seek opportunities to deploy their reserve funds in the U.K. market. By year-end, 53% of the firm offers announced during 2020 (as compared to 49% in 2019) were either made by private equity firms or backed by other funds and investment companies. Many of these offers were high-value deals, with a total of nine having value over £500 million and six valued in excess of £1 billion.

At the end of 2020, U.S. private equity sponsors still held around US$1.7 trillion in undeployed funds. As U.K. companies remain impacted by U.K. and global restrictions (and share prices remain low but less volatile, particularly as a result of greater certainty and political stability following Brexit), prospective PE bidders may become even more proactive in seeking opportunities to invest in the U.K. market and what are perceived to be undervalued U.K. companies.

The bill introduces a requirement to notify certain transactions involving targets active in 17 specified core sectors most likely to raise national security concerns (such as defence, critical infrastructure and certain technology sectors). This marks a significant change from what has to date been a voluntary regime in the U.K. for merger control or public interest review. Additionally, transactions in sectors not requiring mandatory notification may be notified on a voluntary basis or “called in” by the U.K. government for review. The U.K. government will have wide-ranging powers to impose conditions or block deals. Further, deals that are not notified and approved under the mandatory regime would be void.

The U.K. government anticipates 1,000-1,830 notifications per year, which may prove an underestimate considering the broad scope of the new bill. The bill captures a wide range of transactions, including minority share acquisitions and asset acquisitions, regardless of the nationality of the purchaser. Given the retrospective application of the rules (which would apply to any transactions taking place since 12 November 2020) and the expected introduction of the mandatory filing regime later this year when the bill takes effect, the new regime will be an important consideration for U.K. public M&A in 2021.