After the close of the second quarter of 2020, we took a dive into the worldwide data tracking issuance of Augmented Reality/Virtual Reality patents. Augmented Reality/Virtual Reality (“AR/VR”) refers generally to a class of technologies that merge a view of a real-world environment with virtual objects and information or provide an entirely virtual environment as a user experience. AR/VR technologies are drawing renewed attention due in part to availability of cheaper and powerful mobile computing devices, faster and ubiquitous communication networks, plus the increased need for means of remote communication and collaboration in this work from home era. No longer are AR and VR restricted to entertainment and science fiction; they have now expanded into online shopping, workplace training and collaboration, healthcare delivery, and the real estate market, just to name a few. In this series, we track the growth in AR/VR patents worldwide that we expect will accompany the rapid innovation in this technology space. We highlight trends in patenting AR/VR technologies—who is obtaining AR/VR patent protection, and where. We track the various technology centers at the United States Patent and Trademark Office that handle AR/VR applications. And, from time to time, we shine the spotlight on interesting new AR/VR patents.

In the second quarter of 2020, over 4000 patents issued around the world related to AR/VR technologies, a significant jump up from the 2500 that issued in the first quarter of 2020. The United States and China continue to lead the way, with the USPTO issuing over 1200 patents (200 more than Q1) and the Chinese patent office issuing about 300 more relevant patents than the previous quarter. Some countries issuing increased amounts of relevant patents include Italy (113), France (120), and Scandinavian countries such as Norway (114) and Finland (114). There were also notable declines in the number of issued AR/VR patents from the Japanese and European Patent Offices, perhaps attributable to shutdowns related to the COVID-19 pandemic.

Microsoft remained the top assignee in Q2 2020, adding 58 new AR/VR patents to its collection. Sony Corporation saw a surge in issued patents, acquiring 52 in Q2 after only 35 in Q1. The rest of the top ten remains familiar, except for newcomer Qualcomm Inc., which is presumably boosting its AR/VR development in step with the rollout of 5G. 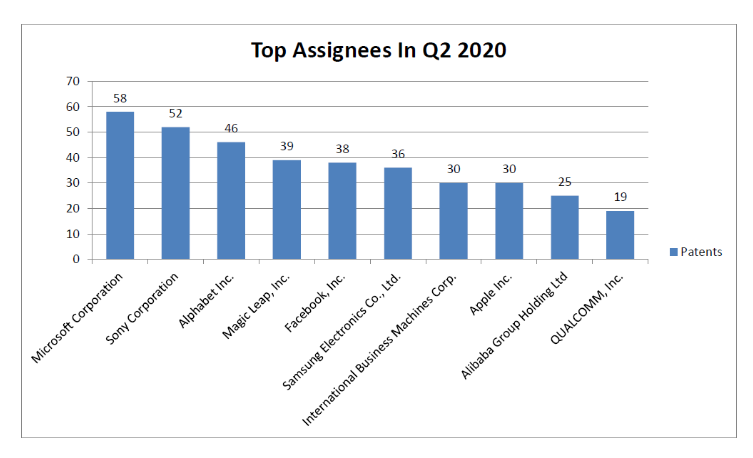 One example of a Q2 2020-issued AR/VR patent is U.S. Patent No. 10,621,784 assigned to Sony. This utility patent covers venue mapping for virtual reality spectating of live events. The technology can be used to improve the experience for VR attendees at live events by stitching together video and audio feeds to provide a seat-based experience of the event. The patent even discusses ways for VR attendees to interact with live attendees in the “seat” next to them.

This quarter, we take a peek inside Technology Center 2100 of the United States Patent and Trademark Office (“USPTO”), to which a large portion of AR/VR applications filed at the USPTO are assigned. Tech Center 2100 handles applications directed to computer architecture and software generally, including graphical user interface processing, computer architecture and inputs and outputs, and artificial intelligence and simulation modeling. During the second quarter of 2020, Tech Center 2100 had an allowance rate of 88.9%. Most applications, just over 85%, had previously faced rejections based on prior art under 35 U.S.C. §§ 102 or 103. However, of all applications issued in Q2, only 41% issued without filing at least one Request for Continued Examination. While rejections under 35 U.S.C. § 101 were inflicted upon 26% of applications in the first office action, they dropped below 16% in final office actions. Any and all rejections were eventually overcome by the more than 4500 patents issued from Tech Center 2100 this quarter. Average pendency for patents issuing from Tech Center 2100 is 2 years, 9 months, and 28 days from filing to issuance. Finally, appealing a Final Office Action to the Patent Trial and Appeal Board saw a 71% chance of a positive outcome for applicants.

Design patent protection is available in the U.S. and Canada to protect the ornamental design of an object. (Europe and other jurisdictions operate on a registration system, rather than an examination system.) Companies and inventors may choose to protect hardware or graphical user interface elements using design patents. In the second quarter of 2020, a smattering of companies secured design patent protection for their products. Magic Leap was back to scoop up 3 more design patents. Among others, Samsung and Korea-based mobile phone accessory company Spigen Korea each procured 2 design patents related to AR/VR technologies.

While the statistics are at the mercy of the global pandemic, Q2 2020 still shows that companies see value in obtaining patent protection for their innovations in the AR/VR technology space. With continued advances in software and hardware innovations, plus an increased interest in using AR/VR to collaborate and work remotely, inventors and practitioners would do well to track innovations in the space and keep an eye on consumer demands, to focus their intellectual property strategies, keeping their intellectual property protected and relevant.

Our analysis includes a search of all patents granted around the world in the second quarter of 2020, from April 1 to June 30, for keywords in the title, abstract, or claims related to AR/VR technologies. We then review the data to determine which offices are issuing relevant patents and which companies are focusing on protecting their innovations in the different parts of the world. For design patents, the same search was run however, we note that the search was limited to the United States and Canada as design protection differs worldwide.