On 10 November, the Anti-Monopoly Bureau of the State Administration for Market Regulation (“SAMR”) issued the Antitrust Guidelines for the Platform Economic Industry (draft for comments) (“Platform Guidelines”). [1] The release of these important guidelines at the time of 11 November[2] signals that SAMR will continue to strengthen its antitrust enforcement in the Internet platform sector.

The Platform Guidelines consists of six Chapter with 24 articles, and it was drafted under the basic system and analytical framework of the Anti-monopoly Law (“AML”).[3] The Platform Guidelines takes into account the characteristics of the platform/Internet economy and gives specified guidance regarding monopoly agreement, abuse of dominance, concentration of undertakings and other areas of concern in the context of platform/Internet economy. The following three points are particularly noteworthy:

The issuance of the Platform Guidelines will undoubtedly provide better guidance for antitrust enforcement in the platform economy and provide guidance for companies to observe. In this article, we highlight ten noteworthy areas of the guidelines.

Highlights 1. Clarifying the method for relevant market definition in light of the characteristics of the platform economy

The Platform Guidelines[4] first clarifies the characteristics of the platform economy, namely the involvement of multiple parties, the complexity of business types and the dynamic competition. When defining a relevant product market, demand-side substitutability analysis shall be conducted on the basis of factors such as the platform functions, business model, user groups, multilateral markets and offline transactions. Supply-side substitutability analysis shall consider factors such as market entry, technical barriers, network effects and cross-sector competition. For the relevant geographic market, it is generally defined as the Chinese market or regional market considering the characteristic of the platform, while in some particular cases, global market may be defined.

It is noteworthy that the Platform Guidelines provides that competition among competitors usually revolves around their core business in order to gain broad and sustained attention from users. Therefore, the relevant market definition cannot be simply based on the platform’s underlying service, but also needs to consider the possible cross-platform network effects in order to define the platform as a distinct market or as multiple connected markets.

The Platform Guidelines clarifies the role of relevant market definition in the enforcement for the platform economy, and it particularly points out that under certain circumstances where it is difficult to accurately define the relevant market, anti-competitive conduct can be directly identified without defining the relevant market. In fact, it breaks through the traditional pattern of “relevant market definition – market dominance identification – abuse identification” in the case of abuse of dominance, and it addresses and solves the difficulty of identifying obvious abuse of dominance based on the traditional pattern.[5] 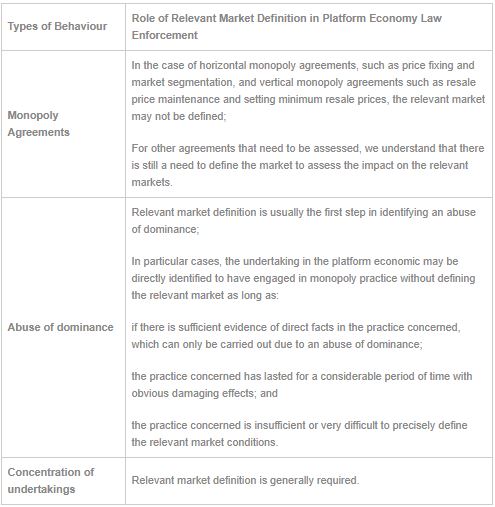 Highlights 2. Listing explicitly algorithm conspiracy as a new form of a monopoly agreement

Highlights 3. MFN clauses may be challenged as vertical monopoly agreements

As the goods and services increasingly shift from traditional offline sales to online platform sales, the most favoured nation clauses (“MFN Clauses”) have once again come to the attention of antitrust enforcement authorities of various countries. The Platform Guidelines specifies that a MFN clause may be challenged as a vertical monopoly agreement and further clarifies the factors to be considered, including the undertakings’ commercial motivation for entering into the clause, their ability to control the market, and the impact of the implementation of such clause on market competition, consumers’ welfare and innovation.[8]

In past enforcement cases, the Shanghai Administration for Market Regulation has held that agreements containing the MFN clause conditioned on minimum purchase quantity may constitute an abuse of dominance of exclusive dealing.[9] Therefore, undertakings shall prudently assess the MFN clauses and analyse the legal risks thereof both from the perspectives of vertical monopoly agreements and abuse of dominance. At the same time, the risk of hub-and-spoke agreements should be also considered if MFN clauses result in the effect of horizontal price fixing.

Highlights 4. Including hub-and-spoke agreement into the scope of regulation.

Highlights 5. Identifying the dominant position based on the characteristics of platform economy

The identification of dominance is usually the starting point and the difficult point in determining the abuse of dominance. In the Interim Provisions on Prohibiting Abuse of Market Dominant Position, SAMR puts forward additional factors to be considered in determining dominant position of undertakings in the new economy such as the Internet industry.[11] On the above basis and in light of the characteristics of the platform economy, the Platform Guidelines refined the additional factors to be considered: 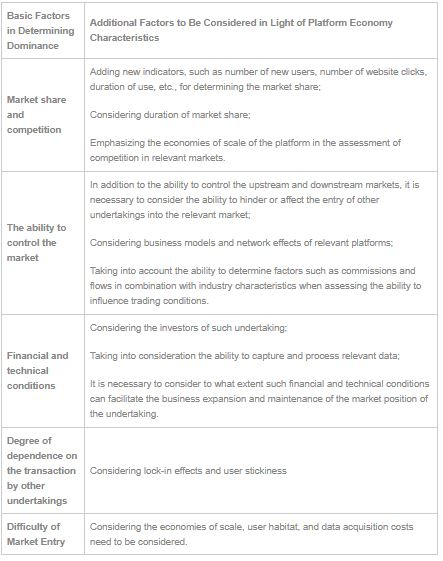 Highlights 6. Further refining the rules on refusal to deal

The Platform Guidelines provides more detailed guidance on the rules related to refusal to deal, which used to be one of the major difficulties in identifying abuse in practice.

Secondly, the Platform Guidelines details the factors to be considered when determining whether the relevant platform or data constitutes an essential facility: 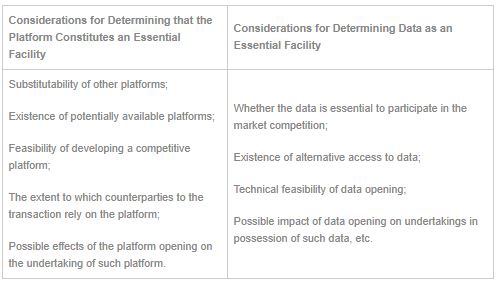 Furthermore, considering the industry characteristics, “the counterparties has expressly indicated or actually failed to comply with the fair, reasonable and non-discriminatory platform rules” is added to the justified reasons for refusal to deal.

Highlights 7. Regulating the issues concerning exclusive dealing such as “Either-or-Choice”

The Platform Guidelines explicitly lists the practice of requiring a counterparty to the transaction to choose between two competitive platforms as a type of exclusive dealing.

The Platform Guidelines puts forward two circumstances to be taken into account in determining whether a transaction constitutes an exclusive dealing. First, where a platform undertaking imposes restrictions by taking punitive measures, such as searching downgrade, traffic restrictions, technical barriers and deduction of deposits, which causes direct damage, such practice shall be generally deemed as exclusive dealing. Second, restrictions imposed by a platform undertaking by taking incentive measures, such as subsidies, discounts, preferences and traffic resource support, may have certain positive effects on undertakings using the platform, consumers’ welfare and the overall social benefits, may also be deemed as exclusive dealing if it clearly eliminates or restricts market competition.

At the same time, the Platform Guidelines notes, inter alia, that the maintenance of the platform’s reasonable business model may also be a justification for exclusive dealing.[13]

Regarding the practice of “Either-or-Choice”, the Platform Guidelines also points out that the exclusive agreements between platform undertakings and transaction counterparties may constitute other vertical monopoly agreements subject to the AML.[14]

Highlights 9. Interpreting the notification threshold of concentration of undertakings for the platform economy business model

The Platform Guidelines takes into account the differences in business models between the platform economy and the traditional economy, which may result in a difference in the calculation of turnover. In this regard, the Platform Guidelines provide that, for platform undertakings that only provide information matching and commissions receiving, the turnover may be calculated based on the service fees and other income received by the platform. For platform undertakings that compete in the market competition on the platform side, the turnover may be calculated based on the value of the transaction the platform engaged in and other income of the platform.[16]

In addition, due to the special nature of the platform economy business model, there may be a case where the turnover is so low that it is not possible to meet the threshold of concentration of undertakings notification, while such a concentration will have a clear eliminating or restrictive effect on competition in the relevant market. In particular, the Platform Guidelines[17] points out that where the undertakings participating in the concentration is a start-up or an emerging platform, or the undertaking concerned has a relatively low turnover as a result of its adoption of the free-of-charge or low-price mode, and under such circumstances, although the concentration does not reach the threshold for notification, antitrust enforcement authorities may still launch investigation in accordance with the law if such concentration has or is likely to have effects of eliminating or restricting competition.

The Platform Guidelines clarifies this issue and clearly points out that the concentration of undertakings involving the VIE structure falls within the scope of the merger control review.[20] In light of this, an undertaking shall prudently assess whether its transactions involving VIE structure may trigger a notification obligation.