On a recent series of flights, I watched “Valley of the Boom,” an unconventional but highly- entertaining miniseries focusing on all of the shenanigans that accompanied the early 1990’s Silicon Valley technology boom and bust. It was a time when the public and investors alike were fascinated by the bright shiny new ideas of online interaction and retail, and a time when a few kids with a web address but no workable business plan could become overnight millionaires. For awhile there, we acted as though someone simply lacking the business fundamentals could instead be “rewriting the rules.”

Then came the bust, of course, and that degree of techno-optimism is likely in the past. But just in the last few years, there has been another “market correction” as it applies to public attitudes toward technology companies. According to a report this past summer from the Pew Research Center, there has been a sudden and steep decline in trust. In just the past three years, since 2015, the proportion of those saying that technology companies have a positive effect on the country has plunged by almost a third, while the proportion saying that the effect is negative has doubled. This matters in the civil litigation courtroom since companies in the technology sector often find themselves in commercial, products, employment, and especially IP litigation. With the technology sector still growing in size, this public disaffection deserves some scrutiny. In this post, I will take a look at the poll, share thoughts on the possible reasons for decline, and consider a few implications for tech companies in litigation.

The Poll: Sudden Downtime for the Tech Sector 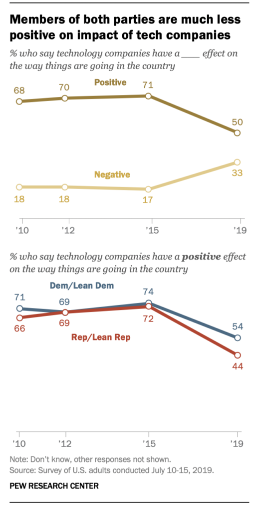 Part of the decline could be attributed to a loss in faith in institutions generally, that the Pew report and a number of other observers have documented. But still, the shift has been more sudden than it has been with other institutions like higher education, the church, and the news media. It is likely that technology users are starting to become more clear-eyed about its flaws: e.g., FaceBook is becoming an addiction, Twitter is becoming an attack dog, and all of it is becoming a huge intrusion on privacy. Because the declines coincides with the last presidential campaign and election, it is also likely that there are perceptions of political bias and favoritism on both sides, but stronger among conservatives. Then there is also Cambridge Analytica and the notion that the combination of technology, targeting and omnipresent “fake news” has changed our politics and society forever.

So if you are representing a company involved in technology, how might you respond to the public’s waning love affair with technology companies?

One way is to redefine what the company does. Remember that technology is a means to an end, so no company is really a “tech company,” but is rather a company that is about the function being served or the service being provided. So you’ve got a communications company, an efficiency company, an entertainment company, maybe a social-networking company, but not a “tech company.”

One thing we’ve observed lately, is that when the company’s name is known, then the specific reactions to that company are going to matter more than reaction to “companies” or “tech companies” generally. So, like political candidates, it helps to keep track of your individual approval and disapproval ratings. Do your surveys, conduct your focus groups, and use a questionnaire in voir dire to find out about your potential jurors.

Finally, encourage fact-finders to think of your client, not as an abstract entity, but as people. The more they think of the conflict in general terms, the more their attitudes about the company or the field will matter. But the more they get into the details of your story, the more you will want a prepared and personable company witness to carry that message.