As a follow up to the amendment of Law No. 25 of 2007 on Investment (“Investment Law”) under the Omnibus Law, the government recently issued the draft new negative list as the implementing regulation to be applied for foreign investment in Indonesia. Negative list is a list of shareholding requirements and restrictions for all business activities in Indonesia. The latest negative list isregulated under the Presidential Regulation No. 44 of 2016 on List of Business Fields that are Closed to and Business Fields that are Open with Conditions to Investment (“NegativeList”).

One of the most significant amendment of the Investment Law is of Article 12 that sets the basis for the issuance of the Negative List. We set out below the provision of Article 12 before and after the amendment: 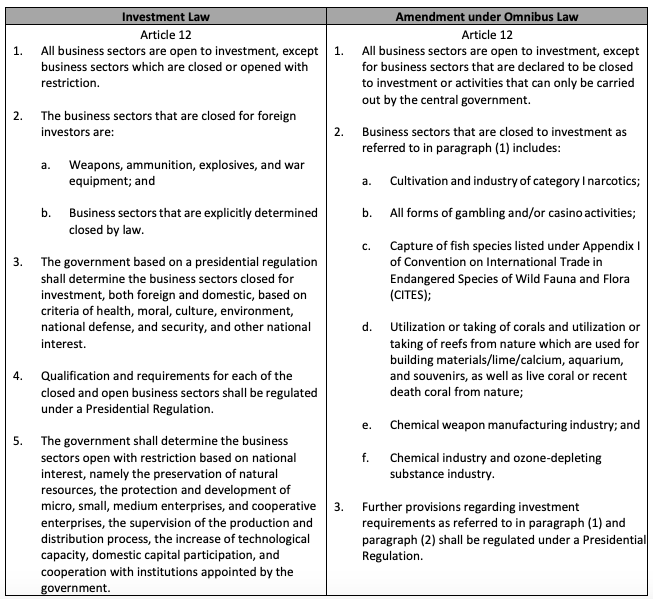 Seeing the amendment of this Article 12 especially in paragraph (1), the first impression isthat the government will open all businesses for foreign investment, except for the closed business as stated in paragraph (2) and activities that can only be conducted by central government. Therefore, the Negative List will be abolished. The government, however, provides further explanation on the definition on “business sectors that are opened for investment” in this draft new negative list. We have prepared a brief summary on the content of draft new negative list below.

Definition of “business sectors that are open for investment”

The draft new negative list regulates that business sectors that are open for investment consists of:

b. Businesses that are specifically designated for SMEs or must be conducted through a partnership with SMEs;

d. Business fields that are not included in (a), (b) and (c) above. These businesses can be carried out by all investors.

Based on the above definition, it appears that the government still envisages foreign ownership restriction for certain line of businesses. However, based on our review of the draft new negative list, most of line of businesses that are restricted for foreign investment under the current Negative List are now fully opened for foreign investment, and only few businesses are still subject to certain foreign ownership limitation. It should be noted that for businessesin financial sector under the supervision of Bank Indonesia and/or Indonesian Financial Service Authority (OJK), such as banks, financing companies, insurance, etc., the draft new negative list stipulates that the foreign ownership restriction will be as set out in the relevant regulations in the financial sector.

Based on the draft new negative list, most businesses that are currently restricted for foreign investment under the Negative List have been removed, which means they are open for 100% foreign ownership. The following are the line of businesses that are very common for investors: 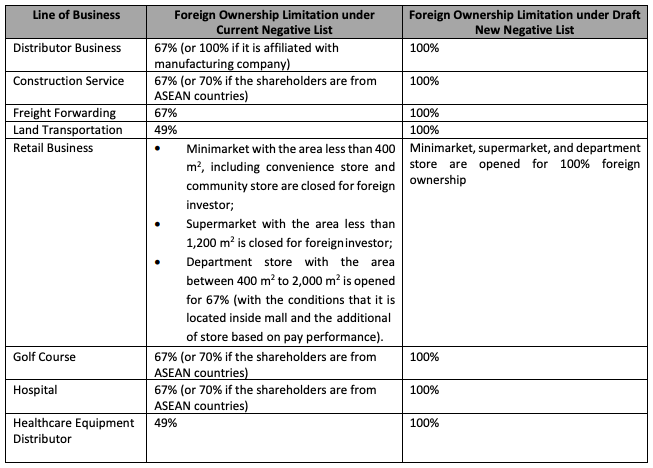 Several line of businesses that are subject to foreign investment restriction

Our analysis of the restriction on these businesses is because the limitation for foreign ownership has been specifically regulated in the relevant sectoral regulation, for example: the limitation of foreign ownership has been regulated under Law No. 38 of 2009 on Postal Service pursuant to which the Indonesian party shall have majority shares in a foreign direct investment company engaged in postal service, the limitation in sea transportation and ferry service are the mandate of Law No. 17 of 2008 on Shipping to implement the cabotage principle, and the limitation in broadcasting sector is also regulated under Law No. 32 of 2002 on Broadcasting. Based on this limitation, we are of the view that the government wishesto harmonize the negative list and sectoralregulationsso thatthey are not contradicting one another.

In addition to these business, the draft newnegative list also stipulatesseveral businessesthat are specifically designated for SMEs, most of which are traditional businesses or activities which do not require technology or use intensive labor or capital.

Although the new negative list is still in a draft form, it gives the impression that the government of Indonesia is now trying to open the market to foreign investors by allowing them to have 100% ownership in various businesses and therefore foreign investors will have more options to invest in Indonesia, including in several attractive businesses that are currently restricted for foreign investment, such as: distribution, construction, and retail business. The relaxation is in line with the instruction of President Joko Widodo to attract as many investors as possible to create jobs. Current Covid-19 pandemic has also affected the economic condition of the country, and attracting foreign investors is one of the solutions to improve the current employment situation.

So far the government has not given a definitive schedule when this draft will be officially enacted, we will keep you updated on this particular matter. Should you have any question with respect to the content of draft new negative list including the foreign ownership restriction for a specific business you wish to carry out, please do not hesitate to contact us.