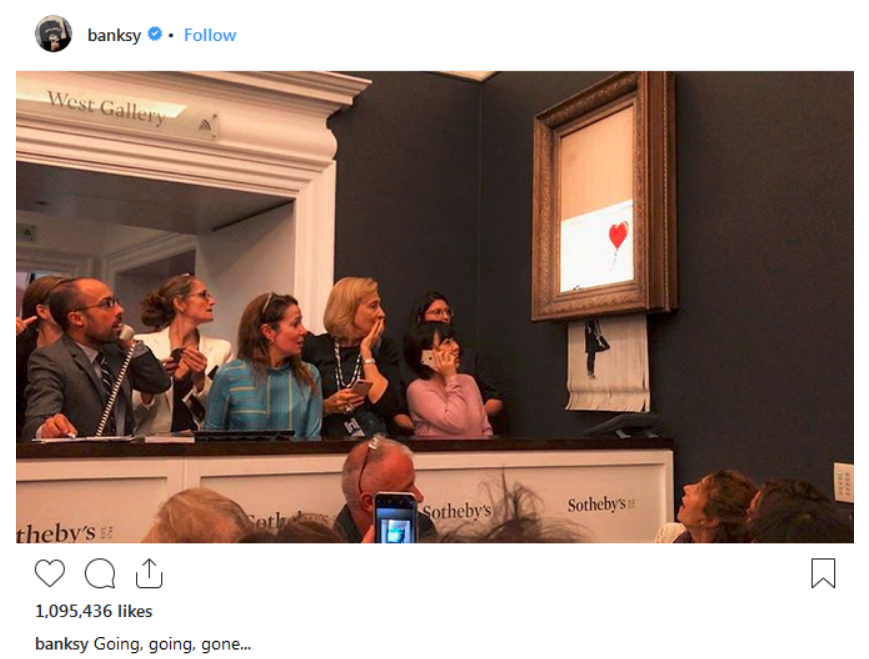 Infamous satirical artist Banksy made waves recently by setting up a work to “self-destruct” immediately after being sold for over £1.04 million (approx. $1.56 million CAD at current value). The spray-painted canvas piece “Girl With Balloon” was sold at auction at Sotheby’s in London, in a custom frame provided by the artist. As it turned out, the frame concealed a shredder, and immediately after being purchased, the canvas descended into the lower portion of the frame only to emerge in strips out the bottom of the frame.

Banksy posted the above image of the destruction on Instagram, with the caption “Going, going, gone…”, and followed up with an explanatory video showing how he hid a shredder in the frame:

The stunt is extremely ‘on-brand’ for the notorious vandal-artist, and appears to have delighted the very art critics and connoisseurs being lampooned. “We’ve just been Banksy’d” said Alex Branczik, senior director at Sotheby’s, who went on to describe the prank as “a little piece of Banksy genius”. Although one might expect that the buyer would feel less sanguine about the destruction, that does not appear to be the case. Per a report by The Guardian, the art collector has confirmed that they will proceed with the £1.04 million purchase, stating that she “was at first shocked, but gradually I began to realise that I would end up with my own piece of art history.” Sotheby’s Branczik has been similarly reverential, initially stating that “You could argue that the work is now more valuable”. The self-destructing piece has since been retitled as “Love Is In the Bin”, which Branczik describes as “the first artwork in history to have been created live during an auction.”

The prank is also a good reminder of artists’ rights in their works beyond the sale of the physical object. In this case, of course, Banksy most likely did not have the right to destroy his own work, since the piece had just been sold at auction to a new owner. Assuming that art collector had property rights in the physical work of art, even Banksy did not have the right to destroy it after it had been legitimately purchased, but then only he could get away with it and be seen as creating a new work in the process. However, it is notable that if anyone else had publicly destroyed the work as Banksy did, then that person would have violated both the property rights of the art collector, as well as Banksy’s moral rights as the author of the work.

Under copyright law, the authors of works are entitled to certain inalienable and non-transferable moral rights that dictate how their works may be used. For example, Canada’s Copyright Act provides that authors hold the right to have their works be attributed to them (or not) where reasonable, and also the right to the integrity of their work. These rights do not transfer when a work of art is sold, or even when copyright in a work is transferred or assigned, and instead remain permanently with the author of the work.

The author’s right to the integrity of their work is infringed if their honour or reputation is prejudiced by any (i) modification, mutilation, or distortion of their work, or (ii) use of the work in association with a product, service, institution or cause with which the author does not wish to be associated. So, for example, it may be an infringement of moral rights to vandalize an original artwork, or to present it in association with a message that is contrary to the views of the artist. However, it is important to keep in mind that prejudice to an author’s honour or reputation is assessed by Canadian courts both subjective and objectively. This means that it is not enough for the author to feel their honour or reputation has been injured, members of the public (such as other artists) must also agree with the author. Canada’s Copyright Act further specifies that certain acts do not alone infringe the author’s right to the integrity of their work, such as merely changing the location of a work or taking steps in good faith to restore or preserve a work.

By way of illustrative example, some readers may recall the infamous attempted restoration of Ecce Homo, a fresco of Jesus Christ in a Church in Borja, Spain. Cecilia Giménez, an 83-year old local churchgoer attempted to restore the century-old painting, and the resulting image became an online viral sensation. Ignoring any issue as to the duration of moral rights, in that case the restoration would most likely not have been found to be an infringement of the original author’s moral rights, as Ms. Giménez’s modifications were said to have been made in good faith: 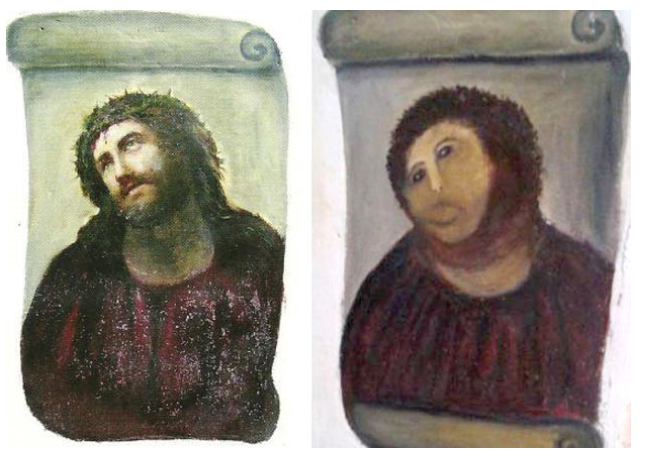 As noted above, unlike copyright in a work (or ownership of the physical object), moral rights in a work may not be transferred or assigned, they always belong to the author. However, an author can waive their moral rights in favour of someone else, such as the copyright owner or a licensed user of the work. This aspect of moral rights makes them an important factor to keep in mind for any transfers of copyright, and should be addressed in any licensing or assignment agreements with the author of a copyright protected work. It is also worth keeping in mind that moral rights subsist for the entire term of copyright in a work, and pass to the estate of an author upon death, so these rights may even need to be addressed posthumously.

There are also other rights that may further set out the ways in which artists’ works may be used. For example, certain jurisdictions (such as the UK and the state of California) provide the artist’s resale right, which entitles artists to royalties on the resale of their works in specific circumstances, such as the sale of a work at auction. This right can ensure artists are compensated proportionately to the full market value of their works, even if the first sale of their work is only for a portion of that value. Although the artist’s resale right does not currently exist at Canadian law, Canadian Artists’ Representation/Le Front des artistes canadiens (CARFAC) has advocated for the Federal government to amend the Copyright Act to include some form of the artist’s resale right.

Moral rights are an important factor to consider whenever you are dealing with an original work of art, by an artist or even a contractor or employee. Although you may have a licence to use the work, or may have purchased it, or may even own the copyright in the work, you must still consider the author’s moral rights in the work. Without an express waiver from the author, you may not be free to use it however you see fit, or to change or destroy it. It is also worth keeping in mind that artists should respect the property rights of art collectors, although in this case the art world appears to have embraced Banksy’s signature brand of irreverence with the colourful creation of “Love Is In the Bin”.