Marijuana remains illegal under federal law. However, there are many states, and a few cities, which have legalized medical and recreational marijuana – creating challenges for employers, as these laws “sprout up” (pun intended) across the country.

Also, prior to now, the caselaw was quite clear – an employer could discipline an employee for lawful use of marijuana. See Coats v. Dish Network, LLC, 350 P.3d 849 (Colo. 2015). But the law appears to be changing, as recent cases indicate that courts are beginning to recognize that employees who are lawful users of marijuana are entitled to some protection.

It is a trend that employers need to watch.

Where is Marijuana Legal?

A quick check of the states where recreational or medical marijuana is legal: 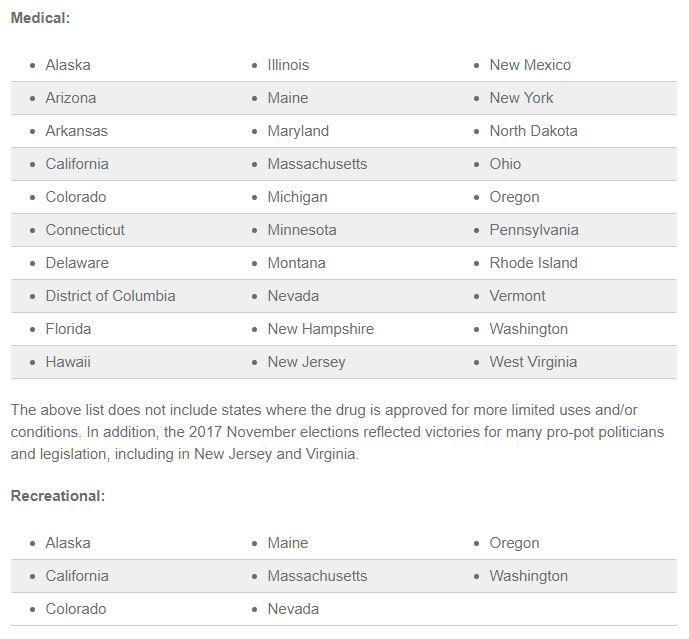 In Barbuto v. Advantage Sales & Marketing, LLC, the Supreme Judicial Court of Massachusetts examined the legal rights of those using medical marijuana, after an employee, terminated for a positive marijuana test sued her former employer. 477 Mass. 456 (2017). Plaintiff Barbuto, who suffered from Crohn’s disease, was offered a position with Advantage. She informed a company representative that she would test positive for marijuana on the mandatory drug test, as she was prescribed medical marijuana. Following assurance that the marijuana use should not be a problem, Ms. Barbuto underwent the drug test and completed her first day of work. However, that evening, a Human Resources representative contacted Ms. Barbuto and terminated her for testing positive for marijuana, allegedly stating, “we follow federal law, not state law.” Ms. Barbuto sued Advantage as well as the individual who terminated her employment.

A lower court granted a motion to dismiss on most claims. However, this was reversed on appeal, finding that Ms. Barbuto had a claim for handicap discrimination in violation of Massachusetts state law, as she was lawfully using medical marijuana. The employer advanced two arguments: Advantage argued that (1) the only accommodation Ms. Barbuto requested was illegal under federal law and thus “facially unreasonable” and (2) even if Ms. Barbuto was a “qualified handicapped person,” she was terminated because she failed to pass a drug test required to be passed by all employees, not because of her handicap. The appellate court rejected both arguments but was careful to note that allowing Ms. Barbuto’s handicap discrimination claim to survive did not necessarily mean Ms. Barbuto would be able to successfully establish a claim. The court opined that at later phases of the case, the employer may be able to successfully show that Ms. Barbuto’s use of medical marijuana constituted an undue hardship. Following the July 2017 decision, the case continues to move through Massachusetts’s lower court system.

The issue moved across state lines into Connecticut the following month, with a federal district court’s August 8, 2017 decision in Noffsinger v. SSC Niantic Operating Company LLC. No. 3:16-CV-01938(JAM), 2017 WL 3401260 (D. Conn. Aug. 8, 2017). In Noffsinger, once again within the context of a motion to dismiss, the court addressed an issue of first impression and held that a plaintiff who uses marijuana for medicinal purposes in compliance with Connecticut law may maintain a cause of action against an employer who refuses to employ her as a result of this use.

The case arose when the plaintiff, Katelin Noffsinger, an individual who had been prescribed medical marijuana as a treatment for posttraumatic stress disorder, applied for and was hired as a director of recreational therapy for a long-term care facility. As part of the onboarding process, Ms. Noffsinger was required to take a drug test. She provided the employer with her medical marijuana registration certificate, and said she only used the drug when off-duty. However, the day before Ms. Noffsinger was scheduled to begin work, the company rescinded her job offer due to her positive drug test result.

Ms. Noffsinger sued, including claims of a violation of the Connecticut “Palliative Use of Marijuana Act” (“PUMA”) and negligent infliction of emotional distress. The company moved to dismiss. In its decision denying the employer’s motion with respect to the above claims, the federal court carefully considered PUMA, which provides explicit protection against employment discrimination based on use of medical marijuana. Specifically, PUMA provides that, “[n]o employer may refuse to hire a person or may discharge, penalize or threaten an employee solely on the basis of such person’s or employee’s status as a qualifying patient…” Conn. Gen. Stat. Ann. § 21a-408p. The employer argued that PUMA was preempted by the Federal Controlled Substances Act, the Americans with Disabilities Act and the Federal Food, Drug, and Cosmetic Act. The court concluded that the state law was not preempted by any of the asserted federal laws and denied the company’s motion to dismiss on the PUMA and negligent infliction of emotional distress claims. The case is currently being litigated in the District of Connecticut.

Finally, the little green plant also hit the big apple this summer, within the context of an administrative hearing at the New York City Taxi and Limousine Commission. There, an Administrative Law Judge concluded that the Commission could not revoke a driver’s TLC license after the driver tested positive for marijuana, due to his legal use of the drug in accordance with the New York State Compassionate Care Act. The ALJ reasoned that a finding of unfitness for a license based upon a “failed drug test as a result of illegal drug use” was not applicable to the driver’s legal use. While not an employment case, such a decision may provide insight into where both the city and state of New York will go in the near future.

Do the above decisions mean employees are free to “light up” in your workplace?

Can employees come to work high?

Many employers are confused about the legalization of marijuana, but it is a simple proposition: Employers should follow state law, and treat an employee who is lawfully using marijuana the same way they would treat any employee’s lawful use of another drug.

However, the decisions depict a trend of court acceptance of off-duty use of medical marijuana in accordance with state laws. Such decisions have important ramifications for employer drug-testing programs and policies – both of applicants and employees. Before terminating an employee or rescinding a job offer based on a positive test, employers should carefully consider any relevant statutory language (e.g., does your state provide specific protection to employees like Connecticut’s?) as well as recent case law. At the end of the day, an employer’s ability to restrict off-duty use of marijuana may just be off-limits.