Electronics and Computer Patents in Vietnam

Vietnam today is considered a strong potential market for the electronics and computer industry, with a large population of nearly 100 million and a high rate of goods consumption. In addition, the Vietnamese population is very young, with nearly one-third being between the ages of 15 to 29, a group that tends to be the most avid consumers of electronic products, such as mobile phones and computers.

Additionally, more and more research and development is taking place in Vietnam, due to Vietnam’s very strong engineers. Vietnamese students place at the top in many global math and science competitions, and often surpass teams from the major economic powers in annual contests such as ABU Robocon, which Vietnam won in 2014, 2015 and 2017. An increasing number of overseas Vietnamese who found success in Silicon Valley are also returning to establish startups in their homeland.

One way to assess the development and investment trends in this dynamic, leading-edge industry in Vietnam is by examining patterns in intellectual property protection. The following charts have been compiled from statistics on patents filed and granted in Vietnam over a seven-year period from 2010 to 2016. It is hoped that the data will provide a useful overview of the electronics industry in comparison to other sectors in Vietnam, as well as the overall interest of foreign enterprises in the Vietnamese market over the years.

Patent applications in the electronics sector have sharply increased in recent years and now account for more than one quarter of all applications filed, and over 20% of total patents granted. 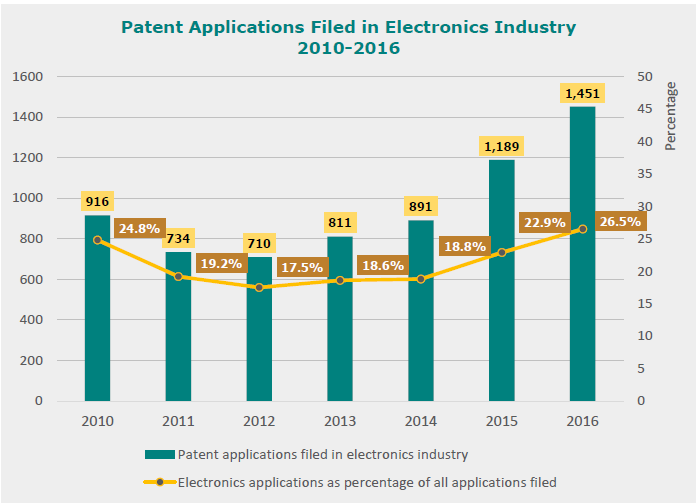 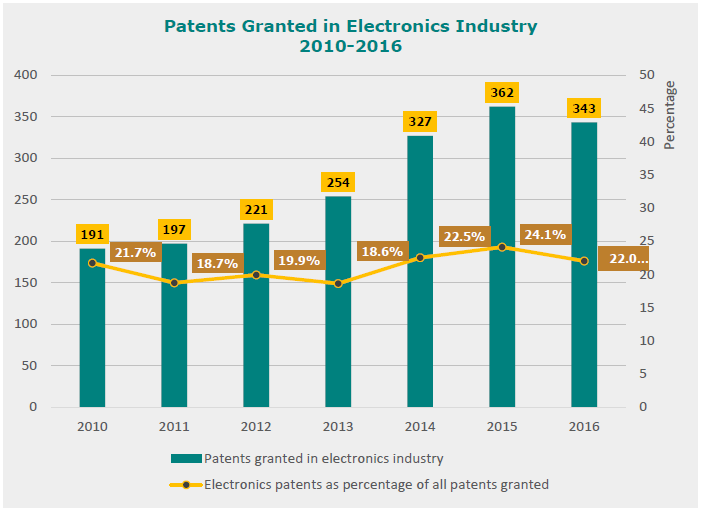 As electronics technology tends to advance much more rapidly than other technologies, patents in the electronics industry should ideally be granted more quickly than patents in other fields, to provide appropriate benefits to inventors. The figures below show that the average time taken to prosecute an application in the electronics industry has been improving since 2014, and this improvement has outpaced the average rate of improvement in all fields at the Vietnam Patent Office. As shown below, it typically takes a little over four years for an electronics patent application to mature to granting. 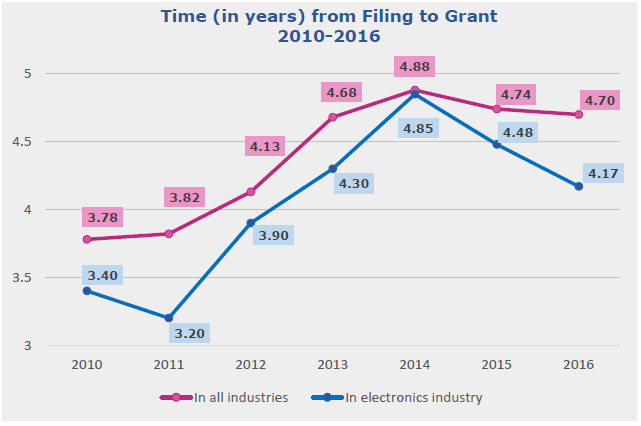 As Vietnam is still developing its electronics sector and has only recently seen major investments, the number of domestic patent applications filed in the industry is not yet significant compared to other countries, although it is on the rise. Most electronics applications are filed by overseas applicants from countries/regions with well-developed electronics industries.

Among these, Japan is currently the leading filer of electronics patent applications in Vietnam. Korean applications have also been steadily increasing and now rank third, ahead of Europe (i.e., all member states of the European Patent Organisation combined). Also notable is the dramatic increase in the proportion of Chinese applications and the significant decrease in applications from the United States.

A similar pattern can also be seen at the company level. Over the period of this study (2010-2016), the top five patent filers included two Japanese companies, one Korean company, one Chinese company, and one American company. 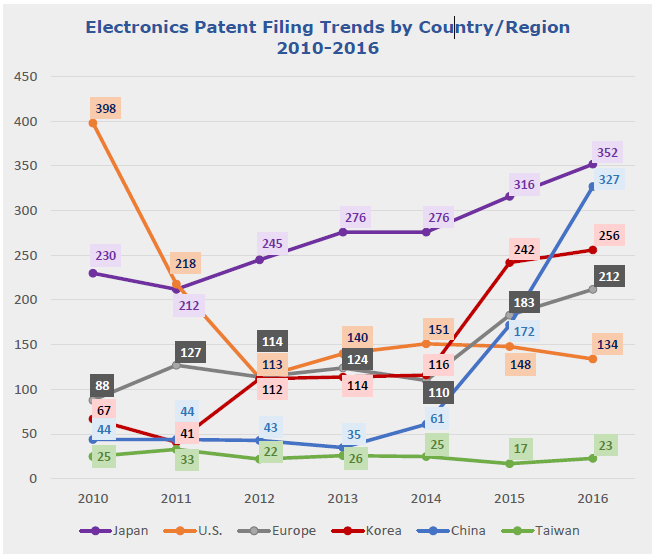 The Vietnamese government has placed a consistent focus on developing the computer industry, contributing to a corresponding increase in patent applications filed in this industry. Additionally, as a country shifting from agriculture to industry, there is increasing demand in the automation industry in Vietnam, and applications in this field have naturally also risen. 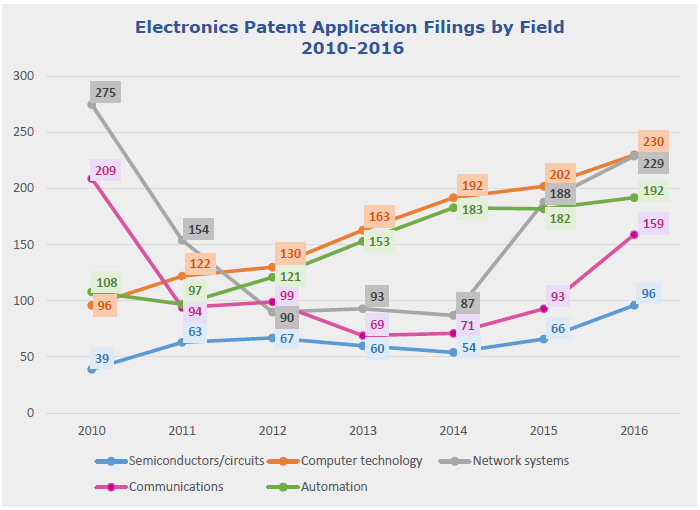 Though, as noted above, prosecution time has improved in recent years, the mechanism of accelerated examination needs to be more efficient to enable manufacturers and importers to obtain patents in a shorter time. Recent developments, such as the pilot Japan-Vietnam Patent Prosecution Highway (PPH) project, have helped to accelerate prosecution in many cases. Proactive conforming of claims to patents granted abroad (not under the PPH) can also help accelerate prosecution.

Another challenge in the electronics industry involves trade secrets. Due to the rapid increase in research and development in Vietnam, it is important for investors to protect their trade secrets through various measures, such as incorporating trade secret provisions into the registered work rules of their company.

The Fourth Industrial Revolution, or “Industry 4.0,” has become a widely discussed topic in Vietnam, with the government and its citizens developing a much greater awareness of the importance of the revolution. With the government supporting policies to drive “Industry 4.0,” including the creation of “smart cities,” the market for electronics products in Vietnam should be booming in the coming years, presenting an excellent opportunity for patent owners to commercialize their intellectual property, while also necessitating the need for increased efficiency in the granting of patent applications to safeguard owners’ rights.