The outbreak of Coronavirus in China did not prevent the State Administration of Press and Publication (the “SAPP”), China’s sole game regulatory authority, from performing its duties of approving games and regulating the game industry. From the end of February to early March 2020, the SAPP not only uninterruptedly released two batches of game licenses, but also made some important moves indicating it will strengthen the enforcement of game license rules.

The game license rules require each online game must obtain a license before it is commercially launched in China. Such requirement is not new at all-- it had existed back to the days when video games were sold in boxed copies, and remains and applies till now to all online games. However, before July 1, 2016, when the Notice on the Administration of Publishing Services of Mobile Games (the “Mobile Regulation”) took effect, most app stores did not mandatorily require licenses for mobile games. After the implementation of the Mobile Regulation, China’s game approval system has gone through some ups and downs, as summarized in the chronological order in below: 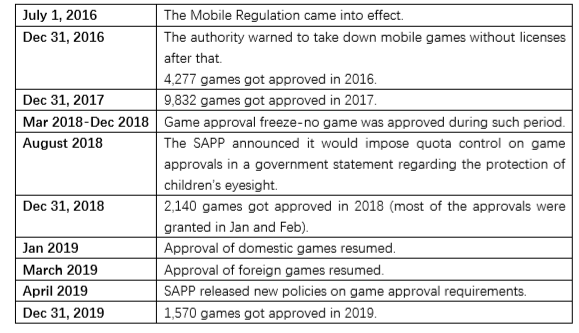 Though the Mobile Regulation made it quite clear that game approval is a must for the commercial operation of any mobile game, such legal requirement has not been strictly implemented by Apple, which is a broadly known loophole that allows unapproved games to get distributed and commercialized through Apple’s app store. However, Apple recently announced that from July 1, 2020 it would require publishers of paid games or games featuring in-game purchases to provide ISBN, the publishing license number granted by the SAPP upon approval. This is not the first time that Apple mentioned an ISBN is necessary to get the game published, but it is the first time that Apple set a deadline for the implementation of such a requirement. It seems Apple will request an ISBN for any new game commercially released after July 1, 2020, but it remains uncertain how Apple will treat existing games after that.

We do not think Apple’s announcement on its enforcement of the Mobile Regulation is unexpected or a false alarm again. It is not only because the SAPP has a solid legal ground to ask Apple to do so, but also the SAPP is now in a good position to urge Apple to close the loophole, for the following reasons:

1. Since Jan 2019, the SAPP has been regularly issuing game licenses every month, in particular, it has been adopting its updated game approval requirements after April 2019.

2. In 2019, the roles of the SAPP and Ministry of Culture were further clarified that the former is the sole game regulatory authority in China and the latter has no authority on game approvals but is responsible for enforcement of the former’s decision. As such, the SAPP now has full power to get its policies and decisions implemented.

3. China governments never regard Apple’s app store as a completely unregulated market place. It is not uncommon to see the removal of the game if any of its content is found problematic by the authorities, e.g., the recent takedown of Plague Inc. featuring the infection of a lethal virus in the context that the game became more popular during Coronivuris epidemic. Moreover, as a practice, the SAPP usually requires the game company to take down its game from Apple’s app store before it starts to review the ISBN application for the same game.

In addition to pushing Apple to enforce the Mobile Regulation, the SAPP also seeks to tighten the enforcement of game license rules with a focus on Android app stores as well as other online platforms used for game distribution or promotions. In a recent video conference organized by the Beijing branch of the SAPP, the local authority emphasized game license rules must be strictly implemented. In particular, the games will be cracked down and their publishers should be held responsible in the following circumstance: (1) the game is not approved, however, the publisher uses a fake ISBN or ISBN granted to other game; (2) though the game is approved, the version released is substantially different from the approved version; and (3) the marketing and promotion of unapproved games. It is expected similar conferences will be held by provincial authorities to make the law enforcement consistent nationwide in near future.

Since the SAPP has sent a clear signal that more law enforcement activities will take place in 2020, game companies that have not obtained ISBNs for their games are advised to initiate or experdite game license applications as soon as possible. In particular, mobile game companies may need to revisit their China business strategy if they only focus on Apple’s app store and have not considered obtaining licenses for their games.