Despite a challenging year for dealmaking, in Q4 the global energy sector reached its highest quarterly deal value since before the financial crisis. A total of US$75.5 billion in deals announced in the quarter represented a 78% increase on Q4 2019 and the highest quarterly total since Q3 2007. 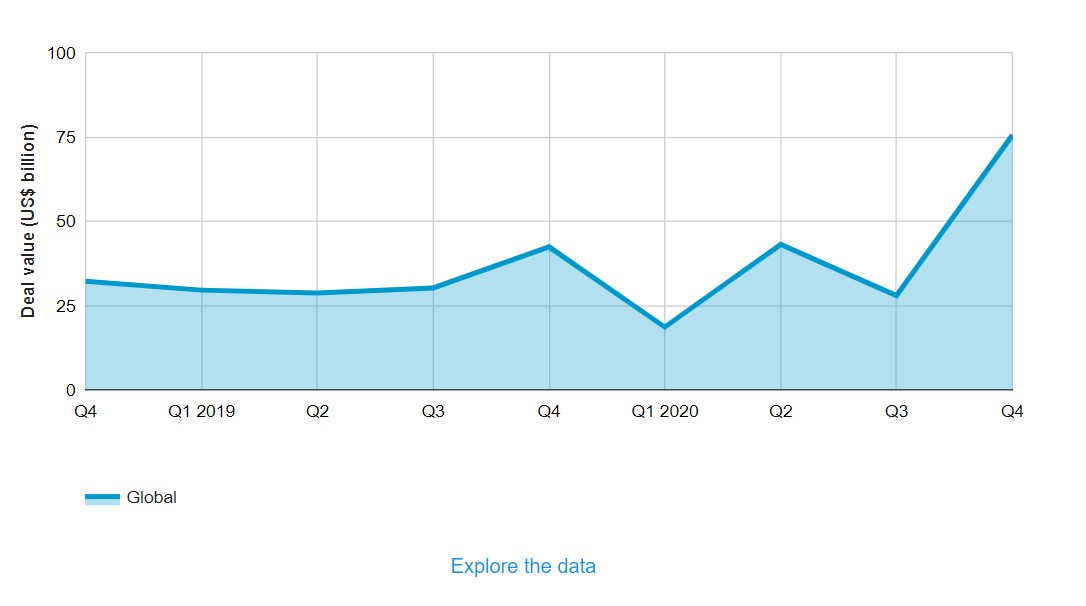 Deal volume also rebounded sharply in the final quarter, with a total of 229 announced deals standing marginally behind a record Q4 2019—a clear return to pre-COVID levels of activity.

As a result of the strong final quarter, 2020’s US$165.2 billion deal value finished 26% above the total in 2019, while volume dipped slightly, as dealmakers found ways to adapt and source new growth opportunities amid a challenging investment climate.

Despite a sharp downturn in demand amid the COVID-19 pandemic, dealmaking targeting the US energy sector remained relatively stable in 2020. Dealmaking in the sector finished the year just 2% below the total volume in 2019, while value decreased by 16%. Activity was bolstered by an appetite for renewable assets, which continued to attract investor interest over the course of the year.

The largest deal of the final quarter was the US$7.5 billion bid for US-based energy holding company PNM Resources by AVANGRID—a subsidiary of Spanish electricity giant Iberdrola. The all-cash offer highlights AVANGRID’s expansion into clean energy distribution and transmission and, if approved, will create the third-largest renewables business in the US. The deal marked Iberdrola’s eighth corporate transaction since the beginning of the pandemic, after pledging to spend €10 billion a year on renewables and energy networks.

Elsewhere in the sector, companies looked to slim down amid a volatile economic climate. This trend was seen in Centrica’s US$3.6 billion sale of US business Direct Energy to US-based power company NRG Energy, announced in July. Centrica came under pressure in 2020 as the COVID-19 crisis prompted a steep decline in energy demand.

Western European deal activity remained active in 2020. A total of US$44.5 billion changed hands over the course of the year—a 10% uptick compared to 2019. Deal volume, meanwhile, experienced a resurgence in the final quarter of the year.

The largest deal to take place in Q4 was Wheelabrator’s sale of its UK energy-from-waste (EfW) business to an infrastructure fund managed by First Sentier Investors (FSI), in a deal valued at US$2.3 billion. The deal follows on from FSI’s recent agreement to acquire a 50% stake in the Multifuel Energy Joint Venture from Scotland-based energy multinational SSE, announced in October. Following completion of the US$1.2 billion deal, FSI has announced its intention to combine the two recently acquired assets to create the UK's leading waste-to-energy platform.

Investment in the UK’s EfW infrastructure is needed to meet the country’s current waste capacity gap and fulfill government ambitions to move away from the use of landfill sites. A recent report from Policy Connect states that EfW infrastructure provides the most cost-effective and lowest carbon solution for household and municipal waste as the UK transitions to decarbonized heat and power by 2050. Private investment will play an important role in filling this gap.

The transaction completes a busy year of dealmaking in the Spanish renewables sector, as companies look to beef up their renewables capabilities in order to meet government targets. Earlier in the year, global energy company EDP announced its US$3.1 billion acquisition of Spanish electricity producer Viesgo’s renewables business. The deal completed in December following regulatory approval.

Backed by government incentives, an investment drive is taking place in Spain’s wind and solar assets. In line with the European Green Deal, the Spanish government aims to reach emissions neutrality by 2050. To reach this target, it is estimated the country will need to install around 27 GW of new solar PV and 25 GW of new wind capacity.

The Latin America and Caribbean region recorded its highest quarterly deal value on record for the sector in Q4, pushing 2020’s total deal value 52% ahead of 2019, while volume shrank by 27%. Dealmaking within Chile’s power sector is ramping up, with two transactions announced in the final quarter making it into the top ten energy deals of the year.

The largest of these deals was Enel Americas’ proposed merger with EGP Americas, the South and Central American renewable energy business of Enel Green Power (EGP), valued at US$4.9 billion. The merger would enable Enel Americas to expand its operations in Central America and to pursue further opportunities in renewables, according to the company.

Dealmaking within the energy sector displayed resilience in what proved to be one of the most challenging years for the industry. Energy M&A’s robust performance can largely be attributed to an increasing appetite for renewables assets, with dealmakers ramping up investment in the sector despite the volatile economic climate.

This trend will continue to play out in 2021 as governments across the globe continue to push for a green recovery from the COVID-19 crisis. As a result, M&A will be a vital tool for companies looking to bulk up their renewables capacity and dispose of more carbon-intensive assets.