A Glimpse of Things to Come: OSHA’s Soon to Be Updated Hazard Communication Standard

In the Trump Administration’s Unified Agenda of Regulatory and Deregulatory Actions (Regulatory Agenda) issued on October 17, 2018, the U.S. Department of Labor’s Occupational Safety and Health Administration (OSHA) published a Proposed Rule Stage item titled “Update to the Hazard Communication Standard,” RIN 1218-AC93, and scheduled the Notice of Proposed Rulemaking (NPRM) to be issued by March 2019. The full description of the item is:

OSHA and other U.S. agencies have been involved in a long-term project to negotiate a globally harmonized approach to classifying chemical hazard, and providing labels and safety data sheets for hazardous chemicals. The result is the Globally Harmonized System of Classification and Labeling of Chemicals (GHS). The GHS was adopted by the United Nations, with an international goal of as many countries as possible adopting it by 2008. OSHA incorporated the GHS into the Hazard Communication Standard (HCS) in March 2012 to specify requirements for hazard classification and to standardize label components and information on safety data sheets, which will improve employee protection and facilitate international trade. However, the GHS is a living document and has been updated several times since OSHA’s rulemaking. OSHA's rulemaking was based on the third edition of the GHS and the UN recently completed the seventh. OSHA is conducting rulemaking to harmonize the HCS to the latest edition of the GHS and to codify a number of enforcement policies that have been issued since the 2012 standard.

OSHA first notified the Office of Management and Budget (OMB) in the spring of 2018 that it intended to publish this NPRM to update its HCS to align with the latest edition of the GHS; the only difference is that it scheduled it to be issued by February 2019 instead of March 2019 --a difference of only one month. OSHA plans to update its HCS “to the latest edition of the GHS and to codify a number of enforcement policies that have been issued since the 2012 standard.” The official text of the GHS -- also known as the “Purple Book” -- was first published and implemented by the United Nations (UN) in 2003, and is amended every two years. OSHA’s final rule incorporating the 3rd Revised Edition of the UN GHS (Rev 3) became effective on May 25, 2012 (HCS 2012) and full implementation was required as of June 1, 2016. Currently, all substances and mixtures are required to comply with HCS 2012, as the transition period ended on June 1, 2015, for manufacturers and December 1, 2015, for distributors. OSHA extended the deadline under very specific circumstances on May 29, 2015, but those circumstances are considered to be limited and must be documented to demonstrate compliance. The 2012 final rule significantly altered the previous HCS, but as GHS Rev 3 was released in 2009, the HCS has not been updated since that time, even though the final rule became effective in 2012; the proposed rule that incorporated the Rev 3 changes was issued on September 30, 2009. OSHA has been planning to further update the HCS since Fall 2014 when RIN 1218-AC93 first appeared in the Regulatory Agenda. No action on the item was listed until the Fall 2016 Regulatory Agenda posted that it would issue a NPRM in October 2017, but subsequent Regulatory Agendas only listed the NPRM status as “TBA” until the Spring 2018 Regulatory Agenda set the timeframe for February 2019.

As the UN Sub-Committee of Experts on the Globally Harmonized System of Classification and Labeling of Chemicals (UNSCEGHS) released the seventh edition (Rev 7) of the GHS in July 2017, OSHA’s HCS specifically needs to be updated to conform with not just Rev 7 but also with the fourth (Rev 4), fifth (Rev 5), and sixth (Rev 6) revised editions. Rev 7 includes both amendments and some newly added content and guidance relating to the classification and labeling of chemical substances and mixtures. OSHA announced that to maintain alignment with GHS, it would be updating its HCS in the following ways to align potentially with GHS Rev 7:

The above list is only a small portion, however, of all of the amendments that GHS has integrated since Rev 3. Below is a comprehensive list of changes made to Rev 4, Rev 5, Rev 6, and Rev 7; we anticipate that some of the below revisions will also be integrated.

The full list of edits made to Rev 3 and incorporated into Rev 4, issued in 2011, is available here; some of the highlights are:

The full list of edits made to Rev 4 and incorporated into Rev 5, issued in 2013, is available here; some of the highlights are:

The full list of edits made to Rev 5 and incorporated into Rev 6, issued in 2015, is available here; some of the highlights are:

The full list of edits made to Rev 6 and incorporated into Rev 7, issued in 2017, is available here; some of the highlights are: 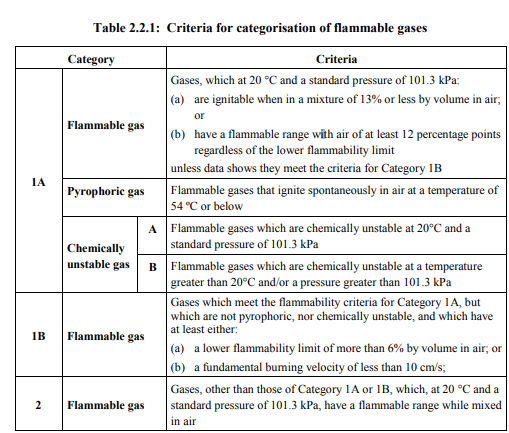 2. Miscellaneous amendments intended to clarify the definitions of some health hazard classes;

3. Additional guidance to extend the coverage of Section 14 of the SDSs to all bulk cargoes transported under instruments of the International Maritime Organization (IMO), regardless of their physical state (Annex 4);

4. Revised and further rationalized precautionary statements in Annex 3; and

5. A new example in Annex 7 addressing labeling of small packagings with fold-out labels.