Foreign deals with the US slowed considerably as China turned its attention to Western Europe in 2018. The trend looks likely to continue through 2019

Considering the headwinds faced by outbound M&A from China—including concerns about a trade war with the US, stricter regulatory oversight in both the US and Europe and a slowdown in the domestic economy—foreign dealmaking held up well in 2018. The 2018 total dropped only moderately when compared with 2017, declining 12.6% to US$94.7 billion. 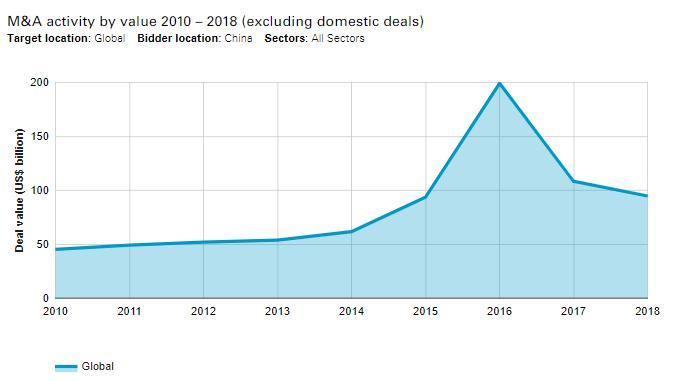 This tenacity reflects the nimble and flexible approach of corporate China towards foreign M&A. On the one hand, Chinese deals into the US fell 65% in 2018 to US$2.97 billion—a fraction of the 2016 peak of US$56.7 billion. Last year the US was only the ninth largest destination for Chinese M&A by value. On the other hand, Chinese M&A into Western Europe posted a strong recovery in 2018, rising 78.3% to US$58.8 billion, second only to the 2016 record of US$90.6 billion.

As for sectors, energy, mining and utilities (EMU) came out on top, at US$37.5 billion. The EMU total for 2018 was boosted greatly by the planned US$27.4 billion purchase by China Three Gorges Corp., already the largest shareholder in Energias de Portugal (EDP), of the 76.7% stake it did not already own. Technology, media and telecoms (TMT) came second, at US$14.9 billion. One sizeable TMT deal in 2018 was the US$4.1 billion offer for a 75.9% stake in Nexperia, a Dutch semiconductor manufacturer, by Wingtech Technology.

A recent development is the increasing interest in M&A in consumer industries. This sector came in third in 2018, with US$11.0 billion in total value—the second highest total on record. This included the US$5.4 billion cash tender offer for 100% of the shares in Finland’s Amer Sports Oyj, a sports equipment manufacturer, by a consortium led by ANTA Sports Products. This is an example of Chinese companies’ interest in acquiring businesses that can be used to sell products to the country’s growing middle class.

The shift in focus from the US to Europe reflects increasing tensions between China and the US. Given the close links between many Chinese tech companies and the military, the US federal government fears that some Chinese acquirers are interested not only in a commercial return, but also in using technology investment to increase Chinese military power.

This concern led to the passing of the Foreign Investment Risk Review Modernization Act (FIRRMA), which became law in August 2018. It covers deals involving “critical technology or critical infrastructure that would affect US leadership in areas related to national security,” as well as sensitive personal data that could be used to threaten national security. Such deals must now be reported to the Committee on Foreign Investment in the United States (CFIUS), which will recommend to the President whether to accept deals or block them.

Some European governments have made similar moves. Under rules introduced in Germany in 2018, ministers can block any deal that “endangers public order or security” when at least 25% of a company is for sale. France, Italy and the UK are also looking at tightening their screening of foreign takeovers.

China’s government remains keen on foreign M&A as a whole, but wants dealmaking activity to be consistent with government priorities. This approach is set out in outbound direct investment guidelines published in 2017, which creates three categories.

“Encouraged” investments are those that further the “One Belt, One Road Initiative” to improve China’s connections and supply sources with other nations, enhance China’s technical capabilities, or relate to research and development or natural resources. The bid for EDP reflects this priority. “Restricted” investments include property and private equity. “Prohibited” investments include those contrary to national interests.

Despite changes in government policy both in China and in target countries, dealmaking opportunities could still be plentiful in 2019 and beyond.

Private equity investments may be considered as “Restricted,” and the bulk of deals in 2018 were trade sales to companies in the target company’s sector. However, there was still US$29.2 billion of deals backed by private equity in 2018, though this is well below the 2017 peak of US$52.8 billion. One PE foray was the US$1.3 billion offer made for Australia’s SIRTeX Medical by a consortium led by CDH Investments. This deal reflects Chinese PE interest in growth companies.

Moreover, the value of consumer deals in 2018 was close to its 2016 peak of US$11.4 billion, even though these are not “Encouraged” investments. Consumer M&A is also unlikely to be hit by national security concerns in target countries, so this could be a busy sector in 2019. The high prices many Chinese bidders are willing to pay also make target companies willing to listen. The Amer Sports bid had an EBITDA multiple of 23.

Even the talk of national security obstacles needs nuancing. Prospects for M&A in the US look limited, but some European countries will remain enthusiastic about Chinese dealmaking in 2019. These include highly indebted states that need the investment, such as Portugal—the largest target country by value in 2018 due to the EDP bid.

These countries are unlikely to be deterred by a December 2018 agreement by EU member states under which the European Commission would investigate foreign investment in “critical sectors” ranging from infrastructure to food supply—individual member states would still make the final decision on whether to block investments. Even in countries that now have qualms about Chinese M&A in sensitive sectors there are opportunities in other sectors. The UK was the fourth biggest target country by value in 2018, at US$5.6 billion.

In spite of some formidable obstacles, it appears that China still has a strong appetite for outbound M&A, and plenty of opportunities for indulging this appetite.