What can starlings teach us about better managing data privacy?

Groups of up to 25,000 starlings have been seen flying in abstract, yet highly organised formation. If you’ve witnessed a starling murmuration, you might recall that the flock – almost swarm-like – appears not to have a central leader, yet each bird knows precisely what direction to take at any given moment to enable the flock to move in perfect synchronicity.

But this is not just a pretty stunt; rather, it is an illustration of how optimal outcomes can be produced when intelligence is aggregated and utilised at a group level, an emerging concept known as swarm intelligence.

Swarm intelligence is the theory underpinning swarm learning, a machine learning technique premised on information sharing across a secure, decentralised, and privacy-preserving network to enable intelligence to develop at a group level.

Put simply, individual systems upload insights and learnings they produce to a common network, which incrementally refines a core model that all participants have the benefit of using: i.e. the data is locally stored and only the insights are shared and used centrally. 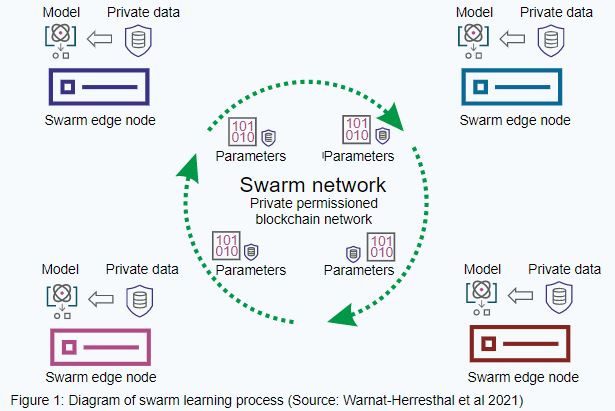 Why use swarm learning?

In 2021, a study demonstrated that swarm learning can produce outcomes superior to those produced by local, centralised and federated learning models.

Most critically, the study demonstrated how swarm learning can simultaneously:

Where to from here

The concept of swarm learning is gaining traction worldwide in a range of industries. In addition to the medical application, the theoretical underpinning of swarm learning was tested in the context of transportation engineering and in the Internet of Vehicles.

The EU is ‘operationalising’ its privacy regulation, the GDPR, in the AI context by investing in the Gaia-X Project, which is pioneering the practical application of swarm learning usage across Europe. With over 300 participating companies and government bodies spanning the commerce, science and politics sectors, Gaia-X is developing a decentralised and secure data-sharing network. An early identified application of Gaia-X is to enable banks to identify credit fraud based on fraud profile-based data shared across Europe on a privacy-preserving swarm learning network.

One swarm does not a summer make

While the benefits of an effective swarm learning network are overwhelming, there are challenges that remain unaddressed.

Debate ensues about the scope for regulating blockchain: how do we protect the blockchain from exploitation that ultimately harms consumers while ensuring it operates free from restrictive government interference? This challenge arises in the context of swarm learning: regulation of the swarm learning blockchain undermines its decentralised and peer-to-peer quality, which could reduce user trust in the system. Entities will not share their learnings or insights to a network that they do not trust. With limited users, the breadth of knowledge in the network is limited, which reduces the optimality of the results produced by the core model.

Further, despite the decentralised and ‘leaderless’ nature of swarm learning, it remains unclear who sets the criteria for joining the swarm network. What happens to unauthorised entities that are effectively excluded from the benefits of aggregated knowledge? Could such exclusion even constitute anticompetitive or collusive conduct?

While interesting regulatory questions remain unresolved, there is no doubt that swarm learning pushes the boundaries of innovation and the possibility of information-sharing in a world increasingly concerned with privacy preservation.