On prior occasions (here and here), we have written about the high rate at which animal rights organization People for the Ethical Treatment of Animals (PETA) euthanizes the animals that it takes in at its Norfolk, Virginia animal “shelter.” All public and private animal shelters and other animal releasing agencies in the Commonwealth of Virginia are required to submit an annual summary of their animal custody records to the Virginia Department of Agriculture and Consumer Services (VDACS). PETA’s report for 2020 recently filed with VDACS reveals that PETA’s death rate still outpaces the average rate at which other shelters in Virginia euthanize animals.

The first two graphs below were constructed from data set forth by PETA on its annual reports for 2019 and 2020 as filed with VDACS which are available publicly on the agency’s website. The report format requires the shelter to quantify the various animals that it took into its custody during the calendar year and to report what happened to them by group.

As the graph below shows, PETA continues to euthanize the majority of the dogs and cats that it takes into custody. 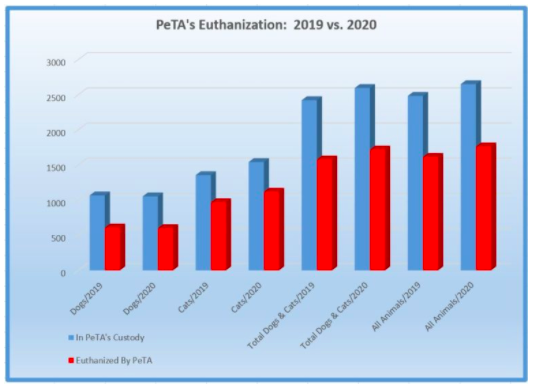 Furthermore, PETA’s 2020 euthanization rate for dogs, cats, dogs and cats combined and all animals combined shows little change from 2019 and continues to range from 57 to 73 percent: 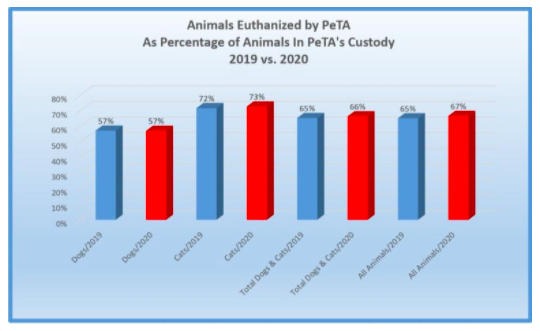 What is more troubling — which continues a trend that has been apparent for several years — is that the rate at which PETA euthanized dogs and cats in 2020 vastly exceeded the rate at which dogs and cats were euthanized by other shelters in Virginia in 2020. The following three graphs compare PETA’s 2020 euthanasia rate for dogs, cats and dogs and cats combined with the 2020 euthanasia rates for private shelters, public shelters and all agencies combined in Virginia. The percentages were caluclated from the data reported by VDACS on its website. 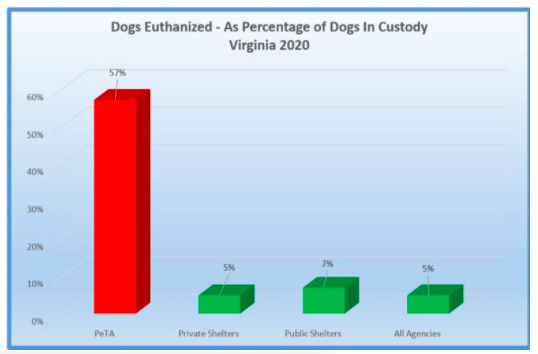 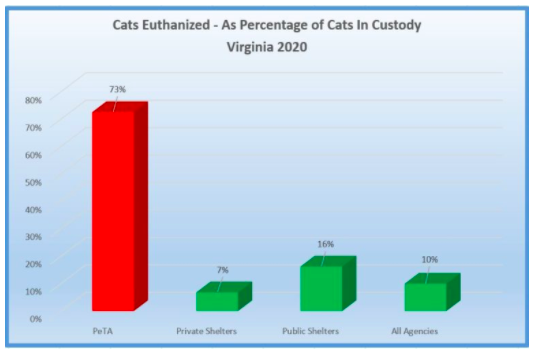 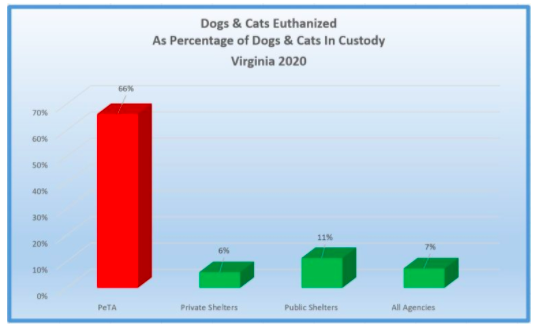 Contemporaneously with the filing of PETA’s 2020 VDACS report, a senior online news content producer for PETA attempted to defend PETA’s high death rate in an article for One Green Planet entitled “What PETA Has to Say About Animals Euthanized at Their Shelter.” This article largely recycled the arguments that we analyzed last November and found to be unconvincing, including PETA’s attempts to defend its euthanasia statistics with a handful of examples of animals that have terminal illnesses beyond veterinary help or personality issues that make adoption an impossibility. No one could seriously contest that euthanasia was the appropriately humane outcome for the examples that PETA chose to rely on. But this is a tiny number of cases out of the thousands of dogs and cats euthanized by PETA. And are these carefully selected examples actually representative of the typical dog or cat that PETA puts down?

The One Green Planet article argues that the number of animals PETA euthanized in 2020 — 1,763 — is “roughly 7%” of “the more than 26,000 animals PETA’s fieldworkers helped in 2020.” But PETA doesn’t really explain what goes into the category of “helped” animals, and “helped” animals is not the relevant comparison to begin with. The relevant point of comparison is the fact that PETA took in 2,650 animals in 2020 and euthanized 67% of them (1,763). Was every single animal that PETA killed hopelessly ill or absolutely unadoptable? PETA doesn’t say. Nor does PETA offer any real explanation for why its euthanasia rate drastically outstrips the rates of other pubic shelters in Virginia, many of which are “open admission” just as PETA claims to be.

Interestingly enough, a recent Newsweek article fact-checked the proposition, advanced in a number of tweets, that PETA is responsible for the deaths of thousands of animals. Newsweek’s ruling, after analysis of the VDACS statistics: “Mostly True.”

If, as the One Green Planet article asserts, PETA has “nothing to hide,” then PETA should forthrightly state whether each and every one of the 1,763 animals that it euthanized in 2020 was either beyond medical attention and suffering unnecessaily or was unadoptable. If that is the case, then surely PETA can say it. If that is not the case, then PETA should explain why this is not “needless killing” which PETA claims to be against.