I. Quick Overview of Third Distribution in China

“Third distribution” is a local Chinese concept referring third distribution under the conditions of market economy, which was first proposed by famous economist Mr. Li Yining in 1994.

The first distribution is conducted by the market according to the principle of efficiency, which refers to the private interests obtained by enterprises and individuals in market economic activities. The second distribution, i.e., government-driven distribution, is carried out by the government within the scope of its functions to solve social problems with due consideration given to equity through methods including taxation, poverty relief and coordination of social security. Third distribution—social responsibilities driven distribution—is a secondary distribution through personal income transfer and non-compulsory methods such as individual voluntary contribution (e.g. pro bono activities) and donation. As a social voluntary mechanism, third distribution is characterized by the dominant role played by the private sector and social responsibility.

In November 2021, the Resolution of the Central Committee of the Communist Party of China on the Major Achievements and Historical Experience of the Party over the Past Century was adopted at the Sixth Plenary Session of the 19th Central Committee of the Communist Party of China. At the subsequent press conference, the spokesman expressed that there are many channels and ways for entrepreneurs to contribute to common prosperity. China encourages and supports the active participation of enterprises and entrepreneurs in public welfare and charity activities within their capabilities on a voluntary basis, which objectively also serves the function of third distribution.

Enterprises and entrepreneurs can participate in third distribution through many channels and ways. For instance, in addition to the most basic compliance operations, there are also diversified ways of active participation in public welfare charity. Not just a distribution of social welfare—it is more importantly a major channel for enterprises driven by their social responsibilities to promote joint construction of the society as a key part of social activities.

Besides the concept of third distribution to FDI Ventures in China, this article also intends to introduce the basic paths for enterprises or entrepreneurs to participate in China’s public welfare and charity sector for readers’ reference.

Due to the complexity of miscellaneous technical terms and a lack of systematicness of relevant laws, polices and regulations, in many cases even the practitioners of China’s public welfare charity industry fail to fully understand the legal status of their own organizations and relevant legal concepts. For foreign enterprises in China, often the key priority of developing overseas business is to ensure full compliance operations.

With the development of world trade and economic globalization, the rules of commercial laws of various countries are tending to converge. Nevertheless, considerable divergencies still exist in the field of public welfare charity industry due to the involvement of different political and social systems. For FDI Ventures in China who are willing to participate in China’s public welfare charity, the first thing they need to know are the basic concepts in China’s laws, regulations and policies, especially the form of organization to patriciate.

Corresponding to the concept of NGO in China, International NGO (INGO) refers to international non-governmental organizations conducting activities within the territory of China, i.e., translational or cross-border activities.

The Law of the People’s Republic of China on the Administration of Activities of International Non-Governmental Organizations within the Territory of China （PRC INGO Law） (April 2016) endows INGOs with legal status in the form of law and provides unified regulations on their activities within the territory of China, thereby constituting a uniform legal basis for INGO to conduct activities in China.

INGOs have the following characteristics:

Second, they are non-profit social organizations. In other words, their profits and property shall not be distributed among contributors.

Third, they are non-governmental social organizations, meaning that their establishment and policy making are not controlled by the government.

In a non-exhaustive manner, this definition lists the three common forms of INGOs—foundations, social groups and think-tanks.

Chinese non-profit organizations mainly take the forms of social organizations and public institutions. To be more specific, social organizations include foundations, social service agencies (also known as private non-enterprise entities) and social groups, all of which can accept domestic and overseas donations for conducting activities in compliance with their respective business scope and purpose.

Foundations should be initiated with willing donations by natural persons, legal persons, or other organizations. Based on the principle of gratuitousness of public welfare donations, the initiator who established the foundation shall not claim rights from their invested property on the grounds of their contributions. A foundation is a donation-based legal person according to the Civil Code of the People’s Republic of China, which is equivalent to the “incorporated foundation” in the traditional civil law. The Chinese law requires certain minimum amount of the starting fund of a foundation. At present, the minimum amount of starting fund required for establishing a foundation is RMB 2 million. In China, foreign invested enterprises can also initiate and establish foundations. Below are examples of existing foundations established by foreign enterprises in China: 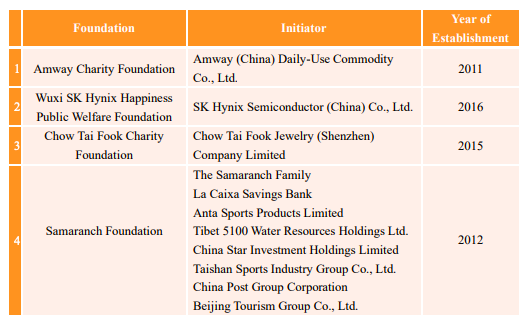 By establishing its own corporate foundation, an enterprise can better implement its ideas of social value co-creation in the fulfillment of social responsibilities. 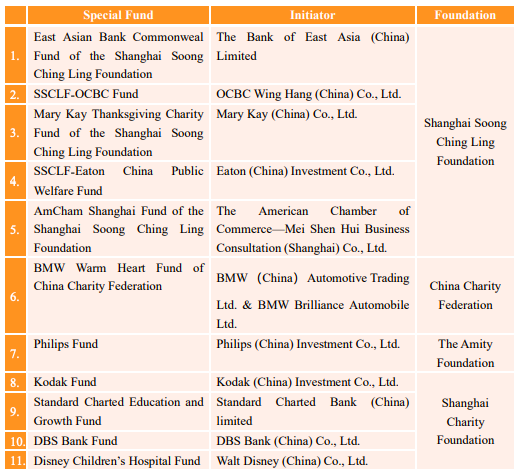 What are the rights and responsibilities of foreign invested enterprises as initiators of social organizations such as foundations? The answer is given below with foundation as an example.

Besides financial support, foreign invested enterprises can also cooperate with foundations in the field of public welfare charity, e.g., the common approach to cooperation “cause-related marketing” (see article (III) of this series), and offering staff and clients volunteer service opportunities via public welfare and charity activities of the foundation. Through resource sharing, foundations can promote their own growth and development while satisfying the demand of foreign invested enterprises for in-depth participation in China’s public welfare charity and undertaking corporate social responsibilities.

III. Paths to Participation for FDI Ventures in China

At present, there are already quite a few practical cases of foreign invested enterprises initiating and establishing non-profit organizations in China. Below is an overview of common patterns for FDI Ventures to participate in public welfare practice within the territory of China: 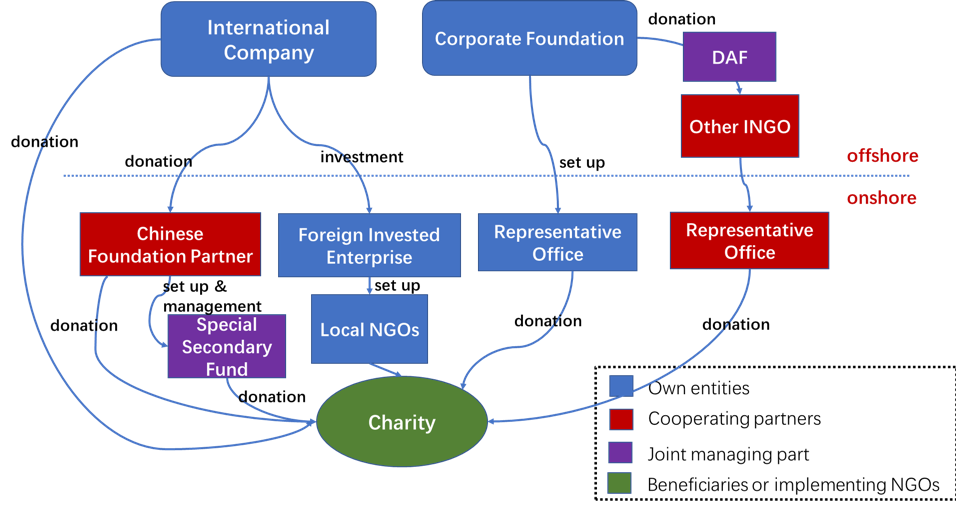 How we can help

The FUGUAN Law Firm (FUGUAN) is a social enterprise law firm in China and the first law firm in China to be B Corp certified. FUGUAN focuses on providing legal services in the field of non-profit law, including domestic non-profit organizations (such as foundations, private NGOs and social groups), International NGOs, philanthropists, social impact investment and corporate charities/social responsibility activities.

Based on due diligence investigation of your business goals, demands and objective conditions, we will make a detailed comparison and analysis of various potential paths in terms of their advantages and disadvantages on dimensions including function, establishment cost and compliance cost, to help you find out the optimal path from a variety of forms and combinations including foundations, social service agencies, social groups, special funds and social enterprises.

According to the path chosen by you, we will focus on analyzing the prerequisite and procedures for implementation, and provide a summary list of compliance issues that need your attention and the corresponding suggestions based on practical cases.

In accordance with the optimal path implementation plan, we will assist you with the completion of various tasks, including but not limited to: preparation of documents required for the establishment of foundations, representative offices and special funds, communication with relevant competent departments, and answering of legal questions in the process of implementation.