From 1 January 2021 a new regime will apply to medical devices placed on the market in the UK. New medical device regulations for the UK were published in 2019.

Those regulations essentially copy and paste the MDR and IVDR into UK law, albeit that this would be as a parallel system to that in the EU, unless mutual recognition is agreed. However new guidance from the MHRA suggests that these regulations might be repealed and replaced by an entirely new regulatory regime unique to the UK. A consultation in "autumn" is promised, but time is running short.

Medical device manufacturers who have CE marked devices (whether under the EU directives or the EU regulations) will be able to continue to place them on the market in the whole of the UK until 1 July 2023 without a change in labelling. After that, devices destined for Great Britain will be required to follow the UK regulatory regime and to be labelled with the UKCA mark. Northern Ireland will, however, continue to accept CE marked devices.

Even if using the CE mark in the UK after 1 January 2021, there are some additional hurdles for manufacturers.

The first hurdle is that manufacturers who are based outside the UK, whether in the EU, the EEA or elsewhere, will need to appoint a UK Responsible Person (UKRP). The UKRP will take on regulatory responsibilities with respect to the MHRA and users or customers in the UK which include:

The second hurdle to overcome to allow devices to be placed on the market in the UK after 1 January 2021 (even for CE marked devices), is registration. A UK manufacturer must register with the MHRA, as must a UKRP for an overseas manufacturer. The registering entity will then register each of the devices for which they are responsible for placing on the market in the UK, whether in Great Britain or Northern Ireland.

The following grace periods (from 1 January 2021) apply to the requirements both to appoint a UKRP and to register the devices:

We assume that even if IVDs are placed on the UK market under the IVD Regulations (as opposed to the directive), that the grace period will be determined according to the classification set out in the directive.

However, for general medical devices that are up classified or newly regulated devices under MDR, it is not clear which rules would apply. Of course, the MDR will never be fully applicable in the UK, but we assume that the classification under MDR would only be applied from 26 May 2021, unless the new UK legislation says otherwise.

Manufacturers who are not supplying the EU/EEA markets might prefer the UK regulatory system to the EU's. Additionally, all device manufacturers will need to start to transition to the UK system in advance of the deadline of 30 June 2023. We have very little information on that new system except for the following:

UK Manufacturers supplying in the EU/EEA

Vigilance reporting will continue to be made to the MHRA for the whole of the UK, and the MHRA will continue to be the enforcement authority for the UK. The MHRA will not though be able to challenge certifications, decisions or authorisations emanating from EEA regulatory bodies, whether notified bodies or competent authorities in relation to devices placed on the market in Northern Ireland.

For a summary of the requirements by location of manufacturer and where the device is placed on the market, please see the table below. 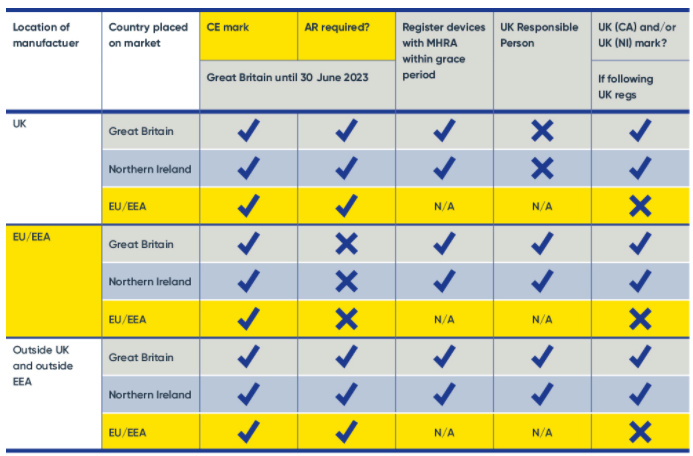