Years After Alice: Eligibility-Rejections Outflow from a Different Part of the USPTO

A concise set of statutes dictate the characteristics that a patent application must have to be allowed to grant as a patent. Patent examiners are tasked with reviewing individual applications to determine whether these requirements are met. For example, was the claimed invention new and would it have been non-obvious? And is the claimed invention eligible for patent protection? As is often the situation in law, the devil is in the details when evaluating these deceptively simple patentability standards. Thus, examiners are to use thousands of regulations and court cases to understand how to assess particular and unique applications in view of the requirements.

The patent-eligibility requirement (set forth in 35 U.S.C. § 101) has recently garnered much attention. It has long been established that inventions that are no more than an abstract idea do not meet this requirement.[1] While the Federal Circuit has attempted to establish rather clear tests for determining whether a claimed invention is abstract, the Supreme Court has resisted such approaches.[2]. In 2014, the Supreme Court again weighed in on the issue in Alice Corp. v. CLS Bank [3], holding that claims focused on an electronic escrow service were not substantially more than an abstract idea and that mere implementation of an abstract idea on a computer system was insufficient to find the claims patent eligible.

Examination at the USPTO changed quickly after Alice. Allowance rates plummeted, and patent-eligibility rejections skyrocketed.[4] However, curiously, these effects were largely contained within a particular segment of the hundreds of examining units (known as art units).[5] Specifically, the trends were selectively observable across “business-method” art units (art units 3621-29 and 3681-97). Business-method applications typically focus on software innovations, but they span a wide range of technologies (e.g., cryptography, anti-counterfeiting, fraud detection, medical software and electronic voting). Examination statistics corresponding to other computer-related and/or software-related art units (e.g., in the art units in Technology Center 2100, which is focused on “Computer Architecture and Software ") were nearly the same before and after Alice. Examples of technologies in Technology Center 2100 includes error and fault detection, generic control systems, artificial intelligence, structural design and modeling, and arithmetic processing and calculating.

To continue to track examination patterns, we updated our previous analysis to determine whether the examination discrepancy between the business-method art units and Technology Center 2100 remained. Specifically, we used data from LexisNexis® PatentAdvisorSM to associate each action issued by the USPTO between the third quarter of 2013 and the first quarter of 2018[6] to indicate: whether the action was an allowance or office action; whether the action included a rejection under 35 U.S.C. § 101, the art unit, and the date on which the action was issued. We then separated the actions based on calendar-year quarter. For each quarter, we aggregated data across the business-method art units and separately aggregated data across Technology Center 2100. We then calculated time-series statistics for each of the two data groups.

Figure 1 shows the percentage of office actions issued within the identified time periods that included a patent-eligibility rejection (under 35 U.S.C. § 101). The red lines represent data corresponding to the business-method art units. As we have previously reported, in these art units, the prevalence of patent-eligibility rejections skyrocketed after Alice (represented by the first vertical line). 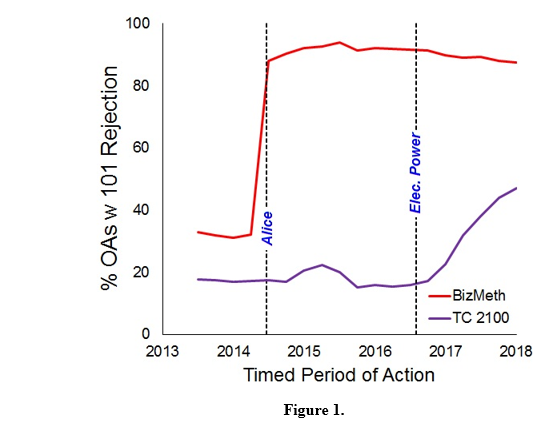 Astute readers will recognize that this change in eligibility-rejection issuance roughly coincides with a Federal Circuit decision pertaining to patent eligibility: Electric Power Group v. Alstom.[7] In this Decision, it was held that the claims were focused on collecting information, analyzing the information, and displaying results of the collection and analysis. The court held that this focus was abstract, the claims failed to amount to significantly more, and the claims were patent ineligible. The decision was issued on August 1, 2016 and is represented by the right vertical lines in Figure 1. 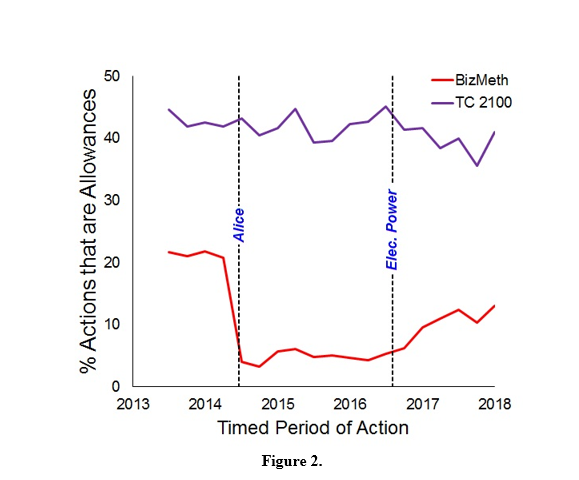 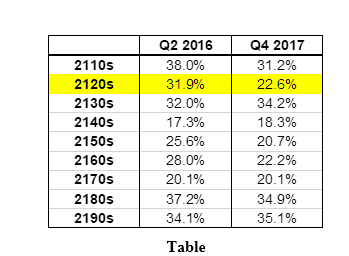 Thus, it appears as though the USPTO is taking careful note of the specific patent-classification context of the case law. Is that wise? How law is to be applied depends on the particular facts and circumstances at hand. In patent law, those particular facts are integrally intertwined with the technical innovation set forth in the patent application. Thus, whether an analysis set forth by a court should affect how a given patent application is examined will often have some dependence on a degree to which a type of technology at focus in a case corresponds to a type of technology set forth in the patent application.

The USPTO has already gone through extensive effort to develop a scheme for clustering applications that relate to similar types of technology into individual art units. The USPTO and applicants then have the benefit of having examiners with corresponding technical specializations examining the applications. Capitalizing on this art-unit structure to rapidly respond to new case law with targeted examination training provides efficiency and speed advantages.

However, art-unit classification is far from a precise science. Some art units correspond to a broad swath of technologies, and some art units in different technology centers relate to very similar technologies. Businesses prosper and the public benefits when government agencies act consistently and predictably. Thus, art units of patents at issue in court cases may provide a good starting point when identifying which examiners to train on new examination techniques. But it is important that a higher-level assessment also be conducted, such that training is not performed in piece-meal and such that patent examination improves in its predictability and consistency.