Misleading Ads are Not a Jeweler's Best Friend: The FTC's Crackdown on Diamond Ads 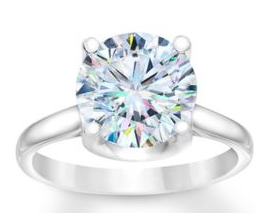 It’s been 70 years since Carol Channing first sang “Diamonds Are a Girl’s Best Friend” on Broadway, with Marilyn Monroe singing the more famous rendition four years later on the silver screen. Around the same time as Monroe’s performance, a research group under the direction of General Electric created the first commercially successful synthetic diamond. Fast forward several decades and there are now several methods by which “lab-created diamonds” or “synthetic diamonds,” as they are called in the industry, can be produced.

As often happens with manufactured products over time, the lab development process improved significantly, and lab-created diamonds became increasingly competitive to their mined counterparts. Nevertheless, lab-created diamonds, which sell at roughly 30–40% less than mined diamonds, have not fully penetrated the diamond market and many consumers still care about the distinction between lab-created versus mined stones. With this in mind, there is a danger that, with certain uncandid advertising practices, a buyer could be misled into paying a higher price for a lower-valued item - i.e., paying mined diamond prices for lab-created diamonds.

To prevent consumers from being misled, the Federal Trade Commission (FTC) issued revised Jewelry Guides in July 2018 on how jewelers can describe their products in advertisements. The goal was to help jewelers avoid deceptive advertising of diamonds, gemstones, precious metals, pewter, and pearls. The guidelines include directives on how to properly advertise lab-created diamonds and simulated diamonds (or “simulants”) which are stones, such as cubic zirconia, that visually resemble diamonds but are chemically distinguishable, and exponentially cheaper, than a true diamond.

The guidelines suggest use of the word “imitation” or “simulated” immediately preceding the name of the target gemstone when the product is a simulant (e.g., “simulated diamond”). For a product to be described as “cultured” or “laboratory-created,” it must have the same optical, physical, and chemical properties as the target gemstone (e.g., a “cultured diamond” or “lab-created diamond” must have all the same properties as a mined diamond). 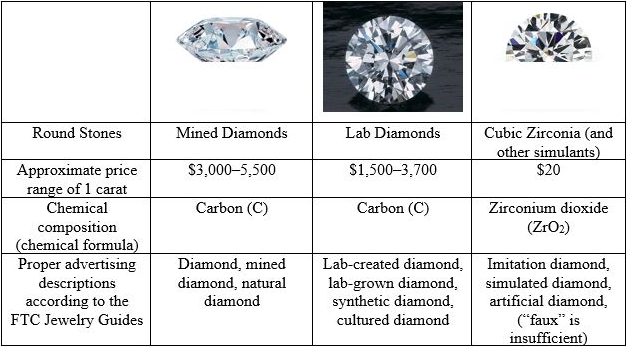 The FTC has begun to enforce the guidelines against jewelers who do not comply with them. In early 2019, the FTC sent letters to eight jewelry marketers warning that some of their online advertisements may deceive customers. The ads that triggered the letters had been placed on social media—Facebook, Instagram, Twitter, YouTube, and other sites. Some ads hinted that their “diamonds” were mined when they were actually lab-created, or that a simulant was either a mined or lab-created diamond.

The FTC did not release the names of the marketers to the public, but did release redacted copies of their letters[C1] [B2] . According to the letters, it is not enough for marketers to disclose elsewhere on their websites that their diamonds are lab-created or simulants. Similarly, it is not sufficient to communicate this information in the company name (e.g. a company name that includes the phrase SIMULATED DIAMONDS or LAB MADE DIAMONDS does not provide sufficient notice). Rather, this information should be put on each individual product description in a way that “clearly and conspicuously” identifies when precious stones are lab-created or simulants. The appropriate qualifier must immediately precede the name of the stone (e.g., “laboratory-grown diamond”). Notably, the FTC warning letters suggest that marketers will not get a pass for using hashtags such as #labgrowndiamonds—even in today’s social media age.

The letters also address claims touting the purported environmental benefits of choosing a lab created or simulated diamond over a mined one, with terms such as “eco-friendly” or “sustainable”. The letters point to the FTC’s separate “Green Guides” which provide guidance regarding “environmental marketing” claims and remind marketers that use of terms such as “eco‑friendly” and “sustainable” must have a reasonable basis.

While the warning letters do not impose penalties, failure to comply can result in the FTC bringing enforcement actions that can yield fines of up to $42,530 per violation under Section 5 of the FTC Act. That’s the approximate equivalent of a 4 carat (mined) diamond! Consumers like to get the best deals, particularly for jewelry where costs can vary widely from one source to another. But it is important for jewelers to be clear about why some stones cost much less than others. Failure to properly communicate such information to the consumer could cost a jeweler its reputation, yield unnecessary penalties, and ultimately result in lost revenues.