China’s National Intellectual Property Strategy Outline promulgated in 2008 proposed "to improve the trial system for intellectual property and optimize the allocation of judicial resources". Driven by this vision, China has been exploring the specialization of adjudication for IP rights in the past decade.

By the end of 2014, three specialized IP courts were formed in Beijing, Shanghai, and Guangzhou – the leading metropolises of the country. From 2017, eighteen specialized IP tribunals were successively set up. In October 2018, the Standing Committee of the People’s National Congress approved the Pilot Program of the Supreme People's Court on the establishment of an IP-specialized (appellate) tribunal which will begin operation on January 1, 2019 to hear appeals in civil and administrative cases of technology-related intellectual property disputes nationwide. At this point, a system of specialized IP adjudication is put in place.

Responding to the call of specialization, these IP courts and tribunals have centralized and exclusive jurisdiction over technology-related IP matters highly technical and complex.

A specialized IP court usually has 20-30 judges and a specialized regional IP tribunal has 12 to 15. The majority of the judges have a graduate degree or above, some came from a mixed background of law and technology, some majored in intellectual property during college years, and quite a few of the judges have more than 10 years of IP trial experience.

It is also worth noting that the Beijing, Shanghai, and Guangzhou Intellectual Property Courts and the IP tribunal of the Supreme People’s Court only adjudicate civil and administrative IP cases but not criminal cases, whereas the specialized regional IP tribunals adopt the "three-in-one adjudication" mode, that is, they have integrated jurisdiction over civil, administrative and criminal IP cases.

Moreover, it is proposed in the Opinions on Several Issues on the Reform and Innovation in the Field of Intellectual Property Adjudication promulgated in early 2018 that the juridical system will continue to "explore the mechanism of long-distance adjudication under cross-regional IP jurisdiction" and "fully integrate the advanced judicial resources of courts in Beijing Municipality, Tianjin Municipality, and Hebei Province and explore to give Beijing Intellectual Property Court centralized jurisdiction over technology-related IP cases in these places”, which indicates that the Beijing Intellectual Property Court is likely to obtain cross-provincial jurisdiction in the future. 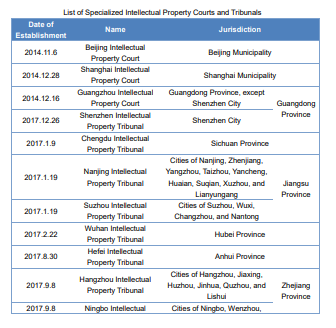 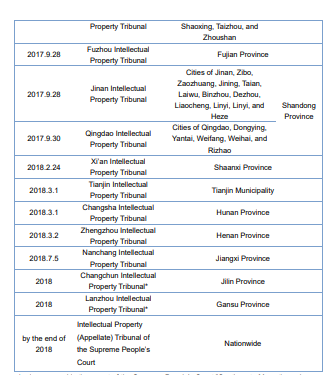 *only appeared in the report of the Supreme People's Court ”Continue to Move through the Innovation Road - a summary of the intellectual property trial work of the people's courts since the Reform and Opening-up” published in December 2018.

Specialized IP adjudication organs, especially the IP Courts, have successfully launched a number of exploratory and pilot measures and obtained valuable experiences for the judicial reform regarding intellectual property protection.

One of the significant progresses is the increase of compensation awarded in IPR infringement case. The specialized IP Courts are trying to order or support compensation more comparable to the value of the IPRs and establish new mechanisms involving third party appraisal organizations, clarifying burden of proof, introducing new elements into the compensation.

By introducing diversified technical fact-finding mechanisms with the help of technical assistance, judicial authentication, and expert consultation, the specialized IP Courts sought for ways to improve effectiveness of technical investigation and ensure the neutrality, objectivity and scientific reliability in the process. Statistics showed the three IP Courts employed 61 technical investigators; they provided opinions in over 1000 cases in the first three year since the establishment of the specialize IP Courts; and the number has grown quickly in 2018, where 448 cases tried by the Guangzhou Intellectual Property Court alone involve technical investigators.

The specialized IP Courts further pursued to increase the convenience of temporary remedy for a party whose right has been infringed. They executed preliminary injunctions and preservations on properties, activities and evidence. By the end of 2017, the three IP Courts had ruled to support 638 injunction and preservation cases of various kinds, including 79 pre-litigation and 559 during litigation.

The specialized IP Courts also worked hard to enhance productivity and efficiency by centralizing the trials, streamlining the procedures, and simplifying certain documents. At present, the average adjudication time of a case tried by the Guangzhou Intellectual Property Court is less than 50 days, and the average time for simple patent cases of first-instance has been reduced to 3 to 4 months. The average adjudication time of foreign-related IP cases handled by the Beijing Intellectual Property Court is 4 months, while that in major European countries is about 18 months. The Shanghai Intellectual Property Court further explored diversified mechanisms for dispute resolution to greatly shorten the duration of a case and signed cooperation agreements with 13 mediation organizations and industrial associations. It also expanded the pre-trial mediation to a boarder scope. As a result, it has successfully concluded 85 cases before trial, accounting for 29.2% of cases which entered into mediation.

This article was first published on IPLink-Asia.