On December 28, 2018, Nirvana LLC filed a lawsuit against designer Marc Jacobs in the Central District of California, alleging copyright and trademark infringement. Nirvana LLC is the legal entity which controls the band Nirvana’s financial, legal, and business affairs. Nirvana LLC was formed in September 1997 by the band’s two surviving members, Dave Grohl and Krist Novoselic, along with the Cobain Estate, controlled by Courtney Love. The lawsuit was triggered by Jacobs’ new “Bootleg Redux Grunge” Collection, and alleges infringement of Nirvana’s satirical smiley face design, created by Nirvana front man Kurt Cobain in 1991. The design was first introduced in 1992, and has since been licensed for use on numerous items, often appearing in yellow against a black background. 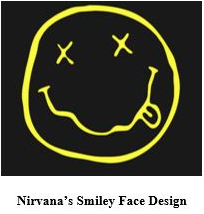 This is not the first time Nirvana has made headlines due to legal disputes. After Cobain’s passing, Love was publicly at odds with Grohl and Novoselic for nearly two decades. Love sued the band members in 2001 to dissolve Nirvana LLC and gain control over the band’s affairs. The band members countersued in an attempt to remove Love from the LLC. Love, Grohl, and Novoselic appear to have put their differences aside and now collaborate to protect the Nirvana legacy.

In its complaint, Nirvana alleges that Jacobs’ “Bootleg Redux Grunge” collection features designs bearing a resemblance to the infamous Nirvana smiley face design. Nirvana further alleges that unlike the authorized Nirvana clothing found at retailers such as Hot Topic, Target, and Urban Outfitters, the items available from Jacobs’ collection are not licensed by Nirvana.

In addition to its music royalties, Nirvana has earned a steady revenue stream from licensing merchandise. In its complaint, Nirvana claims to have used the smiley design continuously since 1992 to identify its music and licensed merchandise. The first use of the design appeared on a poster advertising the release party for Nirvana’s Nevermind album. Since then, it has been licensed for use “on literally dozens of different t-shirt, shirts, hats, hoodies, bags, backpacks, glasses, wallets, and other items of merchandise.” To support the claim that the two designs are substantially similar, Nirvana provided the following visual comparison of their licensed merchandise and pieces from the Jacobs’ collection. 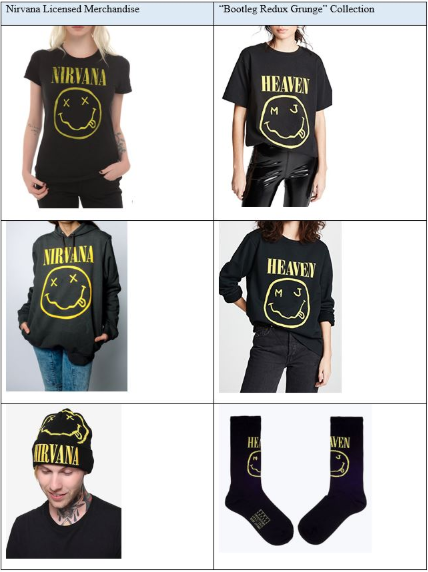 Nirvana’s complaint further alleges that due to the extensive use of their design on licensed merchandise, the design has come “to symbolize the goodwill associated with Nirvana,” and has given rise to both copyright and trademark rights because consumers viewing goods that bear the smiley face will assume those goods are endorsed by or associated with Nirvana. Additionally, Jacobs’ use of his design is claimed by Nirvana to be “part of a wider campaign” by Jacobs to “evoke Nirvana in the minds of [consumers]” and associate the entire collection with “one of the founders of the ‘Grunge’ musical genre, so as to make the ‘Grunge’ association with the collection more authentic.”

Unlicensed use of a band’s trademark or copyrighted work on merchandise can be financially detrimental and substantial, especially for a dissolved band like Nirvana that no longer performs live or composes new music. Even for active bands that continue to tour and release new records, merchandise licensing can be a significant percentage of their income. According to Bob McLynn, the manager for rock band Panic! At the Disco, 30% of the profits earned from the band’s most recent tour were attributable to the sale of merchandise.[i]

A recent global licensing survey released by the Licensing Industry Merchandisers Association (“LIMA”) found that in 2016, international music merchandise sales hit $3.1 billion total, a near 10% increase from the previous year.[ii] Music has become an increasingly digital experience for consumers, and musicians are recognizing that fans desire something physical to connect themselves with the music they love. Bands have been largely addressing this market through additional merchandising. For example, three years ago rock band Fall Out Boy opened a pop-up shop in New York dedicated to selling the band’s merchandise, to great success. Rap musicians Kanye West and Drake have followed suit, opening pop-up shops of their own that have been reported to earn $1 million in revenue.[iii]

This lawsuit comes over 25 years after Jacobs showcased his original Grunge collection in 1993. The original collection was not well-received by the general public, and was rumored to have cost Jacobs his position at design house Perry Ellis. The original collection was likewise not well-received by Cobain and Love, according to some reports. Love was quoted in an interview with Women’s Wear Daily as stating that “Marc [Jacobs] sent [Love] and Kurt [Cobain] his Perry Ellis grunge collection” and their response was to burn it because “[they] didn’t like that kind of thing.” This previous history or any number of unknown factors might have placed “Something in the Way” of the parties from otherwise reaching an amenable agreement, leading to the present lawsuit.

As of publication, Marc Jacobs has not filed an Answer and the “Bootleg Redux Grunge” collection items are still offered for sale on the websites of Marc Jacobs, Nordstrom, Neiman Marcus, and other retailers.