Brazilian company Natura continues to shake things up with a bid to buy Avon in a deal valued at $2 billion. If completed, the deal would make it the world’s fourth-largest beauty company. The purchase is still subject to regulatory approval, but this all-stock acquisition is expected to be finalised by the beginning of 2020. This is not the Brazilian company’s first big-ticket purchase, the organisation having acquired Aesop in 2013 and The Body Shop in 2017. In this week’s data analysis we take a deep dive into the mergers to show how these brands have complemented and bolstered Natura’s business, and diversified its offerings to engage with a wider consumer base.

Avon is Natura’s main rival in Latin America, with both companies employing direct sales techniques to attract clients. In fact, Natura attributes its success in countries like Brazil and Argentina to its relationship sales approach. While shoppers in developed countries tend more towards high-end retail, the graph below shows that consumers in Latin America much prefer direct selling. Building consultant resources is therefore a canny strategic move for Natura, especially considering that Latin America is its most profitable region.

While this purchase indicates that Natura is consolidating the Latin American market, it has not limited itself to this region, nor has it limited itself to a consultant-led business model. Both of its prior purchases, Aesop and The Body Shop, have strikingly different approaches for consumer engagement, relying more on traditional brick-and-mortars. Natura itself only has 45 stores in about eight countries, whereas Aesop has 227 signature stores and The Body Shop has 3,000 locations worldwide. Although the Brazilian company has seen success domestically with its direct selling, Natura understands that different consumers have different needs, and uses its new brands to see to this.

E-commerce is a big discussion point in the retail industry, with many seeing online platforms as the future of shopping. Natura has not overlooked these capabilities, introducing an online sales channel called the Natura Network. Further, Aesop pushed forward its presence in China by selling its products on a local e-commerce platform, Tmall Global. Although there is no doubt that online platforms are growing in importance in every industry, a study by Nielsen shows that not every beauty brand is suited to the online environment (see graph below). The top 20 cosmetic brands capture 90% of the money going to brick-and-mortar stores, but these same companies only capture 14% of the online share. This means that larger brands are more likely to see success through traditional selling methods, and it is actually only the small new-age brands which have the most success through online channels. 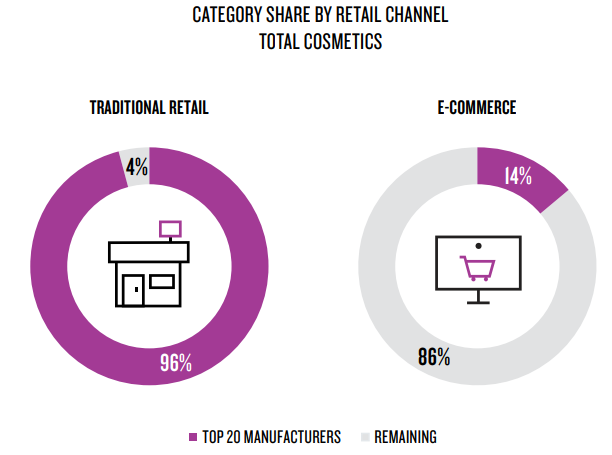 Source: The Future of Beauty

Natura hedges its bets on Brazil

Brazil is both Avon’s and Natura’s largest markets, with a 16% and 31% market sharerespectively. There is high potential for profit to be made in the jurisdiction, but there are a number of risks associated such as challenging macro-economic conditions and lower consumer demand. These factors have taken a toll on Avon, which has seen declining revenues over the past decade, reporting $10 billion in 2008 down to $5.5 billion in 2018.

The company had separated from its North American business in 2016, focusing its efforts in Latin America – and Brazil more specifically. Although Avon’s latest annual report highlights the risk that “there can be no assurance that we will be able to improve revenue, margins and net income or to achieve profitable growth,” Natura sees this as an opportunity to use its resources and established name to reinforce its hold on the market. However, even Natura has lost some of its foothold over the years, with the brand reporting a decline in brand preference between 2016 and 2017, dropping from 31% to 21%. It still has a high amount of household penetration, with 46.89% of Brazilian households reporting it had purchased at least one of Natura’s products in the past year.

So just how important is Brazil? It is the fourth largest market in the cosmetics industry, valued at $32.1 billion in 2017 with strong growth potential. For Natura, this is no doubt the core of its business, accounting for 56.6% of the company’s net sales in 2017 (see graph below). 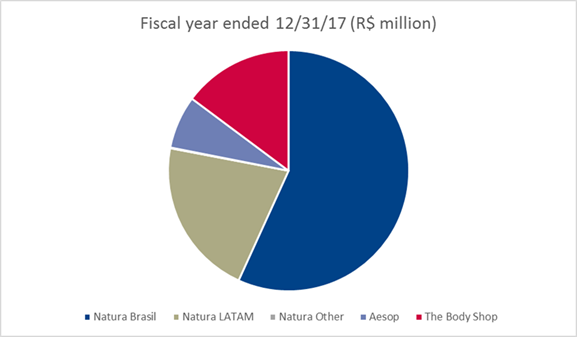 The geographic make-up of Natura’s business is reflected in its top five trademark registers (see table below). Its own operations are heavily biased to Latin America, but Aesop and The Body Shop are more internationally oriented. According to Natura’s 2018 annual report, the next steps for itself and Aesop are to further penetrate foreign markets. Currently Aesop is present in 25 countries, and The Body Shop has locations in 69. The latter sees 21% of its revenue from North America and 49% from Europe.

While Natura may have global ambitions for the future, it is leagues behind in trademark coverage compared to its major competitors (see graphs below). 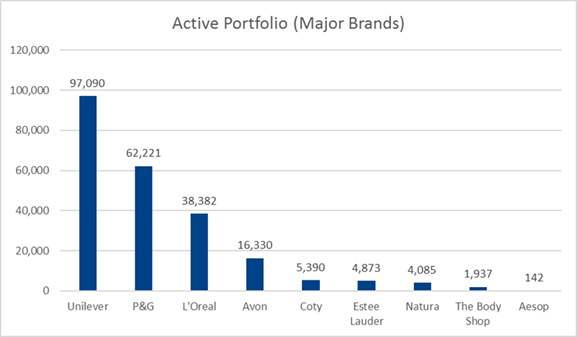 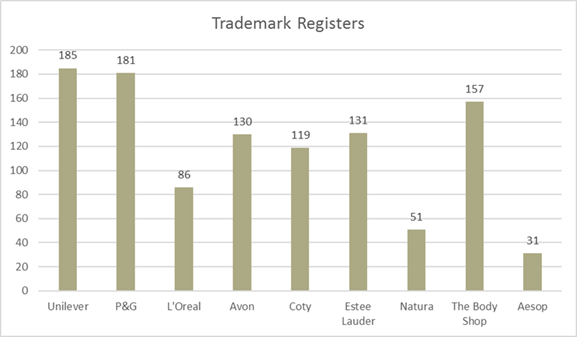 It may appear that L’Oréal only covers 86 registers, but this is because the missing registers are those which are members of the Madrid system and can therefore be covered by an international registration through WIPO. According to CompuMark’s director of custom and managed solutions, Robert Reading, L’Oréal is consistently a top filer of international registrations each year at WIPO, as well as being the top EU trademark filer in recent years. Overall, the European companies tend to utilise the Madrid system more frequently than American businesses.

The major brands also have a much wider geographic scope, as seen by their top five registers (see chart below).

Natura is ahead of the game

Natural beauty has quickly evolved over the years to change the landscape of the cosmetics industry. The natural and organic beauty market is projected to reach $22 billion in sales by 2024, based on an annual growth rate of 8-10% – a figure that the industry has maintained over the last few years. According to Nielsen’s report The Future of Beauty, the important things for brands to remember is that consumers are not just looking for products that are just marketed as ‘natural’ but also are genuinely free from harmful chemicals. In this respect, Natura is ahead of the curve. The Brazilian company advertises itself as an eco-friendly, sustainable business, and received its B Corp certification in 2014.

This certification was discussed at this year’s INTA conference in the Brand Meaning and Valuation in the Age of Millennial Consumerism session, as it is increasingly becoming a way for consumers to identify brands that are having a positive impact on the world and their communities. Natura in part received its ranking for being “conscious about well-being and sustainable development by cultivating better relationship within the community as well as with nature”. Its commitment to sustainable and ethical business reigns true with both Aesop and The Body Shop as well, with the latter being a strong advocate of ending animal testing.

Brand Finance analyst Crystal Hui crunched the numbers to put Natura’s 2019 brand value at $1,434 million, ranking 32nd in the Cosmetics 50 report. This was the third consecutive year that the Brazilian company rose through the rankings and in 2018 its value increased by 30.8%. In 2019 it also held its ranking at the third strongest cosmetic brand, falling slightly behind Neutrogena and Johnson’s. It’s subsidiary Aesop has a brand value of $280 million. Interestingly, The Body Shop had a brand value of $1,328 million in 2016 when it was owned by L’Oréal, but today it has dropped down to $272 million. It is common knowledge that Natura purchased the company at its peak, paying a steep €1 billion, but since this point the business has suffered from a crowded marketplace.

At this point, then, Natura is working to turn The Body Shop business around, and its strategic agenda includes “rejuvenation of the brand” as well as “enhancement of the omnichannel experience”, among other things. Hui comments: “It is particularly interesting that brand values for The Body Shop have taken such a dent post-acquisition by Natura. But we need to be mindful of the fact that this is that this is very much about brand fitting within business value. As an open market transaction, we are looking at the fair value here. Based on L’Oréal’s share price, how much revenue the Body Shop was making vs L’Oréal Group – the value sat at US$3bn. After acquisition in 2017, it was valued just under the rate paid by Natura which was US$1bn.”

As for Natura’s latest bid, Avon is valued currently at $966 million – and it will be interesting to see how that value changes should the deal complete next year.

While Natura might not have the same manpower as its direct competitors in the field, it does have the advantage of being a niche offering with a clear strategy, as well as being flexible with how it engages with consumers. If the Avon deal goes through, the Brazilian company will have further resources to expand its operation, all while maintaining its natural and sustainable approach which is one of the most important ongoing macro trends. Other players in the field should keep an eye out as expansion seems to be the name of the game, with Natura’s chairman announcing the intention to invest $5 million in new brands through venture capital funds.