Social media has spared none. With pandemic hitting the world, the nation has seen a surge in the usage of digital media platforms, wherein the content creators have been playing a pivotal role. To regulate the myriad of advertising and promotional content which circulates on various platforms like Instagram, YouTube, Twitter, etc., the Advertising Standards Council of India (“ASCI”) released draft guidelines for Influencer Advertising on Digital Media (“Guidelines”) in February 2021. These draft Guidelines were initially issued to seek feedback from all stakeholders – advertisers, agencies, influencers, and consumers. On 27th May 2021, ASCI released the final Guidelines which are to be complied with by all influencers from 14th June 2021 onwards. The main purpose of the Guidelines is to make sure that consumers are able to distinguish the promotional content which is being portrayed with an intention to influence consumer behaviour for an immediate or eventual commercial gain.

Overview of the Guidelines

As per the Guidelines, an influencer is defined as “someone having access to an audience and power to affect such audiences’ purchasing decisions or opinions about a product, service, brand, or experience, because of the influencer’s authority, knowledge, position, or relationship with their audience”. The Bombay High Court in the case of Marico Limited v. Abhijit Bhansali[1]has recognized 'social media influencers' as a budding category of individuals who have a large follower base and credibility in the social media space. The Guidelines also identify ‘virtual influencers’ as fictional computer generated ‘people’ or avatars. Lu Do Magalu and Barbie are a few examples of virtual influencers which are recognized worldwide. India also got its first virtual model in 2020, Nila – who has joined a growing list of digital influencers internationally.

We have noticed that various food, fashion, and travel influencers tend to caption their respective posts as “ad” or tend to put a headline which states “paid partnership”. Though the same was not a compulsion till today, it is now mandatory for influencers or their representatives to carry a disclosure label on their social media, which clearly identifies such posts as an advertisement. The Guidelines prescribe certain criteria which must be used to determine if such disclosure is required.

The Guidelines mandate that a disclosure is required if there is any material connection between the advertiser and the influencer. “material connection” refers to a connection which may affect the weight or credibility of the representation made by the influencer. Material connection could be in the form of monetary or other compensation, free products with or without any conditions attached including those received unsolicited, discounts, gifts, contest and sweepstakes entries, trips or hotel stays, media barters, coverage, awards or any family or employment relationship, etc. It is pertinent to note that material connection is not limited to monetary compensation. Going forward, whenever a celebrity promotes fashion brands like ‘Levis’ or a chocolate spread from ‘Epigamia’, he/she will have to ensure that the Guidelines are strictly adhered to, and that proper disclosure is made.

However, it is to be noted that no disclosure is required if there is no material connection and the influencer is merely giving his/her own opinion regarding a product/service they themselves bought. If a famous baker wishes to promote a specific brand of cocoa powder that he/she uses on daily basis and personally feels is a good buy, he/she certainly can recommend the same on good faith. However, if the same brand approaches the baker and asks him/her to promote the same product, and the brand in return promises to provide him/ her with discounts, he/she will have to ensure disclosure about the same being a promotion or an advertisement.

The disclosures required from influencers should be upfront and prominent so that it is not missed by an average consumer. If an advertisement is unaccompanied by a caption or a text, a disclosure in such advertisement (audio, video, and a live-stream) should be superimposed for the time period as mentioned below:

“Advertisement, Ad, Sponsored, Collaboration, Partnership, Employee, Free gift” are permitted labels under the Guidelines and the influencer could use any of these. The disclosure should be in English or in the language as the advertisement itself, in a way that is comprehendible for an average consumer to decipher. Additionally, it is the responsibility of the virtual influencer to inform its consumers that they are not interacting with a real human being. Since virtual influencers are digitally created by individuals, it can be deciphered that the obligations under these Guidelines are intended to be imposed on the organisation which controls the posts of such virtual influencer.

In a nutshell, following is a list of do’s and don’ts which influencers and brands should abide by while indulging on media platforms. 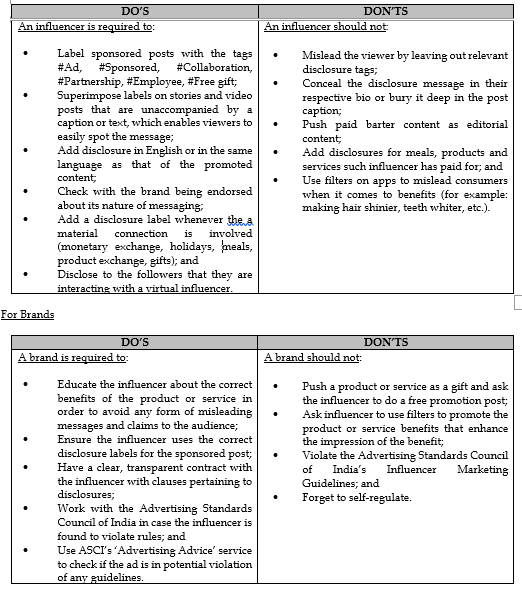 The Consumer Protection Act, 2019 (“COPRA”) has replaced the three-decade-old Consumer Protection Act, 1986, and has tried to address the challenges that digital media has imposed on consumers. COPRA has widened the definition of ‘consumer’ and now defines consumer as any person who buys goods, digitally or offline, via teleshopping, direct selling, or multi-level marketing. The earlier consumer protection act did not include e-commerce. It is pertinent to note that under Section 89 of the COPRA[1], the penalty for making misleading advertisements that are prejudicial to the consumers’ interest is imprisonment for a term extending up to two years and a fine, extending to ten lakh rupees. In case of a subsequent offence, such person shall be punished with imprisonment for a term that may extend to five years and a fine, extending to fifty lakh rupees. This provision is targeted to curb the misleading and false advertisement campaigns which run through social media influencers.

In addition to the Guidelines, ASCI aims to develop an inclusive educational approach to shape the narrative of influencer advertising. ASCI has also launched a platform -https://asci.social/ (“Platform”), which is an interactive platform with dos and don'ts, FAQs, information related to the Guidelines etc., which aims to assist the influencers and advertisers to adhere to the Guidelines.

In order to monitor potential violations of these Guidelines, ASCI has identified a French technology provider -“Reech” which would use artificial intelligence to identify lack of disclosure on posts of a commercial nature on social media[2].

Approach of other countries

In the United Arab Emirates (“UAE”), all advertising content must comply with the National Media Council's (“NMC”) Board's Resolution No. (26) of 2017 on Media Content. As per NMC, an influencer is any individual who has a form of influence or sway over specific industries or groups of people through their social and digital channels. Similar to the Guidelines, NMC also insists that influencers should include hashtags like “#ad” or “paid_ad” and that the same should not be accompanied with multiple hashtags that crowds the caption. The aim is to ensure that the audience must be able to understand that it is a sponsored post or an advertisement.

In the United Stated of America (“USA”), Federal Trade Commission (“FTC”) governs the endorsements made by influencers. FTC had released a document in the name of “Disclosures 101 for Social Media Influencers”. This document from FTC gives tips on when and how to make good disclosures and gives emphasis to the aspect of “material connection”.  Various other countries like Spain, Italy, Netherlands also have similar guidelines in place to keep in check the advertisements posted by the influencers.

Impact of the Guidelines

Ever wondered if a health fanatic cricketer would actually be munching on Too Yumm chips. In the advertisement, it is claimed that the chips are baked and not fried, however this claim was held only for three variants and not the other variants which were shown in the advertisement, thus leading to ambiguity, implication and exaggeration. There was also a stark contradiction between the claim, “Eat Lot and Fikar Not” and the disclaimer quoting “We promote responsible indulgence as a part of dietary requirement”. The visual of the celebrity when seen in conjunction with the claims are likely to mislead consumers regarding the product characteristics[3].

In a country like India, where the common people worship influencers and celebrities and follow them to the t, it is essential to have guidelines in place which help consumers understand and differentiate between a personal opinion and a commercial advertisement. While television sets are not a viable option for many, procuring cellular phones is cost effective, and with easy access to internet, the dynamics of how an influencer can “influence” someone’s life has changed manifold.

Digital marketing has gained immense popularity and brands worldwide are using it as a tool to attract consumers. With a boom in influencer marketing, these Guidelines are the need of the hour which will structure and set boundaries in the digital marketing space. These Guidelines certainly will be seen as a welcome change.