Coming Up in Singapore: New Copyright Exception for Text and Data Mining

The Singapore Copyright Act is undergoing a major overhaul. Following an extensive public consultation exercise which began in 2016, the proposed amendments were passed by Parliament on 13 September 2021 and are expected to be enacted into law in November 2021. Amongst the key changes is the introduction of a new exception to copyright infringement for use of works for text and data mining (TDM). This exception will significantly increase the availability of data for TDM, as well as training data for artificial intelligence (AI) programmes. This article discusses the scope of the exception and its limitations and conditions, and what these mean in practice.

Singapore - The (soon-to-be new) kid on the block Text and data mining (TDM) is generally defined as the automated analysis of large amounts of data to discover patterns, trends and other useful information.

Whilst and data do not enjoy copyright protection so that no copyright licence is required to use facts and data per se, the process of TDM may involve the doing of acts which are restricted by copyright. For instance, the making of copies of works for the purpose of extracting the relevant facts and data from the work. In the absence of an exception, the doing of these acts without the copyright owner’s authorisation could amount to infringement.

A number of jurisdictions have introduced specific exceptions for TDM in their copyright legislation, including Japan, and the United Kingdom and, most recently, the EU (as part of the Directive on Copyright in the Digital Single Market) (DSM Directive) with EU Member States being required to implement the rules into their national laws by early June 2021. Singapore will be the newest kid on the block when its TDM exception is introduced in November this year.

Current position – No specific TDM exception. Fair use to the rescue?

At present, there is no specific TDM exception in the Singapore Copyright Act (SCA).

In the United States, numerous courts have found that the reproduction of works in the creation of a database for TDM and the use of such a database to be non-infringing “fair use”. This is on the basis that the use is “transformative” and so is unlikely to have an adverse impact on the market for the original work.

Therefore, in the absence of a specific TDM exception in the SCA, there could be room to argue that use of copyrighted works for TDM constitutes “fair dealing”. That being said, the Singapore courts have yet to weigh in on this issue. Furthermore, whether any particular use qualifies as a “fair dealing” is highly fact-dependent and must be determined on a case-by-case basis.

A specific exception was therefore thought to be desirable to provide more certainty, given the increasing importance of TDM as a research tool for businesses and for AI application.

The features of the proposed exception are summarised below: 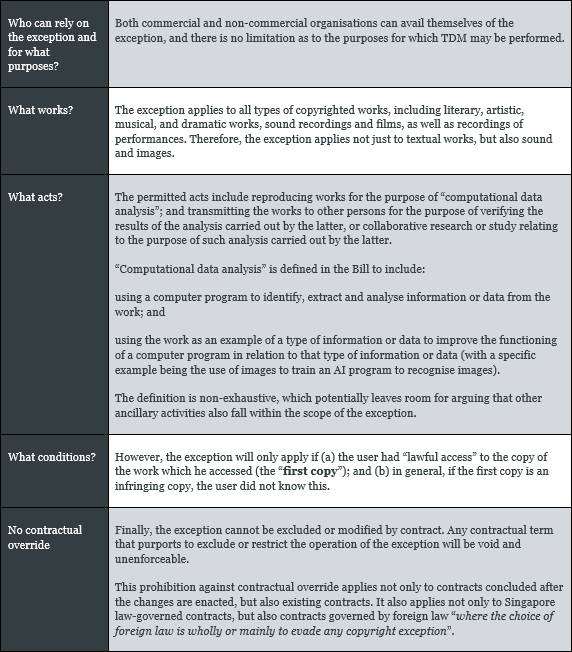 Notably, the TDM exceptions in the UK and under the EU DSM Directive mainly benefit non-commercial entities. In the UK, the exception permits the making of copies of works for non-commercial research only. Under the DSM Directive, the exception extends to commercial entities. However, where the user is not a research organisation or a cultural heritage institution, the copyright owner can opt-out by making appropriate provisions in the contract.

The Singapore approach - in extending the exception to both non-commercial and commercial organisations with no limitation as to the purposes for which the TDM is carried out (e.g., research), and disallowing contractual override in all cases, is much more permissive. This means that the exception will be of greater utility to businesses and will be able to significantly lower the cost of TDM research and AI development in Singapore, though the approach has understandably caused some concern.

The exact ambit of the exception is not entirely clear at the moment. For instance, the terms “lawful access” and “computational data analysis” are open to interpretation. Further, in relation to the prohibition against contractual override, it is unclear how it is to be determined that “the choice of foreign law is wholly or mainly to evade any copyright exception”. More clarity is expected when the exception has come into force and jurisprudence in this area is developed over time.

For now, below are some observations and practical tips based on the draft provisions: