Dispute resolution is the process of deciding a dispute or a conflict that has arisen between transacting parties. The decision can be arrived at either in an amicable manner or adversarial manner, either by the parties themselves or a neutral third party. The differences between the parties are addressed by dealing with their transaction-related interests.

Broadly, there are three methods of dispute resolution:

While the traditional dispute resolution method or litigation refers to the proceedings before an appropriate court of law according to the procedure established, the alternative methods are more flexible and party-centric and include negotiation, mediation, conciliation and arbitration. Hybrid-methods, as the name implies are a cross-over between two alternative methods of dispute resolution.

The need to evolve alternative mechanisms to reduce the burden of the Courts and provide speedy access to justice alongwith the revival and strengthening of traditional systems of dispute resolution prompted the introduction of ‘Section 89’ in the Code of Civil Procedure, 1908 and ultimately, the Arbitration and Conciliation Act, 1996. The former opened the passage of statutory reference to ADR, either by the Courts or the parties themselves.

Under the provisions of Section 89, CPC, reference for the resolution of disputes could be had to any one of the following:

In order to provide a better understanding of ADR, the two most popular forms, Arbitration and mediation are being elaborated herein:

It is an adjudicatory process in the nature of adversarial proceedings wherein parties submit their disputes to a neutral third party (arbitrator) for a decision. The proceedings, similar to litigation are however, faster, cheaper, confidential and more flexible in procedure and application of rules of evidence. The parties have the independence to chalk out the same in the agreement to arbitration. The said agreement which must necessarily precede arbitration, should be a valid one as per the Indian Contract Act, 1872. The parties to an arbitration agreement must have the capacity to enter into a contract in terms of Sections 11 and 12 of the said Act.

Arbitral decisions are final and binding on the parties with very limited scope of objecting to them.

It is a voluntary, disputant-centered, non-binding method of dispute resolution wherein a neutral and credible third party facilitates a settlement between the parties. It is a confidential and structured process where the mediator uses special communication, negotiation and social skills to assist the disputants in arriving at a mutually acceptable solution themselves. The parties thereto must be willing to iron out the creases in their relation by a little outside help as the focus in mediation is on the future. It is ideal where the emphasis of the parties is on building relationships, rather than ascertaining the party at fault for what has already transpired. The outcome of a successful mediation is a settlement agreement, and not a decision. The objective of mediation is not to evaluate guilt or innocence but to promote understanding, focus the parties on their interests, and encourage them to reach their own agreement.

For the ease of evaluation the following comparative table is provided: 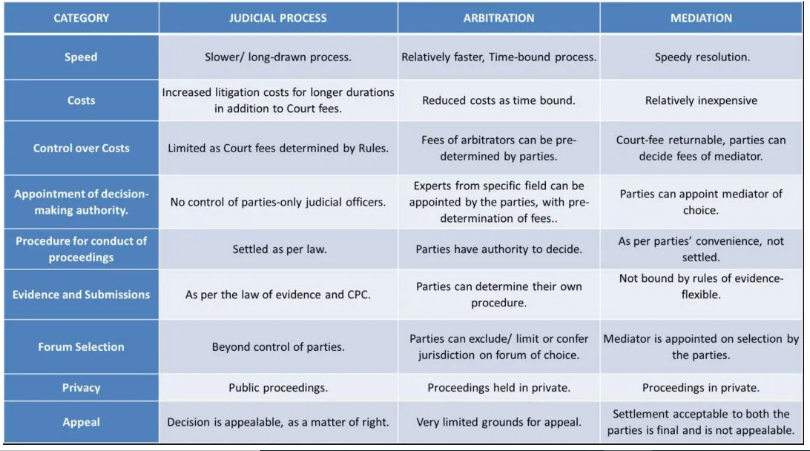