The ongoing problem with standards and patents

Industry standards are an important tool to ensure that consistent, compatible approaches are adopted by all participants in a particular field. For example, in industries such as electronics and telecommunications, there is a need to ensure interoperability and compatibility of products made by competing manufacturers. This improves competition between manufacturers, and increases the usefulness of products in the market.

Compliance with standards can be commercially desirable, and in some cases may be required by law. However, just because a certain technology is required by a standard, that does not mean it is free for anyone to use. A technology that is required by a standard may be the subject of a patent, or in some cases, numerous patents. A patent that is essential to the implementation of a standard is known as a standard essential patent (SEP). Where SEPs exist, complying with the standard could mean infringing someone else’s patent.

Standards are typically negotiated and adopted by Standard Setting Organisations (SSOs) composed of industry participants. In a strategy known as patent ambush, an industry participant may seek to ‘capture’ a standard by advocating for the incorporation of technology into that standard that is the subject of one of its own patents or patent applications, without disclosing the existence of these patents to other participants.

Dealing with SEPs and Patent Ambush

In order to address these issues, many SSOs now require industry participants to do two things:

There are numerous international, national and industry based SSOs around the world, and the specific obligations imposed regarding SEPs vary between SSOs. Depending on when the disclosure and licensing obligations arise, a participant might still advocate for the adoption of a patented technology, only to withdraw from the SSO before adoption of the standard in an attempt to avoid any obligation to disclose or licence its patents.

Even where a participant discloses its patent interests, and agrees to licence on FRAND terms, disputes can still arise over what constitutes FRAND terms.

SEP Litigation in the US and Europe

SEPs have increasingly become the subject of litigation and arbitration overseas, on FRAND royalty rates and licensing conditions.1 In determining royalty rates, courts seek to eliminate hold-up, whereby a patentee resists licencing its SEPs in the hope of imposing excessive royalties on implementers, and hold-out, whereby a prospective licensee implements a standard without licensing the relevant SEPs, in the hope of securing a sub-FRAND royalty rate from the patentee.

Whereas patent rights are granted territorially on a jurisdiction-by-jurisdiction basis, standards set by SSOs can relate to entire global product markets. In these circumstances, not only do SEP licensors hold equivalent patents in numerous jurisdictions, but companies implementing these standards sell their products in multiple jurisdictions. As a result, SEP licences are often negotiated on a worldwide basis. In fact, the High Court of England and Wales recently held in the context of a SEP licensing dispute that a UK-only licence would not be FRAND, instead ordering the grant of a worldwide licence.2

SEPs have received comparably little attention in Australia to date, both in relation to FRAND licensing obligations and patent ambush.3 Indeed, patent ambush is particularly pertinent in an Australian context, and is a phenomenon to which implementers of Australian standards should pay close attention.

As a country with a strong regulatory apparatus, Australia is often at the forefront of developing standards. Its standards can be more stringent than those of other countries. ISO standards are commonly amended to adopt the Australian standards.

A particular issue can arise where a company sits on the board of an Australian SSO, but not on the corresponding ISO board. In such a case, it may encourage the adoption of an Australian standard in which it has a patent interest. However, if that standard was subsequently adopted as an ISO standard, it would not be under any obligation under the ISO policy to disclose or licence its patents in relation to that ISO standard.

Despite the work that has been done to date to avoid patent ambush, and create clarity and certainty for users of standards, there is still some way to go to fully address these issues. 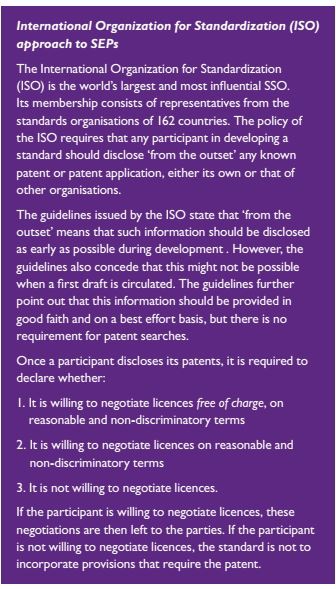