UDRP: the CIIDRC is operational and there are already great decisions!

By resolution of May 3, 2019, the Board of Directors of the Internet Corporation for Assigned Domain Names (ICANN) approved the Canadian International Internet Dispute Resolution Center (CIIDRC, CIIDRC.org), a branch of British Columbia International Commercial Arbitration Center (bcicac.com), as a domain name dispute resolution institution (icann.org, 2019-03-19). It is worth reviving that the BCICAC has been handling disputes relating to Canadian domain names (.CA) since 2002 (bcicac.com).

The CIIDRC joined the group of ICANN accredited institutions to administer the UDRP procedures:

The CIIDRC is now operational. Its additional rules are published (CIIDRC.org), as well as its list of panelists (CIIDRC.org) and even some drafting tips (CIIDRC.org, February 18, 2020; CIIDRC.org, September 6, 2019). As for the applicable fees, the center has adopted the following ones:

To date, this brand new institution has administered four cases which have resulted in three decisions, the fourth case having been settled by the parties. Among the three decisions rendered, one was decided by a commission of three panelists and the two others by a sole panelist. Finally, two complaints were dismissed, and one accepted. 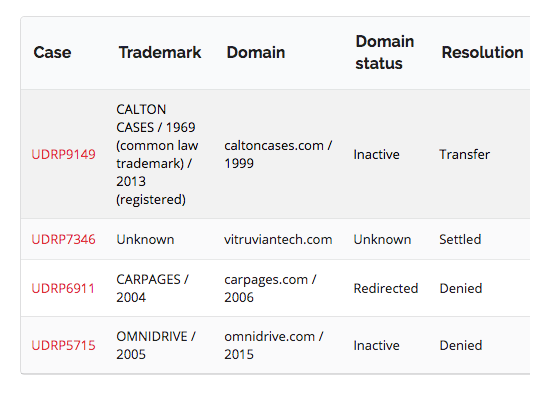 In the UDRP-9149 case (CIIDRC, UDRP-9149, Jeffrey Edwin Poss v. Jim Laffoley, March 17 2020), the complainant, Calton Cases (a manufacturer of cases for musical instruments) was able to obtain the transfer of the caltoncases.com domain name which was registered in 1999! Such a long wait is relatively rare, but similar cases were terminated last year, including stevejobs.com (iptwins.com, 2019-12-19) and pabloescobar.com (iptwins.com, 2019-10-16). In the same vein, the domain name mandela.org, which had been registered in 2000, was transferred in 2019 (iptwins.com, 2019-07-27). In the CIIDRC UDRP-9149 case, Calton Cases did not register the CALTON CASES trademark until 2013, but the company could rely on a common law trademark since 1969. The facts are as atypical as interesting. In summary, A sold Calton Cases to B. For financial reasons, B did not honor its commitments. Despite everything, B registered the domain name caltoncases.com and, since then, successive owners and the current owner of Calton Cases have been unable to contact him. At the dawn of a marketing operation for a small company such as Calton Cases, it was helpful to obtain the transfer of the domain name caltoncases.com:

“We are a small company and rely on internet traffic to acquire new orders for our product. We are beginning a new marketing program in an effort to increase our business. We deeply desire to retain our old domain name before we invest resources to our marketing. I hope tout you will consider our plea”.

Unmistakably, this is not sufficient to meet the requirements of the UDRP. However, it is not in vain to recall that, under certain circumstances, a good domain name can contribute, to a certain extent, to the continuation or the growth of small or medium-sized enterprises. More technically, the panelist indicated that the respondent had never used the domain name and, in general, there was nothing to ensure that the respondent had any legitimate right or interest in this domain name. The real difficulty lay in proof of the respondent’s bad faith on the day of registration. Given that the respondent became the owner of the company, he could legitimately, in good faith, consider that he had a legal basis to register the domain name caltoncases.com (provided that the registration occurred after the signing of the acquisition agreement). However, as the panelist pointed out, good faith disappeared at the same time as he breached the contract:

“Clearly, in the present case, the only reason the Respondent was able to register the domain name is that he was operating under cover of an agreement to acquire his interest in Calton Cases, an agreement on which he defaulted as it must be assumed that he was obliged to live up the contract and pay what he was obliged to pay and not to default on that agreement. Moreover, according to the Complainants evidence this was followed by a court decision against the Respondent in the Canadian courts and the apparent authorized renewal of the registration.”

Referring, by analogy, to WIPO decisions D2001-0373 (WIPO.int) and D2008-1492 (WIPO.int), the panelist came to the conclusion that the respondent had registered the disputed domain name in bad faith.

As for proof of bad faith relating to the use of the domain name, the panelist adopted the following reasoning:

“Likewise the above facts show that the domain name was also used in bad faith, as the Respondent retained it when he must have known that he was not entitled to do so and that retaining it, apparently renewing the registration, and refusing to transfer the domain name to the rightful owner was disruptive of the Calton Cases business and its owners which the Respondent must have known would be so.”

The decision UDRP-9149 is, without a doubt, one of those that should be kept in mind.

In UDRP-5715 (CIIRDC, UDRP-5715, Louis Thibault v. Erling Løken Andersen , December 30, 2019, <omnidrive.com>, denied), the request to transfer the domain name was rejected due to a lack of rigor (or quite only lack of evidence) in the demonstration of bad faith:

“a complainant must do more than simply point to the fact that a respondent owns a portfolio of domain names in order to establish bad faith registration and use under para. 4(a)(iii) 4(b).”

Finally, in UDRP-6911 (CIIDRC, UDRP-6911, Autopath Technologies Inc. v. Melanie Chapple , January 13, 2020), although the domain name (carnages.com, 2006) was identical to a previously registered trademark (CARPAGES, 2004), and that the two websites designate identical services (the sale of second-hand vehicles), the sole panelist considered that the owner of the trademark (whose market is limited to Canada) had not demonstrate that the holder of the domain name (whose market is in the United Kingdom) had registered the latter in bad faith. In addition, the operator of the British site had demonstrated a legitimate interest in the most appropriate manner by exhibiting a UK trademark and an active commercial site. Too bad, of course, for the Canadian company that planned to use the domain name carpages.com to expand its market in the United States. However, it was critical for the Canadian company to register the .COM from the start of its activity in 2004.