In 2022, the California legislature passed a legislative package acting on California Governor Gavin Newsom’s proposal to bring an early end to California’s 2020-2022 net operating loss (NOL) deduction suspension.  As a result, taxpayers may now deduct NOLs on their 2022 tax return.

Given this change, it is appropriate to revisit a few opportunities for taxpayers to maximize their California NOLs, including: (i) adding up to six years to an NOL carryover period, (ii) utilizing California NOLs “siloed” in certain legal entities on a combined group basis, and (iii) increasing NOL carryovers by computing pre-2013 NOLs using a single-sales factor apportionment formula.

The FTB’s “tax benefit/income testing” limitation on the statutory NOL extension provisions is invalid because:

Thus, the carryover period of California NOLs carried forward into the suspension years should be extended as follows: 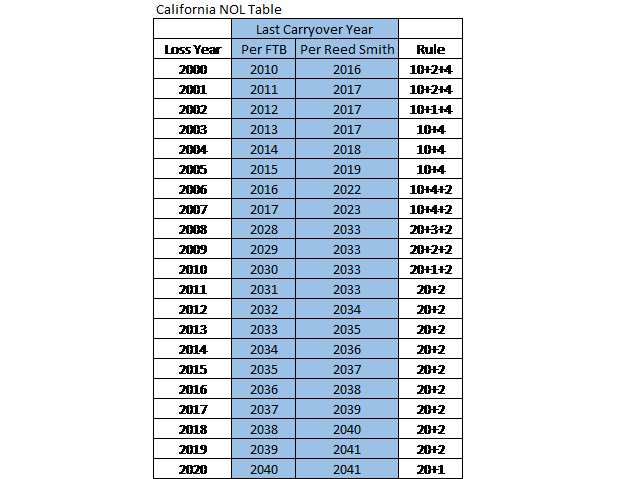 Taxpayers should also consider using this approach for purposes of valuing their deferred tax assets related to California NOLs.

California requires affiliated corporations conducting a unitary business to file a combined report, thus treating a group “as an integral unit in an entire business comprising the parent and all of its subsidiary corporations.” If a business is conducted in more than one legal entity, the state “look[s] at the total income of the group.” Therefore, although the statute imposes tax on “every corporation doing business” in California, the tax itself is computed as if a unitary group of corporations were a single entity.

The method of computing income of corporations within a unitary group also applies when computing losses of the members of the group. Thus, consistent with the theory of a unitary business, if a corporation is a member of a unitary group, an NOL is generated if the group’s deductions exceed the group’s gross income. The FTB agrees with this proposition.  Thus, it follows that if the NOL is defined by reference to a group’s deductions and gross income, the resulting carryover and deduction should be made against the group’s gross income in a succeeding year.  ndeed, the business income from all activities of a unitary business is combined into a single combined report, whether activities are conducted by divisions of a single corporation or by members of a commonly controlled group of corporations.

While income and losses are computed at the unitary combined group level, regulation 25106.5(e) of the California Code of Regulations explicitly computes an NOL at the corporate member level.  It does so based on a reading of Revenue and Taxation Code section 25108, which removes any context from its definition of “net operating loss.” That section defines the NOL deduction for a unitary group engaged in a multistate business.  Section 25108 uses the singular term to refer to the taxpayer (“the corporation” or “that corporation”).  But that singular term reflects a singular unitary group unit – not a particular legal entity within a unitary group. Thus, under section 25108, a group’s net loss should be deductible against the group’s net income.

This interpretation makes sense because:

After over 70 years of apportioning income using a formula based upon property, payroll, and sales, California, by voter initiative, adopted a sales-factor-only apportionment formula beginning with the 2013 tax year. As a result, taxpayers carrying pre-2013 NOLs, which were apportioned using a three-factor apportionment formula, into single-sales factor years are encountering an apportionment method mismatch which may be distortive. This mismatch causes the NOL deduction to fail its purpose of “strik[ing] something like an average income computed over a period longer than one year.”

For taxpayers deducting pre-2013 NOLs, a solution to this mismatch would be to request alternative apportionment under section 25137, seeking permission to apportion the pre-2013 NOLs using the same single-sales factor formula used to apportion the income against which the losses are being deducted.

Given the early termination of the California 2020-2022 NOL suspension, allowing taxpayers to utilize NOLs for the 2022 tax year, taxpayers should consider reviewing their NOL schedules to determine if they can benefit from a longer carryover period, utilizing their NOLs on a combined group basis, and/or computing their pre-2013 NOLs using a single-sales factor apportionment formula.