Today, the Department of Immigration, Refugees and Citizenship Canada (IRCC) announced another Express Entry draw for candidates involved in the Canadian Experience Class (CEC). The draw was later than expected, as typically in 2021 we have seen a pattern of a Provincial Nominee Program (PNP) draw followed by a CEC draw every second Wednesday and Thursday. However, the CEC draw expected on September 2nd did not take place.

The CEC is among the three programs managed under Canada's Express Entry system. The program is designed for skilled workers who have Canadian work experience and want to become permanent residents.

Draw (204) issued 2,000 invitations to apply (ITAs) to candidates with a minimum Comprehensive Ranking System (CRS) score of 462. The government is still on track to meet its ambitious target of welcoming over 400,000 newcomers throughout the year.

IRCC applied its tie-breaking rule with the timestamp of September 11, 2021, at 10:55:43 UTC. This means that candidates who had the minimum score of 462 are only invited if they submitted their Express Entry profile before the tie-breaking rule. 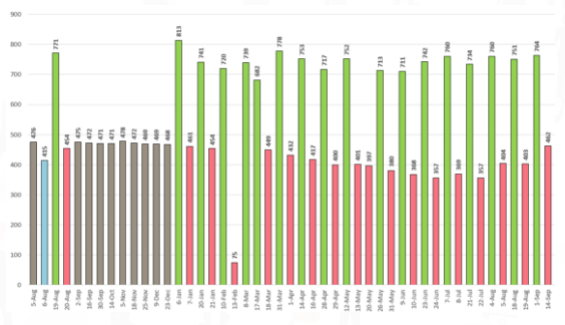