Carbon markets are tools that aim to cost-effectively reduce the emission of carbon dioxide (CO2) and other greenhouse gases (GHG). The Paris Agreement sets a goal to keep the global average temperature from rising by 1.5°C (2.7°F) above preindustrial levels and, failing that, prevent it from rising 2°C (3.6°F). Carbon markets are viewed as the primary market-based vehicle to drive reduction in GHG emissions to meet the ambitious Paris Agreement goal.

Looking ahead to COP26 – the twenty-sixth Conference of the Parties to the United Nations Framework on Climate Change – that starts next week, the expectation is that updated global climate targets and Paris-focused implementation rules will be established. In preparation for COP26, more than 100 countries have proposed new, more ambitious GHG emission reductions – nationally determined contributions (NDCs) – that may influence the future direction of carbon markets. President Biden, for example, announced earlier this year the US’s updated NDC, which will aim to cut GHG emissions from 2005 levels by 50% by 2030. However, other countries like China and India have yet to announce new NDCs.

As the world heads toward COP26, the objective of this post is to refresh the readers’ thinking on “carbon markets” and highlight some of the outstanding implementation issues associated with the Paris Agreement specific to carbon markets.

What is a Carbon Market?

Climate change is a global problem, therefore the logic behind using carbon markets is that the best way to mitigate climate change is to reduce GHG emissions where and how it is easiest – the least costly – to do so. Carbon markets are not new; they have existed at regional, national and sub-national levels since the Kyoto Protocol. 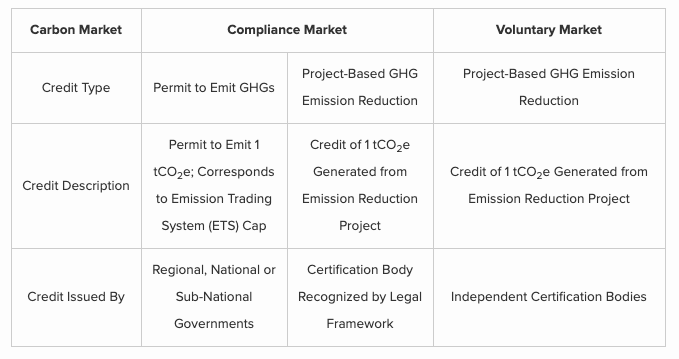 The current nature of carbon markets – notably project-based credits – is largely a legacy of the Kyoto Protocol. It is important to understand the legacy of the Kyoto Protocol to appreciate the future of the Paris Agreement. Two of the market-based tools established via the Kyoto Protocol are the Clean Development Mechanism (CDM) – allows developed countries to buy carbon credits (i.e., Certified Emission Reductions) associated with emission reduction projects in developing countries – and the Joint Implementation (JI), which is similar to the CDM, but the trade of emission reductions (i.e., Emission Reduction Units) happens between developed countries. The Kyoto carbon markets have been criticized as failing to drive down emissions (e.g., emissions reduction would have happened anyway) or, worse yet, have facilitated increases in emissions.

The Paris Agreement established a new framework for international carbon markets to replace the Kyoto Protocol markets. Under Article 6 of the Paris Agreement parties can pursue bilateral or regional cooperative approaches to meet their NDCs. Article 6.2, for example, provides an accounting framework for international cooperation (e.g., linking ETSs from two or more countries or sub-national governments) and allows for the international transfer of carbon credits between countries called “internationally transferred mitigation outcomes” (ITMOs). Article 6 also established a multilateral, centralized crediting mechanism. Article 6.4, for example, provides a framework to trade credits created anywhere in the world by the public or private sector from emissions reductions generated through specific projects (e.g., country X pays country Y to build renewable energy generation instead of fossil fuel generation; Y benefits from a new energy source and X receives credit for the avoided GHG emissions). Whereas Article 6.2 involves trading between countries, Article 6.4 revolves around projects carried out by “public and private entities.” The Article 6.4 market is often referred to as the Sustainable Development Mechanism (SDM) and would replace the CDM from the Kyoto Protocol. Article 6 also addresses non-market approaches (e.g., carbon taxes), but those issues are outside the scope of this post (see Article 6.8).

An issue is that the Paris Agreement countries have not been able to agree on the framework to operationalize Article 6 (i.e., the “Paris Rulebook”). The idea is for a multilateral document to guide carbon markets and encourage the development of true international carbon markets, as opposed to relying on piecemeal national and bilateral actions. There is an incentive to finalize the Article 6 rules; the International Emissions Trading Association estimates the potential benefits to cooperation under Article 6 to meet NDCs include cost savings of $250 billion per year by 2030.

The bulk of the Paris Rulebook was finalized in 2018, but the Article 6 part has been stalled. Resolution on rules for Article 6 have been hampered by conflicts between countries on certain principles. Brazil has insisted on relying on Kyoto-based credits under the CDM to meet its Paris-based NDC (i.e., double counting credits). The practical effect of the failure to finalize the Paris Rulebook for Article 6 is a delay in the potential formation of the next generation of global carbon markets to drive emission reductions. The expectation is that moving from conceptual and abstract discussions on Article 6 to seeking compromise and actionable rules will be a focus of COP26.

Notwithstanding the uncertainty associated with the finalization of the Paris Rulebook, as a practical matter, countries have been piloting Article 6 activities, which may inform the COP26 negotiations. Climate Focus developed a helpful report on global emission reduction projects that aim to generate IMTOs under Article 6 and associated carbon markets.

There are numerous issues on the agenda for COP26, but answering some of these questions associated with carbon markets and finalizing the Paris Rulebook in the context of Article 6 will be one measure of the success of COP26.