How you should align your acquisition approach with your growth strategy

Companies often apply the same M&A diligence and integration playbooks to all deals, rather than tailoring activities to the strategic rationale behind the particular transaction.As more than half (52%) of companies expect to actively pursue M&A in the next 12 months, according to the EY Global Capital Confidence Barometer survey, it’s critical for them to align their deal processes with their growth strategies, whether it’s to acquire new capabilities, consolidate or grow their products or their market share.

In the recent EY Buy & Integrate global pulse survey focused on the acquisition process, inadequate diligence was noted as a major challenge to achieving the targeted deal value. Of the 300 chief financial officers, chief operating officers and corporate development officers who participated, 25% cited this as a key challenge, second only to regulatory and geopolitical issues (37%).

Meanwhile, when it comes to M&A integration, the two most frequently cited pain points include talent assessment or retention (23%) and technology integration (20%).

More than 70% of executives said their most significant acquisition met expectations for value creation, which is consistent with what we see in practice. But only 7% said their diligence accuracy, in particular, exceeded expectations. Clearly, there is more work to do. If companies fail to identify and focus the majority of their time on the most critical items during the fast-moving diligence process, big value drivers can be missed.

Our c-suite survey also revealed that the most effective strategies to ensure companies met or exceeded value creation and synergy realization goals were:

But what should executives really focus on? Focusing on specific priorities based on the deal type is essential for maximizing value. Here are some areas to prioritize for M&A diligence and integration, whether the deal type is strategic growth, scale or consolidation, transformational or tuck-in.

In a strategic growth transaction, the acquirer effectively buys its way into an adjacent area to take advantage of the growth in that area or to acquire an adjacent asset that it cannot build on its own quickly enough to take advantage of the market opportunity. Examples of these deals include Amazon’s purchase of Whole Foods to accelerate its push into grocery and Microsoft’s acquisition of LinkedIn to bring in the business-focused social network, its immense data and its technology — eventually being able to integrate platforms such as the internal Microsoft Office network within various companies.

Our recent survey shows inadequate diligence as being the foremost challenge for strategic growth acquisitions. Companies must identify both the “crown jewels” to protect and the operational areas likely to provide the greatest sources of synergy. They must then perform commercial diligence to understand “how wide the moat is,” including the strength of the competition and the target’s ability to defend its turf. Overall, companies need to answer these critical questions: 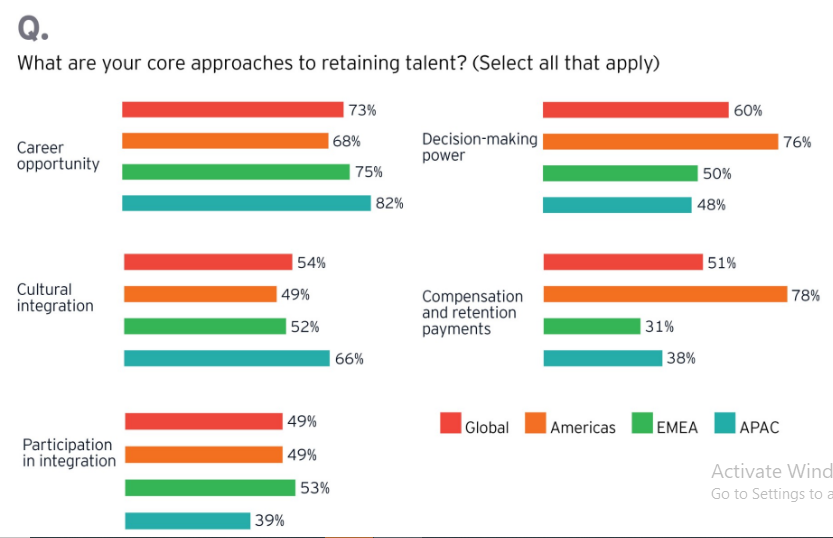 Since strategic growth transactions are about revenue growth, trying to aggressively integrate too much too soon can unduly burden management and employees of the acquired business, risking a talent exodus and reducing the value of what the buyer was trying to acquire. Overall, executives should be wary about adding complexity and near-term business disruption.

In one case, a large global beauty care company acquired a founder-led, multichannel brand in order to increase its total points of distribution and expand its presence overseas. Rather than focus on back-office synergies, the acquirer quickly tried to integrate marketing, sales, business planning and R&D. The result was a culture clash between the established company and more entrepreneurial target, followed by a backlash and significant talent drain, causing the target’s growth to decelerate and ultimately led to a write-off of some of the value of the business.

Typically, critical parts of the business are left to stand alone in these deals, at least for the first two to three years, so that the acquirer can more properly understand and assess performance drivers and learn from them. On the other hand, integrating functions related to regulatory, compliance, and financial and accounting requirements often still needs to be completed early on. This is also true of some aspects of compensation and benefits. Decisions about other infrastructure or back-office areas, such as information technology and the supply chain, are highly dependent upon the current-state operating models of both the acquirer and target.

Many commercial aspects, such as sales, marketing and customer strategy, are never fully integrated because they are often precisely the capabilities or growth drivers that drove the deal and deal premium in the first place.

Consolidation deals are essentially the opposite of strategic growth deals. They create value through cost and sometimes through revenue or pricing synergies — essentially, they are about scaling up and leveraging the same infrastructure or manufacturing or go-to-market capabilities to enhance profitability and, to some extent, market share. In a “winner-take-all” corporate world, these deals have become critical in many industries. Examples include T-Mobile/Sprint (telecom), Bayer/Monsanto (agribusiness) and Marriott/Starwood (hospitality). In our survey, 56% of respondents said that improvement in procurement and distribution is the most crucial approach for cost savings in these types of deals.

Consolidation deals can be challenging due to the time and complexity of hitting what are typically very large synergy targets. Underestimating cultural differences can be another potential pitfall. The transactions are also typically subject to the most antitrust scrutiny.

As these acquisitions provide a large field of potential synergy or cost savings, it may not be surprising that synergy identification and modeling was named as one of the most critical aspects of the diligence process. 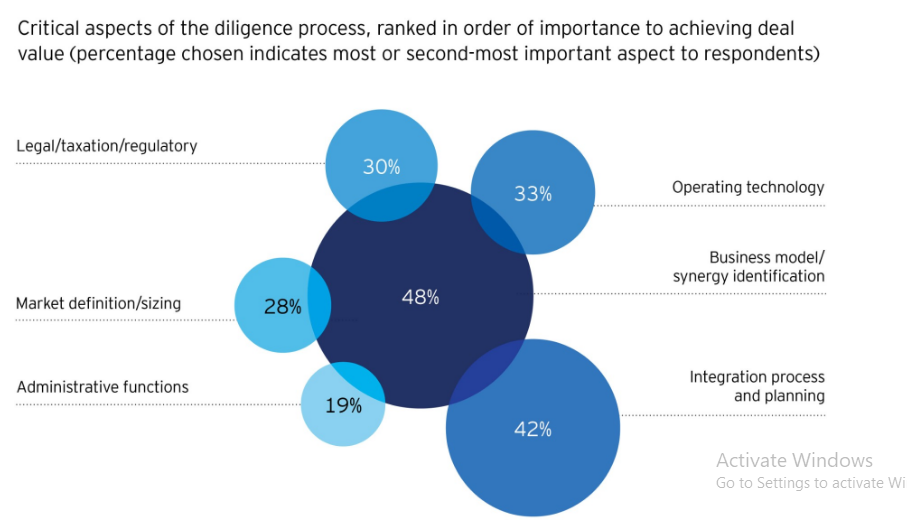 As much of the deal value will come from synergies, teams must have a clear and granular understanding of the present top-line and cost structure components, and how they will look in the future. Too often synergy estimates are missed because a team does not have intimate knowledge of the true recurring earnings of the businesses — first on a stand-alone basis, and then on a combined basis.

Companies should capture synergies early in a well-planned integration process with a shared understanding between various functional areas. A rule of thumb is to capture 60% to 70% of the run rate target within 12 months post-close.

There are several areas of risk in these types of deals, however, including making sure any changes do not prompt the loss of prominent customers to competitors. Other considerations include understanding the compatibility of IT and enterprise resource planning systems and the broader IT environment more generally.

Transformational deals are the rarest and the most challenging. The deal goal is to create a new value proposition for the acquirer, add to its core competencies and bring about industry disruption. Despite the name, the cost to transform a business need not come at a multibillion-dollar price: one example is Google’s acquisition of Android in 2005, for a fraction of that amount,* that allowed Google (and others) to compete successfully in the smartphone market.

*US$130 million was the total for all of Google’s acquisitions in 2005; the amount paid for Android was never separately disclosed.

These deals inherently require rigorous diligence, especially as the acquirer may have little experience with elements of the target’s business. Things to remember:

Communication is especially important for transformative deals. Buying a business that is outside of the acquirer’s core competency requires a long-term strategic vision that must be understood by employees and stakeholders. Attention to external stakeholders, such as customers and business partners, is also critical, lest they pull away from the new entity.

Value creation will be based on stability and growth of the business, so the integration team needs to think beyond the scope of the acquisition to truly transform the business, making deep sector knowledge critical. This means understanding where the most valuable assets are, the profit pools and the competition. Maintaining focus on the strategic rationale for the deal and the integration plan along each step in the integration process is essential.

Tuck-in deals are typically relatively smaller acquisitions of businesses that fit into the acquirer’s core business, such as Disney’s acquisitions of Pixar, Marvel and Lucasfilm LTD; Brown-Forman’s acquisitions of the Maximus Vodka brand, Slane Castle Irish Whiskey and Casa Herradura tequila; and Johnson & Johnson’s acquisition of Vogue International LLC shampoo. While the acquirer is quite familiar with the target business, companies still need to conduct thorough diligence to avoid surprises.

The diligence priorities are similar to the ones in transformation deals above, except given that these are typically smaller transactions, operational diligence becomes paramount as these deals often require more fixing and investments than acquirers realize. For example, in the personal health and beauty care space, we have often seen acquirers underestimate the changes they need to make to R&D, quality and the supply chain in order to successfully “tuck in” these deals. Even integrating supply chains with different pallet sizes can involve a material cost.

Rapid involvement of the business units with the acquired business is essential, as these deals almost always involve a full integration, with the possible exception of marketing and creative. This supports the opportunity to increase revenue by leveraging brand strength across a larger organization.

A large life sciences company executed a number of sequential acquisitions but decided to leave each business “as is” and not integrate the financial or IT systems, nor the field force, due to other near-term priorities. Ultimately, overall business performance slowed, and the acquirer then had to launch a multiyear delayed integration process, resulting in significant revenue and earnings losses.