This article is a first in a two-part series highlighting some of the key findings reported by the Canadian Study and the US Study and comparing some of the results of the Studies. This article will first discuss the study samples and then focus on indemnification matters. The trends revealed by these Studies are enlightening but it is important to bear in mind that referring to deal point studies is not a substitute for reasoned negotiations.

The Studies samples can influence the results. The Canadian Study sample was obtained from acquisition agreements filed on SEDAR (the System for Electronic Documents and Analysis and Retrieval) maintained by Canadian securities regulatory authorities for reporting issuers and by cross-referencing press releases with filings on EDGAR (the SEC's "Electronic Data Gathering, Analysis and Retrieval" system). A transaction agreement is filed on SEDAR or EDGAR when a public company was involved in the structure of the target, the seller or the buyer (although it was a "private" transaction) and the transaction was material for that public company. Having a public company involved on at least one end of the transactions could skew results compared to transactions where no public issuer is involved and may therefore not always represent general practice.

In private M&A transactions, some of the highly negotiated issues are those dealing with post-closing indemnification. The Canadian and US Studies report on several indemnification deal points including the following.

In a non-reliance provision, the buyer provides that it is not relying on representations and warranties, other than those in the agreement. In a disclaimer of seller’s representations provision, the buyer disclaims any representations or warranties that the target, or the sellers may have made to the buyer that are not contained in the purchase agreement. In number of cases, in the last few years, sellers in the US have tried to rely on these provisions to bar fraud claims by buyers. According to Delaware law, both provisions should be used together to bar a buyer’s fraud claims. For the first time, the US Study not only looks at non-reliance provisions but also looks at non-disclaimer clauses and both are included in almost two-thirds of deals. The Canadian Study indicates that non-reliance clauses are less common in Canadian deals.

Purchase agreements typically specify the time during which representations and warranties (and sometimes covenants) survive closing. The Studies show that most deals have a general survival period between 12 months and 24 months, with the sweet spot being exactly 18 months. In many cases, a survival period around 18 months will allow a buyer to uncover most problems: a buyer will have had time to run the business and will be able to perform at least one post-closing audit.

One interesting note is that the US Study shows an increase in the number of agreements that provide for an express no survival period (14% of all US deals, up from 7% in the 2017 US Study).[2] No survival deals are increasing in popularity with the growing use of representations and warranties insurance (RWI) as a buyer can look to the insurance policy for recovery from losses instead of the seller. Indeed, the US Study shows that the percentage of agreements referring to RWI has also increased (52% up from 29% in the 2017 US Study).

Indemnity baskets establish the minimum dollar amount of certain types of losses a party must suffer under the purchase agreement before the other party is obliged to indemnify it. Baskets can be (i) deductible: once a party's losses exceed the amount specified in the agreement, the other party must indemnify only for losses exceeding the specified amount; or (ii) first dollar: once a party's losses exceed the specified amount, the other party must indemnify for all losses starting from dollar one. A basket may also be a "combination" of a deductible and a first dollar. Both in the US and Canada, most deals have baskets. However, according to the US Study and the Canadian Study (including prior versions), Canadian and US practice diverge on some points including the types of basket used and the size of the basket, with baskets being larger in Canada. The divergence on the size of the basket may be explained by the fact that Canadian deal values tend to be smaller than US deal sizes and, in our experience, basket size as a percentage of transaction value tends to be greater the lower the purchase price. Interestingly, the Canadian Study reports that 19% of deals had no basket, which is an increase from the 2016 Canadian Study which reported that only 9% of deals had no basket.

In Canada, the mean basket was reported at 1.05% of transaction value when considering all baskets together other than combination baskets, which seems high given the fact that the Canadian Study reports that 73% of transactions have basket that is 1% or less as a percentage of transaction value (with 34% at less than 1% but greater than 0.5% and 39% at less than 0.5%). Perhaps a better indicator is the median value since it looks at the midpoint result and has the advantage of not being affected by any single percentage that is high or low compared to the rest of the sample. The median basket was reported as 0.55% for all baskets other than combination baskets and the median deductible was reported at 0.55% (more aligned with the US practice where both the median basket and the median deductible are reported at 0.50%). Our experience suggests that a large percentage of baskets (whether deductible or first dollar) lie somewhere between 0.5% and 1% of transaction value.

Also, the US Study and the Canadian Study show that Canadians are more likely to include first dollar basket rather than deductible basket, contrary to US practice, and combination basket can still be found in 7% of Canadian deals, whereas they all but disappeared from the US deals. 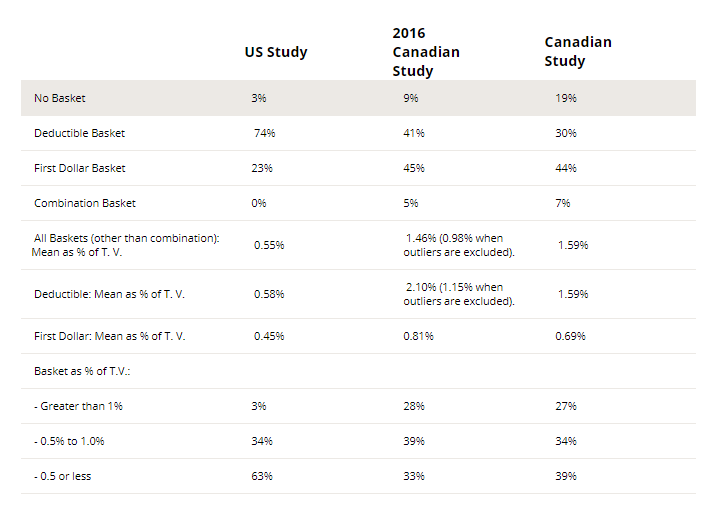 Finally, the US Study reports on the impact of RWI on baskets. According to the US Study, the presence of RWI positively correlates with a deductible basket but does not really impact the size of the baskets.

Purchase agreements may also contain a cap on certain indemnification obligations which sets out the maximum amount a party can recover for losses. The Studies indicate that in the US and in Canada, almost all deals with a survival provision include a cap, however the percentage of transaction value used as a cap is still substantially lower in the US than in Canada

The US Study reports on the impact of RWI on the percentage of transaction value used as a cap and shows that both the median and the mean are lower in deals that include a reference to RWI than those that do not.

According to the Studies, on both sides of the border silence is the norm with respect to incidental damages and diminution in value, however, a few differences between Canada and the US remain with respect to some headings of damages. Canadian agreements are as likely to expressly exclude consequential damages and punitive damages as they are to be silent with respect to those headings, whereas most US agreements usually expressly exclude punitive damages and are silent on consequential damages. Finally, for the first time, the US Study looked at coverage for loss of profits and damages based on multiple and reported that most US transactions were silent on both issues (respectively, 82% of the all US deals and 92% of all US deals).

The parties may provide for an escrow (in which case, a portion of the price will be deposited in a separate account, generally held by a neutral third-party such as a bank, for a specified period of time) or a holdback (in which case, the buyer retains a portion of the purchase price) in order to fund the indemnity and to expedite its payment to the buyer, as the case may arise. Of all deals with survival provisions, the Studies show that US agreements are more likely to provide for an escrow or a holdback and that US agreements are more likely to expressly specify that the escrow or holdback does not prevent the buyer from exercising its other remedies. Of note, there is a convergence on the median percentage transaction value placed in escrow or holdback between both sides of the border (4.78% according to the US Study and 5.23% according to the Canadian Study).

Finally, for the first time, the US Study reports on the impact of RWI on the percentage of transaction value placed in escrow or holdback and shows that both the median and the mean are lower in deals that include a reference to RWI than those that do not.

For further details on these and other deal points, please consult the Studies, which are all available to ABA members on the Markets Trends Subcommittee of the American Bar Association’s Mergers and Acquisitions Committee website.