This article by Daniel Weinger, Vincent Ferraro and Chris Duerden was originally published by Law360 on November 20, 2019.

Congress implemented AIA reviews to streamline disputes over patent validity, with the goal of reducing costs for all involved. One tool Congress provided to patent owners is the ability to amend claims during an AIA review should any of the original claims be found unpatentable. In theory, the amendment procedure provided patent owners a meaningful way to retain patent rights, even if it was more narrow, in light of prior art that invalidated the original claims.

In the infant years of AIA reviews, however, motions to amend were almost never granted because the Patent Trial and Appeal Board placed the burden on the patent owner to prove patentability, rather than keeping it on the challenger to prove unpatentability.

In October 2017, the U.S. Court of Appeals for the Federal Circuit in Aqua Products Inc. v. Matal shifted the burden by putting it back on the challenger to prove unpatentability. This article examines motions to amend post-Aqua Products, as well as other recent favorable trends for patent owners and motions to amend.

The AIA authorizes patent owners to file motions to amend.[1] While a motion to amend is theoretically a tool available to patent owners, in practice, the PTAB rarely granted such motions. One of the major reasons for this was that the PTAB put the burden to prove the patentability of the proposed substitute claims on the moving party (i.e., the patent owner), even though the authorizing statute for AIA reviews put the burden to prove the unpatentability of the challenged claims on the petitioner.[2] 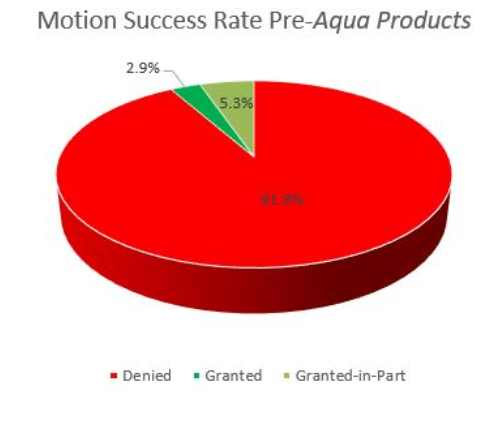 Enter the Federal Circuit’s en banc ruling in Aqua Products Inc. v. Matal.[4] In October 2017, the Federal Circuit materially changed the burden of proof associated with the patentability of amended claims during an AIA review. Because the statutory scheme required the petitioner to prove unpatentability in an AIA review, with no distinction between motions to amend or original claims, in Aqua Products, the en banc Federal Circuit shifted the burden from the patent owner seeking the amendment to the patent challenger opposing it.

This placement of the burden complies with the requirements of Title 35 U.S. Code Section 316(e), while the PTAB’s previous practice did not. The PTAB recognized the effect of Aqua Products and applied it in Lectrosonics Inc. v. Zaxcom Inc.,[5] which the U.S. Patent and Trademark Office has now proposed codifying in Title 37 Code of Federal Regulations Sections 42.121 and 42.221.[6]

Aqua Products was a monumental sea change in the law on motions to amend, but at the time it was not clear what effect, if any, it would have on the previously low success rate of motions to amend.

This positive trend appears to have staying power as well. Because the USPTO has not updated the public data on motions to amend past September 2018, we analyzed every AIA review before the PTAB after the time period covered by the USPTO Motion to Amend Study. During this period between Sept. 30, 2018 and Oct. 24, 2019 we found the PTAB decided 103 motions to amend. Of those, 19 were granted and 5 were granted in part, for a success rate of 23.3%. 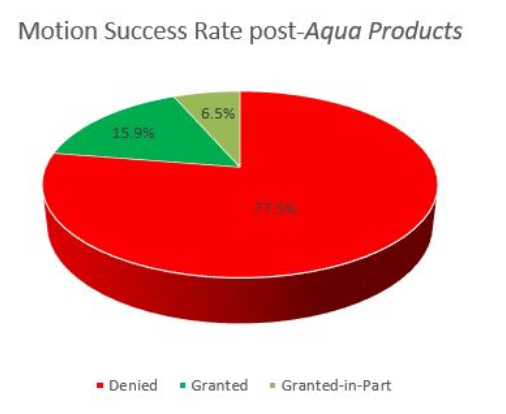 Other Favorable Trends for Patent Owners and Motions to Amend

Trends in motion to amend practice in AIA reviews continue to march in patent owner’s favor. In addition to the burden shifting that resulted from Aqua Products, USPTO Director Iancu instituted other practices to ensure patent owners get a fair shake on motions to amend.

As a first option, a patent owner may choose to receive preliminary guidance from the PTAB on its motion to amend. The second option is that a patent owner may choose to file a revised motion to amend after receiving petitioner’s opposition to the original motion to amend and/or after receiving the PTAB’s preliminary guidance, if requested. It is perhaps too soon to draw any conclusions on the pilot programs’ effect on motions to amend, but it is something we and the patent community at large are closely watching.

Post-Aqua Products motion to amend practice appears more favorable than pre-Aqua Products practice. But even a 23% success rate is less than ideal. Practitioners thus may also consider whether reissue applications are a preferred avenue for preserving patent rights after an AIA review finds claims unpatentable.

Additionally, motions to amend and reissue applications are cooperative tools in the patent owner's tool box, rather than one-size-fits-all solutions to AIA challenges. Patent owners intent on maintaining their patent rights by amending their claims should consider utilizing these tools to maximize their chance to obtain amended claims, including utilizing the following strategies:

Going forward, rather than abandoning the use of motions to amend (which may have been the case pre-Aqua Products), patent owners should consider how motions to amend can be utilized as part of the patent owner’s strategy to maintain patent rights challenged by AIA reviews.

To view all formatting for this article (eg, tables, footnotes), please access the original here.
Mintz - Daniel B. Weinger
﻿
Back Forward