The Horse Before the CAR-T

If you had not heard of Tom Long before this week, chances are you will know who he is now and know his story. Tom, an Australian actor, was diagnosed with multiple myeloma (a blood cancer) seven years ago. After all conventional treatments including stem cell transplants and other trial drugs failed, Tom was fortunate to be accepted into a clinical trial in Seattle, USA that commenced in April this year.

The trial was a Chimeric Antigen Receptor T cell (CAR-T) therapy. This immunotherapy involved removing Tom’s own immune cells (T lymphocytes) from his blood, engineering the cells to express a receptor targeted to his own myeloma cancer cells and injecting the engineered cells back into Tom, where it was hoped that they would multiply and turbo charge an attack on his cancer cells. Fast forward three months later and Tom has returned to Australia with no evidence of myeloma in his bone marrow.

Immunotherapy is now referred to as the ‘fifth pillar’ of cancer treatment. In 2018, the FDA approved 17 new drugs for haematological malignancies. Significantly, none of these new drugs were for chemotherapeutic agents rather they were immunotherapy drugs and monoclonal antibodies.

The development of CAR-T therapy reflects basic discoveries in immunology, a long history of research in understanding the human immune system and development of genetic engineering tools. CAR-T therapy is the translation of this cumulative scientific and clinical knowledge.

The patent landscape reflects the evolution of technologies and technical trends. In our own patent searching the key term ‘CAR-T Cell Therapy’ first appeared in patents dated from 2011, consistent with CAR-T therapy being an emerging technology and only very recently approved for clinical use in limited applications.

However, there are earlier patents that cover CAR-T cells or engineered cell constructs that were precursors to the CAR-T cells. For example:

The patenting activity related to CAR-T cell inventions and the top patent applications are shown below3. The increase in patenting activity from around 2013 appears to correlate with the translation of the technology into the clinic and commercial interest in the technology. The top applicants correlate with those researchers/institutes that have been pioneers in CAR-T research. 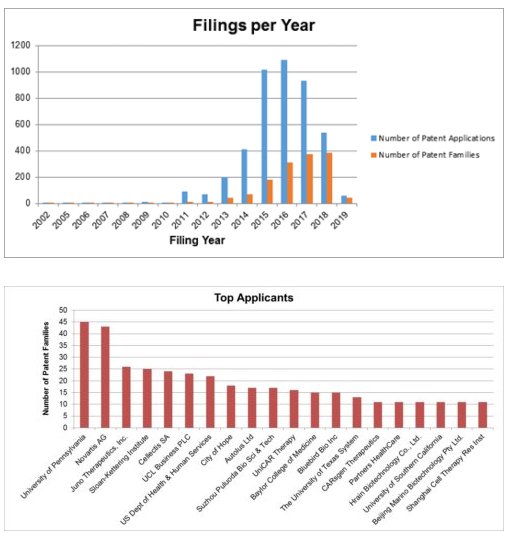 This emerging immunotherapy: CAR-T is showing great promise in the clinic and has been life saving for patients like Tom Long but there is a horse before the CART and that is the long investment in good science and its translation to the clinic.