The effect of cloud gaming on videogame piracy

During the “new normal”, videogames are providing a platform for socialisation and a welcome distraction from the crisis, which has resulted in videogames exploding in popularity. This increased demand for stay-at-home media has caused an online media piracy spike; however, with the launch of cloud gaming services, there is a possible solution to the balance of the publishers’ need to protect their intellectual property (IP) and the consumers’ need for the best videogame experience.

Although there is conflicting evidence on the effect of videogame piracy, huge effort and expense has been made to eliminate piracy through digital rights management (DRM) technologies. DRM has had some success but has also come under fire for causing performance issues, including slower level loading and framerate drops. DRM has also been criticised for being “always technically breakable” because the keys needed to decrypt the game must be stored in the game and as a result, videogames are frequently pirated within days of release.

Cloud gaming services—such as Google Stadia, PlayStation Now, or Microsoft’s xCloud—store and process the game on their servers before streaming the video footage to the gamer. This eliminates the need for the gamer to purchase expensive hardware or wait for software updates. For the publisher, keeping the game assets away from the consumer, and only streaming the final product, keeps their game IP safe. Game IP may include assets (such as character models and textures), music, videos, and proprietary code.

If these problems can be addressed, cloud gaming may earn itself a niche, particularly for gamers who do not mind their games being out of their direct control and for non-latency critical games. This possibly bright future is reflected in the cautious numbers of published US patent applications filed in this field over recent years. 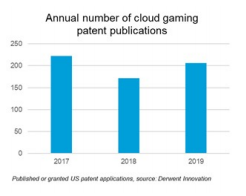 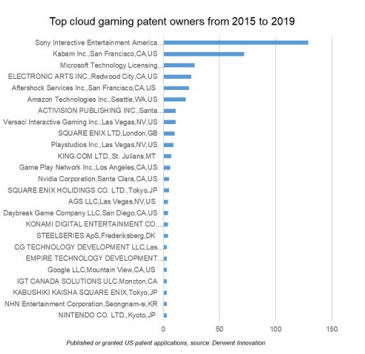 However, as the solutions to the current disadvantages of cloud gaming may lie in other fields, for instance in network protocols, network infrastructure, and compression algorithms, many patent applications for technologies vital for successful Cloud gaming may not be shown in this data.

Despite the difficulties developers face in producing videogames during the pandemic, many videogames will be released in the next months and developers will want to secure their IP, which will often be their most valuable asset. Cloud gaming could provide part of the solution for videogame piracy alongside more traditional IP protection measures, such as copyright, trademarks, and patents.