Winds of fortune: the tide turns in for Australia’s offshore wind industry

Despite a continent’s worth of coastline and world class wind resources, Australia has until recently had no legal framework governing offshore wind. However, as we previously reported, the Offshore Electricity Infrastructure Act 2021 (Cth) (OEI Act) was passed in December 2021 to lay down the legal architecture governing offshore renewable electricity projects. The laws are set to take effect on 2 June 2022.

In March 2022 the Offshore Electricity Infrastructure Regulations 2022 (Regulations) were released, and public consultation for these has now ended. Guidelines have also been prepared. This means that from 2 June 2022 Australia is ready to catch up with Europe, the US and parts of Asia in being able to say it is ready and able to sustain an offshore wind industry.

In this context, the state of Victoria has been first to announce an ambitious program of offshore wind targets.

With all of these developments the world’s offshore wind sector is now looking to Australia as an area of opportunity to explore untapped offshore wind potential. 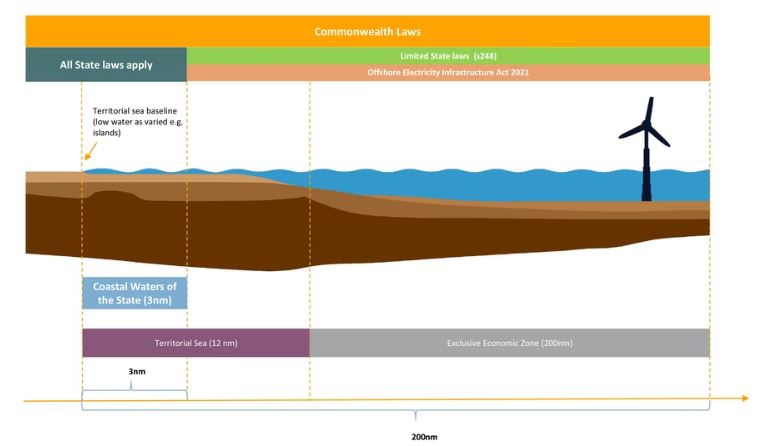 Key features of the OEI Act

The OEI Act operates to ‘open up’ offshore areas to electricity generation through a declaration by the Minister of ‘declared areas’. The initial expectation is that areas offshore NSW and Victoria will be the first declared areas.

Borrowing from offshore oil and gas licensing concepts, project proponents will be able to apply for feasibility licences within declared areas (much like an exploration licence) to assess licensed areas for suitability. Feasibility licence holders will then have an exclusive right to apply for a 40 year term commercial licence over the same area to permit the carrying out of the project (much like a production licence).

The regime does not provide for an auction for licence areas. However, if competing applications are made for feasibility licences over overlapping areas, the overlap is not removed and the applications are determined to be of equal merit, then financial offers will be invited to determine licence award. We expect the extent to which financial offers to secure licence areas will be a feature of this regime will depend on the size of the initial declared areas and of course the level of competition for licences.

The below diagram sets out in high level the key features of the licensing regime. 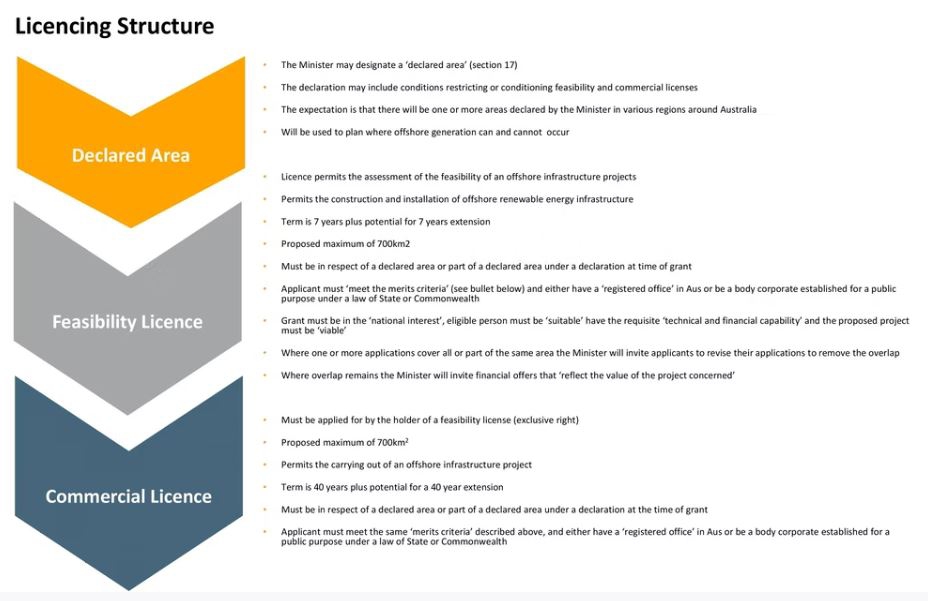 Similar to the position in offshore oil and gas licensing regimes, transfers of licences will require Ministerial approval, as will direct and indirect changes of control (with the control threshold set at 20%). However, the legislation does not provide for a public register that allows tracking of any dealings in titles including any security interests granted. Security taking will be exempt from the operation of the Personal Property Securities Act 2009 (Cth).

Financial security will be required to be given for future decommissioning costs, and, replicating recent changes to Australia’s offshore oil and gas laws, explicit provision has been made for trailing liability with respect to decommissioning liabilities.

The new framework provides that the offshore oil and gas titles regulator NOPTA and safety and environmental regulator NOPSEMA will regulate this space.

Bringing the power to market, including landing undersea transmission cables onshore and connecting to the grid will be governed by existing state and federal regimes (e.g. network connection processes under applicable legislation governing access to the power system in the National Electricity Market, WA Wholesale Electricity Market or other power systems not connected to those markets operating in Australia, state land access, planning, native title). That said, the new regime does include a separate regime for the licensing of undersea transmission cables.

Later in 2022 the Victorian Government proposes to release an Offshore Wind Implementation Statement, which we anticipate will provide further details on the first offshore wind tranche.

We would expect the Victorian Government to work closely with the Federal Government to align the objectives laid out in the Directions Paper with the first ‘declared areas’ under the OEI Act.