The Tax Cuts and Jobs Acts (TCJA) repealed § 958(b)(4) of the Code, which prevented downward attribution of stock ownership from a foreign person to a US person. That repeal has resulted in many foreign corporations being treated as Controlled Foreign Corporations (CFCs) even though they are not actually controlled (and sometimes not actually owned at all) by US shareholders, resulting in apparent outcomes that can be adverse or favorable to the taxpayer, depending on the situation. On October 1, 2019, Treasury and the IRS issued proposed regulations and a revenue procedure that address certain unintended consequences of the repeal of § 958(b)(4).

For background, § 958 provides ownership attribution rules for determining whether a foreign corporation is a CFC and for related purposes. Section 958(a) contains rules regarding direct and indirect ownership, and § 958(b) contains rules regarding constructive ownership, which generally apply the principles of § 318(a) with certain modifications. Before the TCJA, § 958(b)(4) provided that § 318(a)(3) “shall not be applied so as to consider a United States person as owning stock which is owned by a person who is not a United States person” (so-called downward attribution).

The repeal of § 958(b)(4) causes additional foreign corporations to meet the definition of a CFC under the constructive attribution rules, many of which corporations have no direct or indirect ownership by US shareholders. The repeal produced many unintended results under collateral provisions that depend on a corporation’s status as a CFC for various purposes. To address certain of these instances, the proposed regulations modify or add regulations under the relevant Code section that uses the concept of a CFC. The result of the proposed regulations is that the pre-TCJA scope of the provisions is restored by turning off downward attribution from a foreign person to a US person to determine CFC status or as is otherwise relevant for purposes of these Code sections.

Some of these returns to the status quo ante are generally taxpayer favorable:

Other returns to the status quo ante are generally adverse to taxpayers:

Eversheds Sutherland Observation: Notably, no relief was provided related to the portfolio interest exemption (which generally precludes CFCs from qualifying for the exemption from tax on US source interest that might otherwise apply), as well as to numerous other implicated provisions, perhaps based on a view that the appropriate regulatory authority is not provided by the relevant statute. At a recent ABA Tax Section meeting, Treasury and IRS officials stated that they were open to further relief based on taxpayer comments.

Eversheds Sutherland Observation: S. 2589 and its companion, H.R. 4509, were recently introduced and referred respectively to the Senate Finance Committee and the House Ways and Means Committee. S. 2589 and H.R. 4509 would amend § 958 to once again include the repealed language under § 958(b)(4). In addition, S. 2589 and H.R. 4509 would add a new provision, § 951B, that would address amounts that would be required to be included in the gross income of a “Foreign Controlled US Shareholder.” Proposed § 951B applies only to US shareholders that would hold a controlling interest through downward attribution, and thus targets the de-control transactions that were the target of the repeal of § 958(b)(4). Under the bill, the change would be retroactive to the last taxable year of a foreign corporation beginning before January 1, 2018 (i.e., the effective date of the repeal).

Rev. Proc. 2019-40 provides three safe harbors for determining information related to certain foreign corporations. Under the revenue procedure, penalties under §§ 6038 and 6662 will not be applied in cases where the taxpayer complies with the safe harbors. The revenue procedure also amends the filing requirements with respect to Form 5471, Information Return of US Persons with Respect to Certain Foreign Corporations.

The second and third safe harbors are premised on the concern that a US shareholder may not be able to obtain information regarding a foreign corporation’s operations that satisfies the evidentiary and other requirements of the Code. Both of these safe harbors allow the US shareholder to rely on what is termed “alternative information,” which, depending on availability, is generally entity-level financial statements prepared in accordance with GAAP or international or local accounting standards or records used by the foreign corporation.

The revenue procedure also announces that the IRS intends to revise the instructions to Form 5471 to reduce or eliminate Form 5471 reporting requirements for Category 5 filers based on the shareholder’s ownership in and relation to the CFC. The following chart shows the proposed limitations on reporting. 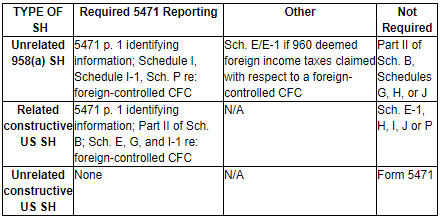