On 11 November 2020 the government published the National Security & Investment (NS&I) Bill. In a marked contrast to its 'Global Britain'(1) aspirations in a post-Brexit world, the bill will create a mandatory screening regime for investment in certain core areas of the UK economy in which national security risks are considered more likely to arise.

The mandatory regime will have a suspensory effect for transactions that are subject to the mandatory filing requirement. If the NS&I Bill is passed in its current form, it will also be a criminal offence to complete a transaction without first obtaining approval from the secretary of state for business, energy and industrial strategy (currently Alok Sharma). Businesses could also be fined up to £10 million or 5% of their worldwide turnover (whichever is higher).

The bill proposes to grant the secretary of state with a 'call-in' right, whereby the government will be able to call in and review transactions that it considers may give rise to national security concerns. Notably, this call-in right will apply retrospectively, with effect from 12 November 2020. Subject to passing through Parliament, the bill is due to come into effect by early 2021.

A voluntary regime is proposed relating to investments in non-core areas, where these investments satisfy pre-defined 'trigger events'. For these transactions, investors will need to self-assess whether the transaction could give rise to national security concerns. If a transaction is not notified under the voluntary regime, the secretary of state retains a call-in right for up to six months from the date on which they become aware of the transaction (subject to a long stop date of five years from the date of the acquisition).

Crucially, the NS&I Bill applies to specific sectors of the economy and categories of assets. It is not – despite previous billing – a foreign direct investment (FDI) screening regime as it does not discriminate based on investors' location or nationality.

This article considers the key implications of the proposed new regime for investment in the United Kingdom.

The NS&I Bill was announced in the October 2019 Queen's Speech (made on the advent of Boris Johnson's premiership after he succeeded Theresa May as leader of the Conservative party).

However, the bill's roots go much deeper. As Sharma noted when announcing the NS&I Bill, "[t]he UK is not alone in making such changes to its regime, which means global investors will be familiar with our approach". That said, the United Kingdom is alone in that this regime applies both to domestic and inbound investment.

By contrast, from Australia to North America, countries across the globe have in recent years introduced FDI screening regimes to protect key industries from perceived threats of 'harmful' foreign investment.

At the EU level, a new regulation establishing a framework for FDI screening (the EU FDI Regulation (2019/452)) entered into force on 11 October 2020, and the European Union was recently consulted on introducing a new regulatory module aimed at countering foreign subsidies that may facilitate the acquisition of EU companies.(2)

The EU FDI Regulation lays the groundwork for a harmonised EU-wide approach to FDI screening. The regulation:

Concerns around FDI have in recent years related to investment from Chinese-based companies, such as Huawei, which a number of countries (including the United Kingdom, the United States, Australia and New Zealand) have recently banned (or limited) from participating in the development of 5G infrastructure.

China passed its own FDI screening law in 2019, which entered into force in January 2020. That regime sits alongside China's so-called 'negative list', which sets out a list of sectors and infrastructure in which foreign investment is forbidden or limited.

Perhaps ironically, fear of foreign investment from countries with historically restrictive FDI regimes (eg, China) has prompted nations to implement their own FDI screening regimes. Notwithstanding the passage of the FDI screening law, China has been progressively reducing the number of restrictions on its negative list – permitting greater levels of FDI.

As noted above, if the NS&I Bill is enacted in its current form, the secretary of state will have the right to call in transactions that completed or are in progress as of 12 November 2020.

The call-in right is limited to situations in which the secretary of state reasonably suspects that:

The meaning of 'qualifying assets' is equally broad and includes "land, tangible moveable property, and ideas, information or techniques which have industrial, commercial or other economic value".(4)

The meaning of a 'trigger event' depends on whether a transaction involves a qualifying asset or a qualifying entity.

The acquisition of a right or interest in, or relating to, a qualifying asset that provides the ability to:

Under the NS&I Bill, the mandatory regime applies to so-called 'notifiable acquisitions', which are defined as occurring where:

The NS&I Bill does not define the 'specified description' but the government's Statement of Policy Intent states that this will be defined by reference to the 'core areas' and 'core activities' which the government considers are most likely to give rise to national security risks. The core activities and areas include:

These industries are to be confirmed by way of separate regulations passed under the NS&I Bill after it has been enacted.

Trigger events that do not fall within the ambit of the mandatory regime (eg, because they do not relate to core areas or activities or do not involve the acquisition of an entity) are subject to a voluntary notification regime.

The voluntary regime is not suspensory and so it is possible to complete a transaction without obtaining prior approval. However, the secretary of state retains a call-in right relating to non-notified transactions that fall within the scope of the voluntary regime for up to six months from the date on which they became aware of the transaction (subject to a long stop date of five years).

Balancing fear and greed: what does the review process look like?

Figure 1 sets out the steps that businesses will need to take under the proposed regime in order to assess whether their transactions may be subject to either a mandatory notification requirement or would fall within the voluntary regime. 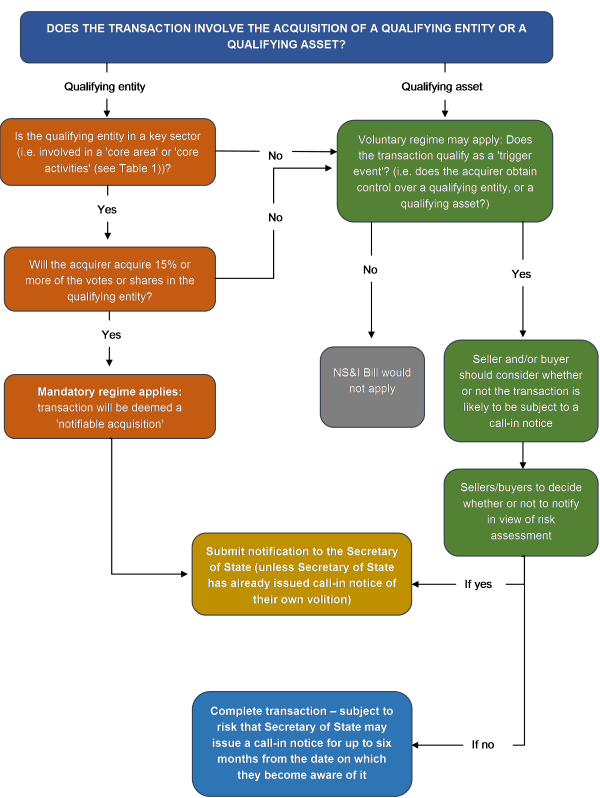 In view of the retrospective application of the secretary of state's review right, parties involved in transactions should now consider whether they may be caught by the new screening regime when the NS&I Bill is enacted.

The issuing of a call-in notice triggers a 30-working day 'initial period' in which the secretary of state will assess whether the transaction could give rise to national security concerns.

This initial period can be unilaterally extended on notice from the secretary of state by 45 working days or voluntarily extended by agreement with the acquirer. There is no time limit on the length of a voluntary extension of time.

The secretary of state's review process is set out in Figure 2. 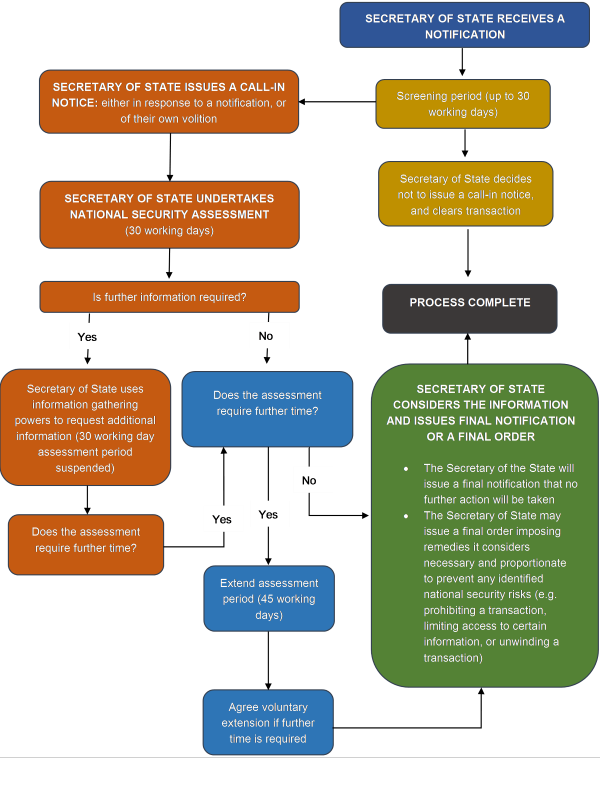