Imagine a scenario where you are a new member of a deal team that has been working on the same deal day and night for months, but just can’t seem to close. As a new member of the team, you’re still fresh and optimistic, but the rest of the team seems tired and frustrated. Being an alpha, driven, can-do, closer type personality, your first instinct may be to whip the team into shape and drive this harder. But if your team is suffering from deal fatigue, a hard-driving approach could cause your whole program to hit the brakes, or even derail.

In Part 1 of this series, we noted some warning signs that the team is weary. We also discussed how muddling along, without recognizing and adjusting for deal fatigue, can be counter-productive because the fundamentals required to negotiate a good deal are compromised. Below we outline some deal process contaminants that, if left untreated, could fester.

Although there are certainly many causes of deal fatigue, one of the repeat offenders is a deal process that kept advancing from one step to the next without having laid the proper foundation. Again, this happens for a variety of reasons, but usually it is because (i) the deal process is being driven too fast; (ii) the management team fails to understand the stress that a transformational program can put on an organization; and/or (iii) a manager who has relevant experience in a prior organization fails to take into account the operational readiness difference between the companies, creating unrealistic expectations.

These missteps can lead to a deal team perception that they are jumping into something they don’t completely understand and can’t fully embrace. This can lead to paralysis by analysis, retracing process steps, endless proposal iterations, miscommunicated requirements and solution points, premature down-selection, premature contract negotiations, and, if allowed to continue, a failed transition and a failed program.

The irony is that the harder and faster the deal is pushed, the more devastating the effects of deal fatigue become. Rather, the best way to cross the finish line quickly is to slow down and apply methodical corrections. The good news is that this scenario can be fixed, but it requires an honest assessment to determine where the deal process got ahead of itself.

The table below provides a few examples of root causes, and resulting symptoms, of deal fatigue. Because some of these underlying issues can be sensitive, how you conduct this discussion and how you share information will vary depending on whether you are an inside or outside resource and how much experience and credibility you have with the team. 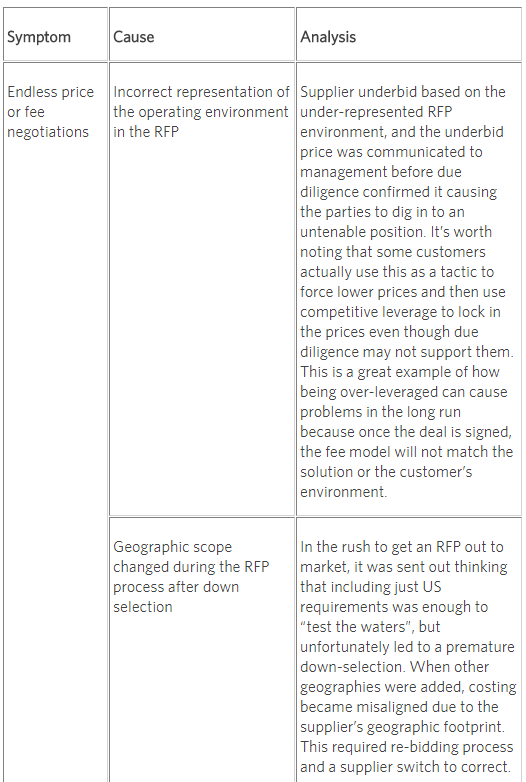 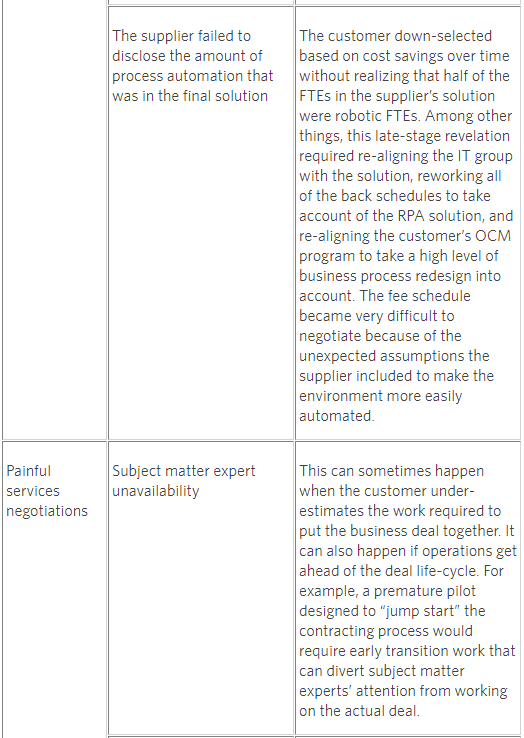 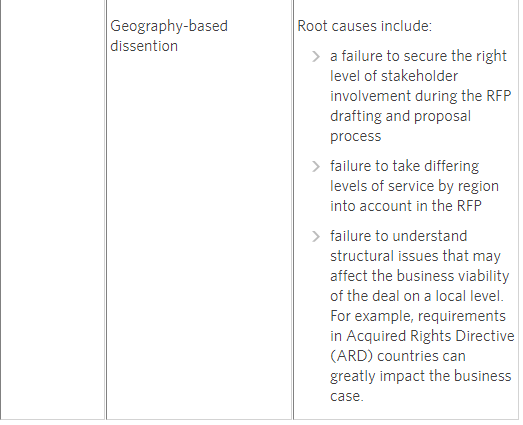 These hurdles tend to follow early deal process mistakes or miscommunication, which are often by-products of trying to accelerate the deal beyond practicality. Although one could argue that the world is rapidly changing and a full-blown deal process takes too long, the alternative is taxing. Getting stuck in endless negotiations, signing a deal that could lead to a program failure, and destroying the spirit of the team that must advocate a business transformation is far from a recipe for success.

In Part 3 of this series, we will suggest several ways to avoid deal fatigue and speed up the deal process, while maintaining a solid methodology.