Over the past several months, there has been much speculation regarding potential changes to corporate and individual tax rates. The infrastructure plan released by the White House on Wednesday, March 31, includes a proposed increase to corporate income tax rates from 21% to 28%.

The graphs below illustrate the relative tax costs of certain tax rate proposals that have been discussed. There are four scenarios, each of which makes a different assumption as to individual ordinary tax rates (37% with and without a state and local tax (SALT) deduction and 39.6% without a SALT deduction) and capital gains tax rates (20% and 39.6%). Each scenario compares the net tax cost of utilizing a corporate structure at different corporate tax rates (21%, 25% and 28%) to the net tax cost of a flow-through structure based on the individual rate assumptions of such scenario (with and without the 20% Section 199A deduction). We include a present value component with each alternative, which assumes corporate earnings are retained for five years before being distributed (or realized as capital gain on a sale of shares) and utilizes a 5% discount rate. The analysis assumes a SALT rate of 10% for individuals and 5% for corporations. The analysis does not factor in the relative tax costs of gain on a sale (including the possibility of some ordinary income upon a sale in a flow-through structure and the step-up benefit to a buyer in a flow-through structure).

The graphs illustrate that, while an increase in corporate rates can result in a higher tax cost in a corporate structure relative to a flow-through structure on an absolute basis, absent applicability of a 199A deduction the differences in the first three scenarios are relatively small and on a present value basis the corporate structure still yields a lower net cost. The only exception is if the top individual rate on capital gains (and presumably dividends) increases to 39.6%, as illustrated in Scenario 4.

Federal tax rates are only one important piece of the structuring puzzle. Funds and other investors must take into account many tax considerations when determining how to best structure an investment, including incentive equity arrangements, the U.S. taxation of income earned abroad, basis step-up on an exit, SALT filing obligations, and the three-year holding period applicable to certain carried interests. Aside from tax, investors may favor a simple corporate holding structure rather than one that presents administrative complexity. But the graphs below may help in analyzing the potential impact of the proposed tax rate changes on a fund’s decision whether to utilize a corporate or a flow-through structure while Congress considers alternative proposals.

The illustrative tax costs below are based on taxable income of $100. 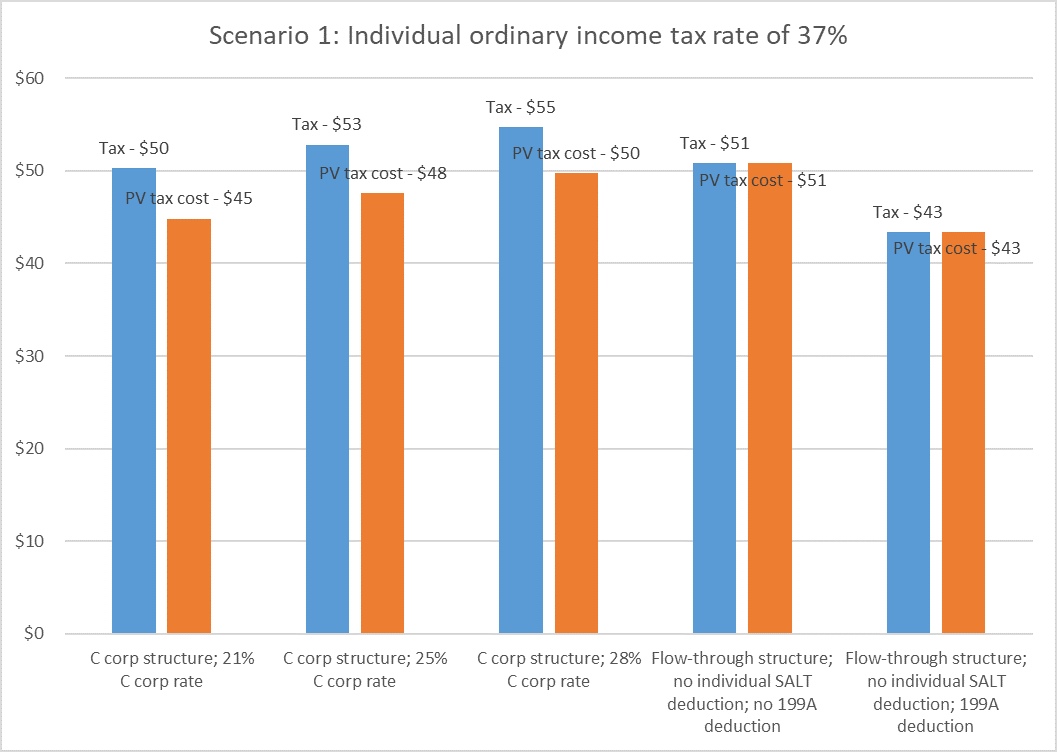 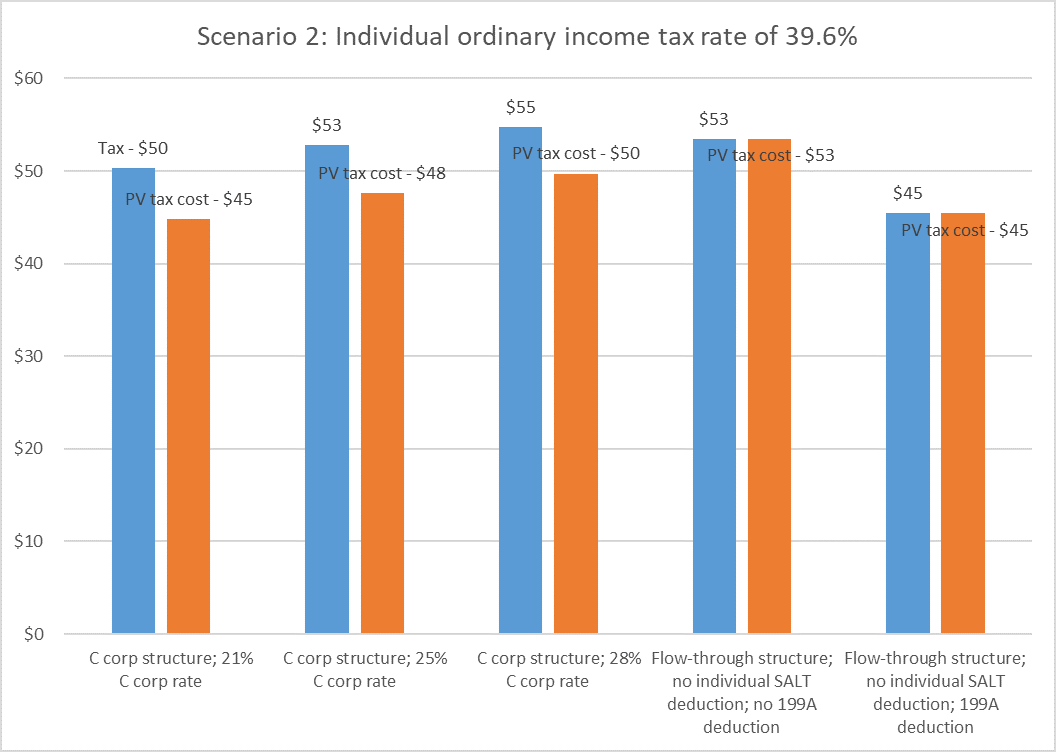 Key assumptions and inputs in Scenario 2: 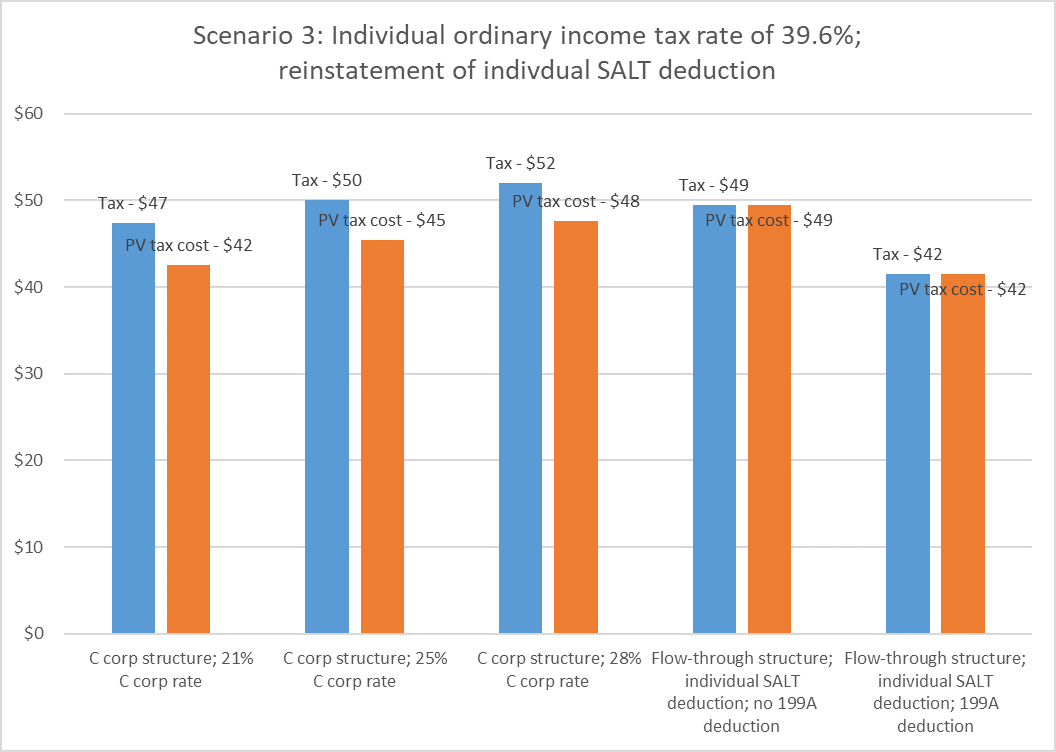 Key assumptions and inputs in Scenario 3: 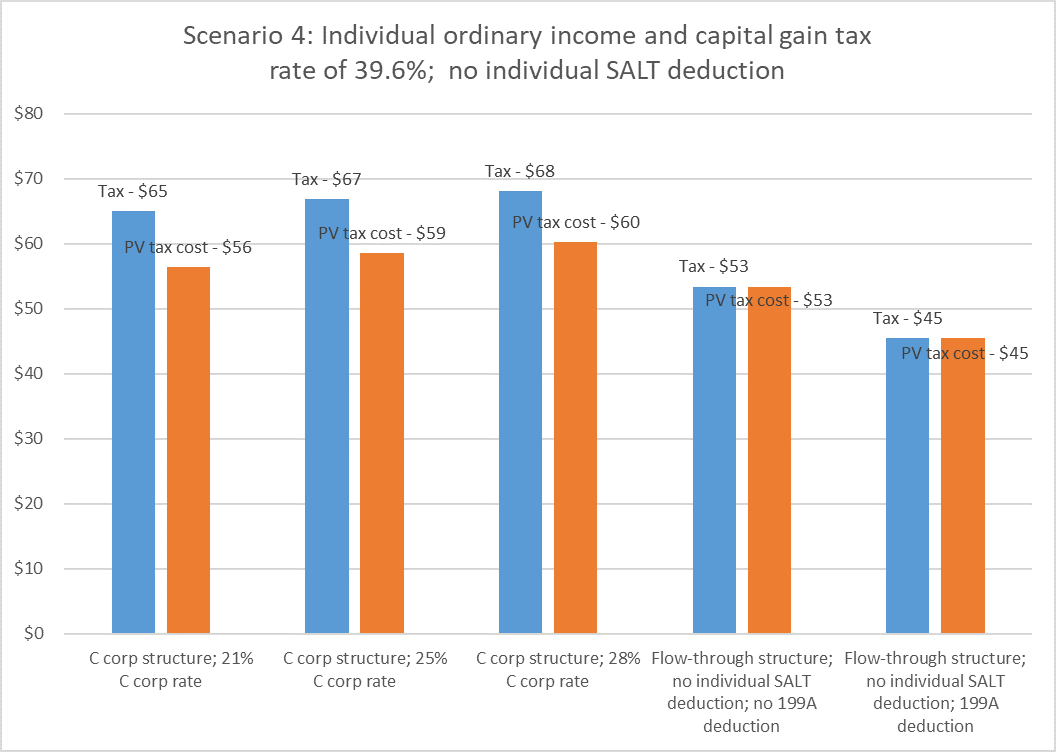 Key assumptions and inputs in Scenario 4: